A couple of months ago in a Remnant Underground episode, I noted that the so-called "red wave" had crashed far out to sea and wasn’t likely to materialize.

That, alas, is how the midterm elections went down.

Ever since the Dobbs decision, the demon sharks have tasted blood in the water. Dobbs gave new life to their anti-life cult. Every night, they took to the airwaves to beat the war drums against the unborn, using fear and manipulation to fire up their base of Millennials and Gen Z-ers – perhaps the most clueless generation in the history of this Revolution. According to exit polls, had it not been for the 18- to 35-year-olds, there would indeed have been a red wave. They came out en masse and turned the red wave into a red ripple.

This is an interview with Archbishop Viganò which was conducted live at the Catholic Identity Conference in Pittsburgh on October 2, 2022. All talks at the CIC have been recorded and are available to watch via Video Subscription HERE. 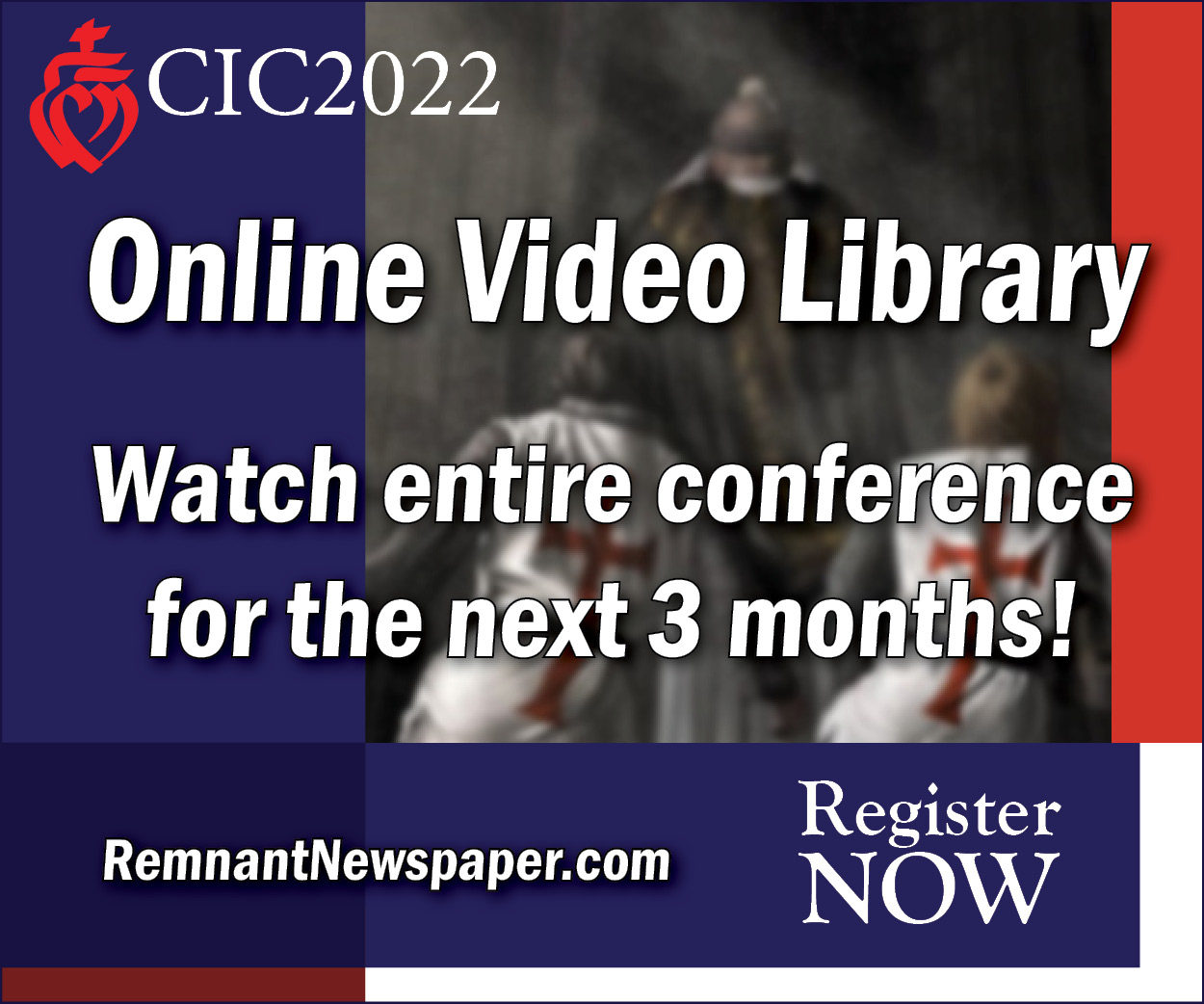 In this edition of The Remnant Underground, Michael Matt lays out a new course of action in the wake of YouTube’s decision to take Remnant TV off the air.

Citing National Public Radio’s diabolical decision to broadcast an abortion live, Michael warns that America is facing the end of the world as we know it.  Here’s why the midterm elections actually do matter this time…perhaps more than ever before in the history of this country.

In a stirring rallying cry to the clans around the world, Michael challenges RTV viewers to do the right thing, to keep hope alive, and to make this moment a defining moment of change for all those who are still willing to do whatever it takes to save this nation, to save the family, and to become the fighters for truth that God is calling us all to be.

Bless Me, Father, For I Am Going Trick-or-Treating

In a few hours, I’ll be taking my youngest son trick-or-treating in a wonderful old neighborhood in smalltown Wisconsin. We’ve been “doing Halloween” there for years, with relatives who live there year-round.

Call me a sentimentalist, but some of my fondest childhood memories date back to Halloweens from a long time ago.  And though this is not meant to be a comprehensive treatment of the question, here are a couple of thoughts on Halloween, hastily jotted down just before heading out the door.

QUESTION: With 90-year-old Joseph Cardinal Zen on trial this week for defying the Chinese Communist Government, where's the Vatican? Why is pope Francis not speaking out in Zen's defense?

In this episode of The Remnant Underground, Michael takes a look at this question, as well as the ramifications of two recent developments:

Both of these developments come as a threat to the globalists, including Team Francis inside the Vatican, especially where Number 2 is concerned.  If Tony Fauci needs to be help responsible for crimes against humanity, certainly so too should Pope Francis.

UK Cardiologist on COVID Vax Mandates: Doctors and citizens have a "moral obligation to disobey"

Please share this video! Big Tech doesn't want this to get out!

Dr. Aseem Malhotra is an award-winning Consultant Cardiologist, Fellow of the Royal College of Physicians, and President of the Scientific Advisory Committee, “The Public Health Collaboration”, and today he is urgently warning against the dangers of the COVID Vaccine.

Our new big-time RTV sponsor just pulled their ads. Find out why!

Speaking of extremist nutjobs, the CDC have determined that Americans have got to you-know-what their little kids if they want them to go to school.

"Yes, but why, when kids are at no statistical risk?"

GLOBALISM'S EXORCISM: Why These US Midterms Matter

In this episode of The Remnant Underground, Michael Matt looks at November's midterm elections from the viewpoint of the globalists. The world is watching. The Vatican is watching.  The World Economic Forum is watching. Will the midterms matter? How so when for so long the ballot box has been little more than a suggestion box for the slaves?

NEOCONS & WARHAWKS: Can Anyone Stop the Democrat (War) Party?

In this episode of The Remnant Underground, Michael Matt takes a hard look at two issues of international urgency:

1) Pfizer’s shocking admission to a MEP on the floor of the EU parliament.

With respect to Number 1: Whom are we to judge first for this crime against humanity? Pope Francis? Bill Gates?

With respect to Number 2: Do those who support US intervention in Ukraine realize that they’re also supporting World War III? And as if that weren’t enough, do they realize with whom they’re in bed, i.e., Justin Trudeau, Barack Obama, and George Soros?

THE CARDINAL'S WARNING: "A hostile takeover of the Catholic Church"

In this week's Spotlight, we highlight all of the quotes from Gerard Cardinal Müller's bombshell October 2022 interview on "The World Over."  This is such a big deal!  It's Archbishop Lefebvre on Assisi.  It's Archbishop Vigano on the Vatican/McCarrick sex coverup.  The Vatican does NOT want this interview to go viral, so let's make sure it does. Francis's Synodal Church is going to bring about, according to Cardinal Müller the "end of the Catholic Church!"

Published in Fetzen Fliegen
Tagged under
Read more...
Page 4 of 286