Argentine actress and singer Martina Stoessel, who portrays Disney Channel's "Violetta", sits in the Paul VI Audience Hall to meet with Pope Francis at the Vatican, Monday, Sept. 1, 2014 a few hours before the inter-religious soccer match for peace.

Here Pope Francis poses with his soccer ball, his potted tree and the players in the Paul VI Audience Hall before the match: 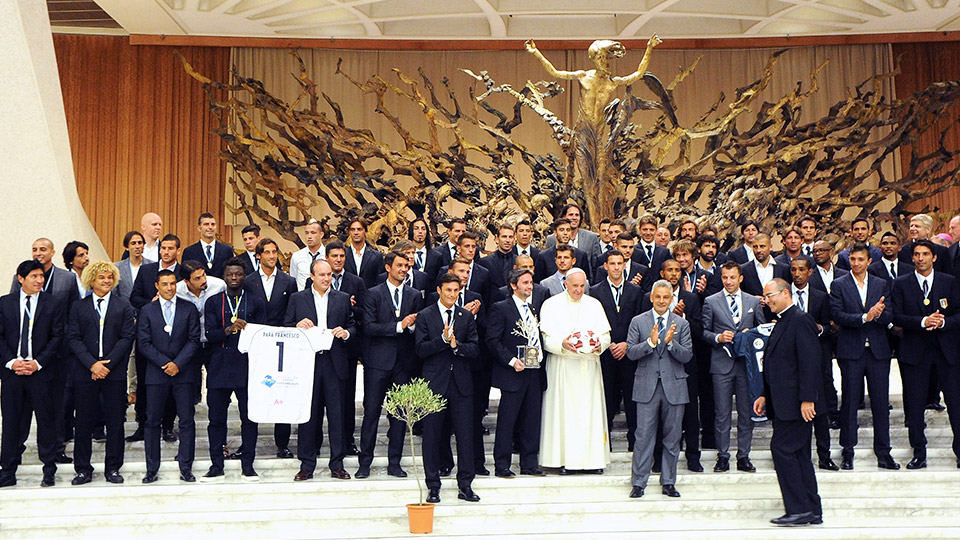 And below is the pre kick-off performance, complete with the Argentine singer's rendition of the Marxist anthem, "Imagine", written by John Lennon and featuring the famous lyrics: "Imagine there's no heaven/It's easy if you try. No hell below us/Above us only sky.  Imagine there's no countries/It isn't hard to do. Nothing to kill or die for/And no religion too."

Please, Holy Father, our children have been scandalized enough by their priests and shepherds without the Pope himself endorsing the dangerous political message of the hippy rockers of yesterday and, at the same time, blessing such gratuitous exploitation of little girls dressed like prostitutes, dancing like strippers, and leading children further into the highly sexualized and degenerate world of pop culture:


Catholic parents all across the world, Holiness, are working day and night to keep our children out of the clutches of the perverse abusers of children and destroyers of innocence in the pop music industry.  This is not helping.

For God's sake and the sake of our children, please stop using the Chair of St. Peter to offer tacit approval to this Godless rot which is so offensive to Our Lady and so injurious to purity, holiness and the pursuit of sanctity.

Published in Fetzen Fliegen
back to top
Last modified on Wednesday, September 10, 2014
Tweet

More in this category: « Prominent Italian Journalist: 'A great darkness surrounds Rome' Francis to Beatify 'Jimmy Carter of Popes' at Close of Synod? »