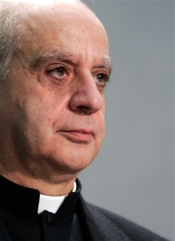 In a recent Vatican Insider interview, Archbishop Rino Fisichella, President of the Pontifical Council for the New Evangelisation, deigned to offer his advice to the Synod regarding the problem of Communion for divorced and remarried Catholics. When asked if he would readmit remarried divorcees to the Eucharist in certain cases, Fisichella responded as follows:

“I don’t want to start judging and theorising based on specific cases. But who in today’s world can say they have not had cases of members of their own families living together or divorcing? Unfortunately, we are immersed in a reality in which the beauty of marriage has been wounded. There has been too much emphasis on the Canonist, or legal, dimension of marriage, which has led us often into the waters of legalism. Recuperating the sacramental dimension would make it easier to find different solutions, in continuity with original doctrine. Here we return to the primacy of conscience. Nothing and no one can intervene in this. Of course, it must be a conscience that is illuminated by the Word of God, that is reflected upon and that accepts the obedience of a path.”

Thus, Archbishop Fisichella would apparently leave the decision to receive Holy Communion up to the consciences of public adulterers; but only as long as their consciences “accept the obedience of a path.” Which path we are not told.

Regardless, the real story here is not the inanity coming from Archbishop Fisichella, but why this man is being asked his opinion on such an important moral topic at all.

In 2009 Archbishop Fisichella penned an article in L’Osservatore Romano blasting Brazilian Archbishop José Cardoso Sobrinho for excommunicating two doctors who aborted the twin babies of a young pregnant Catholic girl called “Carmen.” As the press repeatedly pointed out, the girl had been a victim of rape and was having health complications towards the latter stages of her pregnancy. Her abortionists claimed these complications to be life threatening.

·       Carmen represents a story of everyday violence, and made the pages of the newspapers only because the archbishop of Olinda and Recife was quick to declare the excommunication of the doctors who helped her to interrupt the pregnancy.

·       It is true, Carmen was bearing within herself other lives innocent like her own, even if they were the result of violence, and they were suppressed; but this is not enough to bring down judgment like a hammer.

·       In the case of Carmen, there was a confrontation between life and death. Because of her extremely young age and precarious health conditions, her life was in serious danger from her pregnancy. What should be done in these cases? It is a difficult decision for the doctor, and for the moral law itself. Decisions like these, under varying circumstances, happen daily in the intensive care units, and the doctor's conscience is left alone to decide what is the best thing to do.

·       Carmen, we are all on your side. We share the suffering that you have felt, we want to do everything we can to restore the dignity that has been taken from you and the love that you will need even more. There are others who deserve excommunication and our forgiveness, not those who allowed you to live and will help you to recover hope and trust in spite of the presence of evil, and the wickedness of many.

The question Vatican Insider should be asking Archbishop Fisichella is not what he thinks about Synod, but how he in good conscience can call himself a Catholic Archbishop. Fisichella’s stunning article was eventually responded to by the Archbishop José Cardoso Sobrinho’s Archdiocese. Some key quotes follow:

·       We do not agree that the "decision is hard... for the moral law itself". Our Holy Church continues to proclaim that the moral law is exceedingly clear: it is never licit to eliminate the life of an innocent person to save another life. The objective facts are these: there are doctors who explicitly declare that they perform and will continue to perform abortions, while others declare with the same firmness that they will never perform abortions. Here is the declaration written and signed by a Brazilian Catholic physician: "As an obstetrician for 50 years, graduated in the National Medical School of the University of Brazil, and former chief of Obstetrics in the Hospital of Andarai, in which I served for 35 years until I retired in order to dedicate myself to the diaconate, and having delivered 4,524 babies, many from juvenile mothers, I never had to resort to an abortion to 'save lives', as well as all my colleagues, sincere and honest in their profession and faithful to their Hippocratic oath."

·       We are convinced that the disclosure of this therapeutic penalty, the excommunication, will do much good to many Catholics, making them avoid this grievous sin. The silence of the Church would be very prejudicial, especially considering that fifty million abortions are being performed every year around the world, and in Brazil alone one million innocent lives are ended. Silence may be interpreted as collusion or complicity. If any doctor has a "perplexed conscience" before performing an abortion (which seems extremely improbable to us), he should – if he is a Catholic and wishes to follow the law of God – seek a spiritual director.

·       The article is, in other words, a direct attack {on} the defense of the lives of the three children vehemently made by Archbishop José Cardoso Sobrinho and leaves evident how much the author does not have the necessary data or information to speak on the matter, due to his utter ignorance of the facts. The hospital in which the abortion on the little girl was performed is one of those in which this procedure is always performed in our state, under the cover of "legality". The doctors who acted as executioners of the twins declared, and still declare in the national media, that they did what they are used to doing "with great pride". One of them even said, "Well, I have been excommunicated many times".

·       The author believed he could speak about a situation he did not know, and, what is worse, he did not even take the trouble of first speaking to his brother in the episcopate, and, for his imprudent attitude, he is causing great scandal among the Catholic faithful in Brazil. Instead of seeking his brother in the episcopate, he chose to believe in our openly anti-clerical press.

In his recent interview regarding the Synod, Archbishop Fisichella says the Church “embraces everyone like a mother, not like a judge.” Yet the mother of Carmen “embraced” her child’s suffering by handing her over to abortionists who then snuffed out the life of her children. While in the same case, it was Archbishop Sobrinho, acting as a judge, who excommunicated those responsible for the sake of their own souls. I ask you, dear reader, which act was truly more merciful? And which “certain path” will the Synod take? The path of Abp. Fisichella’s false compassion leading to spiritual death? Or the path of Abp. Sobrinho’s hard truth leading to salvation?

We shall soon see.

Published in Fetzen Fliegen
back to top
Last modified on Friday, October 10, 2014
Tweet

More in this category: « Letters from Hell: A Modernist Priest Tells Pius X How They Will Triumph Outstanding EWTN Interview »