Saint Annibale Bugnini, Pray For Us! 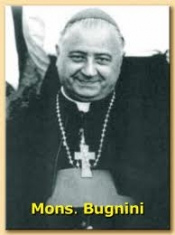 The Remnant wishes to congratulate all those who worked so tirelessly to maintain the cause of the great Pope Paul VI and whose faithful commitment to the memory of the holy, saintly and heroic late pontiff has resulted today in his beatification in Rome. You guys, whoever you are, never gave up on the Rock—and that rocks!

We have no idea who you are, if you are, where you live or even if you live, but you know what? We love you! Quite obviously, you represent a worldwide cult of devotion to the wildly unpopular Papa Montini that we didn't know existed. We didn’t know anyone even remembered Pope Paul VI, in fact, but you guys knew it and you never surrendered. Well played!

To us you are such an inspiration that we have decided to lay down our self-absorbed promethean neopelagianism in order to get with the saint-makin’ program TODAY. Without further ado then, we call on Bishop of Rome Francis to beatify the real unsung hero of the Vatican II era and, let’s face it, a guy we really misjudged: Archbishop Annibale Bugnini—the Father of the Novus Ordo Mass, which, so far, has yielded countless fruits, especially in the curia.

Now, granted, Bugnini was widely suspected of being a Freemason, but that was a long time ago and we’re pretty sure Francis is looking for a new, exciting and enchanting pastoral outreach program for freemasons. In fact St. Albert Pike, dang it! Right? I mean, why not!

We’re absolutely confident that those millions and…and… billions and…and…even quadrillions of nameless and faceless devotees of Paul VI who today made it impossible—just impossible!—for the Vatican not to beatify him, will eventually get around to proving the obvious—that Archbishop Bugnini, despite his freemasonry, died in the odor of sanctity and now enjoys the beatific vision.

What about a miracle, you ask? The New Mass, baby! Forty-five years later, and that piece of worthless liturgical tripe is still here. Now THAT’S a miracle!  Obviously, Bugnini was no more a great liturgist than Blessed Paul was a great pope. But he, like Paul, was a holy, holy guy!

The public allegations of Bugnini's suspected Freemasonry were raised in the 1970s, but who were those guys to judge—whoever they were? Blessed Pope Paul VI commissioned a full investigation into the matter, appointing the Canadian Cardinal Gagnon (then archbishop) to conduct it. Eventually, Saint Annibale (oh, why not!) was banished for his belief in the Divine Architect and packed off to Iran by Blessed Paul. In fact, it was because of this one massive prudential error on Blessed Paul’s part that it took so long for him to be beatified. (What was the holy man thinking!?)

But that was then. Today we’re looking to the future and we see a day coming when St. John Paul and St. John XXIII holy cards will be sold on the Piazza San Pedro back-to-back with St. Paul VI and St. Annibale Bugnini holy cards. Now how cool would that be!  It’s not only cool, my friends, it’s possible…very possible. As the great mystic, Steve Perry, was wont to remind us, don’t stop believin’!

Obviously, Banished Bugnini suffered a great deal for his faith and we demand that he be the next hero of Vatican II to be canonized by Bishop of Rome Francis. Dare we hope? Dare we dream?  Dare we believe in miracles? You bet, and we call it Operation BBSS: Banished Bugnini, Santo Subito!

In the name of liberty, equality and fraternity. Amen

Published in Fetzen Fliegen
back to top
Last modified on Monday, October 20, 2014
Tweet

More in this category: « BREAKING: Ft. Worth Diocese (Bishop Olson) Uses Ebola Scare to Ban Communion on the Tongue A Handy-Dandy Summary of Michael Voris’ Position »