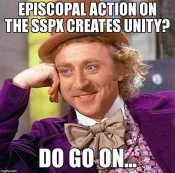 The irony is that if Catholics in Bishop Semeraro’s diocese received sacraments from truly schismatic Orthodox priests they would not be excommunicated at all. So is the Orthodox church somehow in “friendly schism” while the SSPX is in “naughty schism?”

Tuesday, November 4th, I wrote a blog piece regarding the implications of two bishops presuming to excommunicate Catholics who receive sacraments from the SSPX. On the same day, the International Una Voce Federation echoed my sentiments, stating that these excommunications may be illegal. Unfortunately, a third commentary on this event was posted on the same day, much unlike the others. That piece was Episcopal action on the SSPX: A basic strategy for unityby Neo-Catholic apologist, Dr. Jeff Mirus.

In the piece, Mirus states the following:

…it is important to understand why some bishops are adopting this policy. It has nothing to do with the question of whether the SSPX bishops are excommunicated (which is no longer the case), or whether the SSPX is formally in schism (about which the popes have been noticeably coy while seeking to restore full communion). Nor are those who avail themselves of sacraments administered by SSPX priests either in schism or universally excommunicated by that fact. Arguing (as theLatin Mass Society of England and Wales has) that Bishops Semeraro and Sarlinga are on shaky ground because such universal judgments are not in force would seem to miss the point. Rather, at this time such excommunications are imposed diocese by diocese, according to the judgment of the local ordinary. This is because the SSPX constitutes a direct attack on ordinary episcopal jurisdiction in the Catholic Church.

There already exists in English, the word “contradiction” which means a logical incompatibility between two opposing statements. However, I believe the word for what Dr. Mirus does here (and what his Neo-Catholic brethren do constantly) needs a new term to describe it. Contradiction alone does not do it justice. More than simply positing a contradiction, Mirus brazenly, in full view, and with no explanation or apology, has presented to the world a logic about this story that is completely incongruous and fails on its face. He will then, no doubt, move on to his next commentary blissfully unaware of what he just did. In any case, I submit my proposal for a new term for such behavior to the comments section for suggestions.

First, the very title of Mirus’ piece is a contradiction: Episcopal action on the SSPX: A basic strategy for unity. Somehow, in Dr. Mirus’ strange world, an inconsistent piecemeal “strategy” where Catholics who receive SSPX sacraments are excommunicated in some dioceses and in “full Communion” in others, depending on the whim of each bishop, is somehow one of unity! If by “unity” Dr. Mirus means “division”, “injustice”, “disorder”, and “total chaos,” he would be absolutely correct.

Second, Dr. Mirus amazingly states that the bishop’s actions have “nothing to do” with “whether the SSPX is formally in schism (about which the popes have been noticeably coy while seeking to restore full communion).” No, Dr. Mirus, it has everything to do with whether the SSPX is in schism, for this is the entire pretext on which the two bishops in question base their excommunications.

If you study the two bishops’ statements closely you will see that they “coyly” use new conciliar terminology, but the substance of what they are saying is based on the traditional (true Catholic) understanding of schism and excommunication. Dealing with the SSPX is indeed the only occasion where conciliar churchmen ever trot out the old concepts of schism and excommunication. In the past, these churchmen would have at least had the honesty to use these terms openly. Now they are choosing to be more stealthy, using the more ambiguous conciliar-speak to their advantage.

Otherwise, how can he justify the proposition that Catholics who request sacraments from SSPX priests are excommunicated de facto? The irony is that if Catholics in Bishop Semeraro’s diocese received sacraments from truly schismatic Orthodox priests they would not be excommunicated at all. In fact, the new Code of Canon Law actually permits Catholics to receive sacraments from schismatic Orthodox priests in certain circumstances. Perhaps Dr. Mirus can come up with additional modifiers to the word “schism” to explain this discrepancy. Is the Orthodox church somehow in “friendly schism” while the SSPX is in “naughty schism?”

Furthermore, Mirus’ claim that all popes since Paul VI have merely been playing “coy” by not formally declaring the SSPX to be in schism is the height of Neo-Catholic hypocrisy. The same Neo-Catholics who constantly tell us to assume the best and most straightforward intentions and motives on behalf of the pope, are now somehow able to divine that the last five popes have known all along that the SSPX was in schism, but were hiding it from the faithful in order to be diplomatic. Apparently, the idea that no pope has declared the SSPX to be in schism because the SSPX has never been in schism has never crossed Dr. Mirus’ mind.

Mirus then attempts to act diplomatic and fair about the whole ordeal by giving lip service to the hypocrisy of bishops in ignoring liberals while disciplining the SSPX. Mirus even encourages bishops to discipline liberals, knowing full well that there is a better chance of Pope Francis reclaiming the papal tiara, swearing the anti-modernism oath, and offering a Tridentine Mass for Christ the King, than one bishop taking his half-hearted advice.

Finally, the most interesting and ironic aspect of Mirus’ “strategy for unity” is probably one he never considered. While indignantly defending each bishop’s right to take the SSPX issue into his own hands and ignoring what Rome has to say on the matter, Mirus states the following:

It does not really matter what the SSPX sees itself as doing. The simple fact is that no bishop (let alone an illicitly ordained bishop) can send priests into another bishop’s diocese to administer the sacraments without those priests receiving faculties from the local ordinary. To do so is an assault on the proper authority of the local ordinary, who receives his jurisdiction from the successor of Peter. It is hardly surprising that Catholic bishops should be sensitive on this point. In fact, they are correct to be more sensitive to this issue than to almost any other. After all, for a Catholic to utilize the ministry of SSPX priests is, however muddled the intention, an escape from the jurisdiction of his real bishop and, by extension, of the Catholic Church itself.

Ok. So, what if bishops like Athanasius Schneider and Cardinal Ranjith take Mirus up on his offer, agree that SSPX priests should not be administering sacraments in their dioceses without jurisdiction, and then proceed to grant SSPX priests in their dioceses that jurisdiction? After all, if Bishops Semeraro and Sarlinga are free to take their own negative independent actions towards the SSPX, shouldn’t other bishops have the freedom to take positive actions towards the SSPX? What if a third bishop wants to completely regularize the SSPX in his diocese as a recognized religious order? Then you could have the absurd situation of Catholics in one diocese licitly assisting at SSPX masses with no restriction while Catholics in a neighboring diocese being excommunicated for doing the same. A strategy for unity indeed!

More in this category: « As the Bishops Turn Up the Heat, Should the SSPX Sign a Deal? I say full communion, you say partial communion. Let’s call the whole thing off »