Another proud moment to be a Catholic in the "renewed" and modern Church, brought to you by the "Springtime of Vatican II":

- One monk named in the files is Father Finian McDonald, who admitted to having 200 'partners' - including children - during his priesthood

- St. John's Abbey is one of the largest Benedictine monasteries in North America

The files on several monks from St. John's Abbey in Collegeville, Minnesota were made public Tuesday and suggest that 19 of the men may have abused hundreds of children for more than five decades.  Read more here, if you can stomach it.

REMNANT COMMENT: I'll forego the usual wailing and gnashing of teeth over this latest and dazzling jewel in the crown of the Modernist revolution in the Church. Instead, let's consider an architectual example that may help us understand what really happened at St. John's Abbey.

Here is St. John's Abbey from back in the day, when my father and grandfather used to make regular road trips up to Collegeville to try to talk Fr. Virgil Michel and his friends down off the ledge of the early liturgical movement: 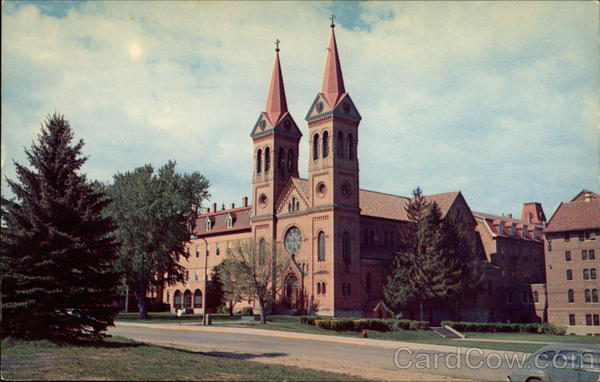 Now, after the likes of Father Michel, Godfrey Diekmann and much worse (e.g., Abbot Baldwin Dworschak, OSB) had  had their way with this grand Benedictine monastery, this is what happened to the abbey church: 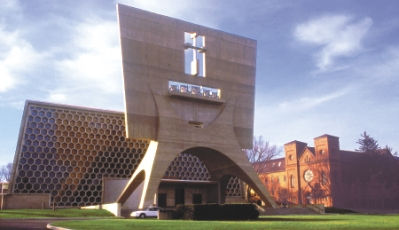 Take note of the eerie symbolism evidenced in the stones themselves and still on display to this very day: Notice how the old church (pictured in the background above) had its steeples quite literally lopped off half-way up. Why was this  double decapitation necessary, which inadvertently toppled the two steeple crosses in the process? Who was the architect, Count Dracula!

Well, here's a theory: The old steeples had pointed to heaven for more than a century, lifting eyes, minds and souls to God. They had to be removed to accommodate the new humanism and man-centred liturgy that was just beginning to be ushered in at that time.

The official reason for this act of blatant vandalism was that the bells had to be removed and placed in architect Marcel Breuer's monstrosity (the concrete jumbotron you see pictured above).  So, if you need to move the bells, the first thing you do is knock the steeples down? Huh?

St. John's Church of the Unholy Jumbotron, by the way, was completed on August 24, 1961-- just three months before the Second Vatican Council was formally summonded by the apostolic constitution Humanae Salutis.

Ah, yes, the winds of change--back in those early days of Modernist revolution they blew steeples to the ground, obliterated high altars, spirited the old Latin liturgy into a prison cell, blew cassocks off of priests, drove enitre orders of nuns out of their convents and gaining momentum like some demonic tsunami, eventually drove untold millions of Catholics out the Church.

First steeples, then altars, then sanctuaries, then venerable old statues, then communion rails--and  then finally the faith itself. It was all part of the plan, and you can trace the Revolution's progress by following the tracks of the bulldozers.

As far as many church-going Catholics were concerned, the Modernist revolution entered the Church on wrecking balls and felt banners in the1960s. But with 20/20 hindsight, we know it had been some time coming before the wreckovators had grown so bold. It was brewing in quiet places like Collegeville, Minnesota for decades before it dared raise it ugly, defiant head in the great cities and cathedrals of the world.

The Abbey of St. John is now a metaphor for the Modernist revolution--so hip, so cool, so new 50 years ago--but now so empty and old, rotting and stinking, plagued by scandal.  Finally, the chickens of St. John's Abbey are coming home to roost, but there are no victors here save for the enemies of Christ's Church, who from the very beginning were plotting--not for aggiornamento, not for a kinder, gentler Church, not for a Church that would be more sensitive to the needs of the modern world, or any of the other lies that comprised the lexicon of Modernist revolution.

No, from the very beginning they were plotting the total destruction and eradication of the Catholic Church from the face of the earth. Steeples, high altars, Latin Masses, nuns, priestly celibacy--it all had to go. You can read it in the stones. You can see exactly what they were up to.  Only now it's too late. Right?

Well...maybe not. That's up to us. Now that we know exactly what this was all about right from the start, perhaps a good New Year's resolution would be to never set foot in another New Mass ever again.  It's what my wife and I did when we began our married life together 20 years ago, and we've never looked back.

[Comment Guidelines - Click to view]
The Remnant values the comments and input of our visitors. It’s no secret, however, that trolls exist, and trolls can do a lot of damage to a brand. Therefore, our comments are heavily monitored 24/7 by Remnant moderators around the country.  They have been instructed to remove demeaning, hostile, needlessly combative, racist, Christophobic comments, and streams not related to the storyline. Multiple comments from one person under a story are also discouraged. Capitalized sentences or comments will be removed (Internet shouting).
The Remnant comments sections are not designed for frequent personal blogging, on-going debates or theological or other disputes between commenters. Please understand that we pay our writers to defend The Remnant’s editorial positions. We thus acknowledge no moral obligation whatsoever to allow anyone and everyone to try to undermine our editorial policy and create a general nuisance on our website.  Therefore, Remnant moderators reserve the right to edit or remove comments, and comments do not necessarily represent the views of The Remnant.
back to top
Last modified on Saturday, November 28, 2015
Tweet

More in this category: « Pope Francis: The Great Clarifier We Need A Martyr Pope Who Will Clean House »