The Last Word on St. Valentine 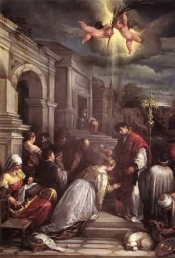 St. Valentine Baptizes St. Lucilla
Why did the revolutionary church of the 1960s drop Saint Valentine from the liturgical calendar?

One of the common practices in the United States and in many other regions of the world is that of exchanging valentine cards on February 14. Even as children many boys and girls exchange cards and candy, not for a romantic reason but for fun and friendship. We have a rule in my parish school that if you bring a valentine for anyone you have to bring a valentine for everyone—including those you may not like. In this way a somewhat secularized practice is encouraging and reflecting a supernatural quality: love of enemies. As a pastor I am deeply touched by the cards and candy that our children give to me.


How ironic that the name Valentine, which is so popular and universally recognized throughout the secular world, has been abandoned by the modern institutional Church. Yes, along with countless other ancient saints, the revolutionary church of the sixties dropped Saint Valentine from the liturgical calendar. Many other ancient saints fared little better, their feast days having been reduced to “optional” memorials.

Who was Saint Valentine and why do modernists of the Vatican II Church hate this Saint of the Heart? Here is a version of the Saint Valentine story from the web with Last Word parenthetical remarks added:

The story of Valentine's Day begins in the third century with an oppressive pagan Roman emperor and a humble Christian martyr (sounds a lot like modern America).  The emperor was Claudius (nicknamed Claudius the Cruel, who knocked out the teeth of his horse and later an opponent with a single punch). The Christian was Valentinus (a well-educated man who was both a physician and a priest). Claudius had ordered all Romans to worship the twelve false gods recognized by the Empire and had made it a crime punishable by death to associate with Christians (so much for separation of church and state in Rome).

Father Celatus’s “The Last Word” appears in every print edition of The Remnant. If you’re not a subscriber you missed 21 of them last year and you'll miss another 22 this year.
But Valentinus was dedicated to the ideals of Christ; not even the threat of death could keep him from practicing his beliefs (unlike a majority of modern Catholics who fail to practice without any threat of death). Claudius had also banned all marriages in the Empire based on his desire to increase the size of the Roman army since husbands and fathers were hesitant to leave their families for wars (he might have tried opening the ranks to homosexuals, transgendered freaks and women in combat like the U.S. forces).

Father Valentine ignored this unrighteous imperial decree and secretly brought Christian couples into the sacrament of Holy Matrimony. He was eventually discovered, arrested and imprisoned. During the last weeks of the Saint’s life a remarkable thing happened.  Seeing that he was a man of learning the jailer asked whether his daughter, Julia, might be brought to Valentinus for lessons. She had been blind since birth. Julia was a sweet young girl with a quick mind. Valentinus read stories of Roman history to her. He described the world of nature to her.  He taught her arithmetic and told her about God. She saw the world through his eyes, trusted his wisdom, and found comfort in his quiet strength and unshakeable faith.

One day Julia asked, "Valentinus, does God really hear our prayers?" "Yes, my child, He hears each one." "Do you know what I pray for every morning and every night?  I pray that I might see. I want so much to see everything you've told me about!" "God does what is best for us if we will only believe in Him," Valentinus said. "Oh, Valentinus, I do believe! I do!"  She knelt and grasped his hand. They sat quietly together, each praying. Suddenly there was a brilliant light in the prison cell. Radiant, Julia cried out, "Valentinus, I can see! I can see!" "Praise be God!" Valentinus exclaimed and he knelt in grateful prayer.

On the eve of his death Valentinus wrote a last note to Julia, urging her to remain close to God. He signed it, "From your Valentine."  His sentence was carried out the next day, February 14, 270 A.D., near a gate that was later named the Porta Valentini in his blessed memory. Father Valentine was beaten, stoned and beheaded. His body was buried and later exhumed and his remains and relics continue to be honored by the faithful in churches of Rome and Ireland in particular. It is said that Julia planted a pink-blossomed almond tree near his grave; to this day an almond tree remains a symbol of abiding love and friendship.

Valentine is the patron saint of engaged couples, married couples and young people. He is also the patron of beekeepers, those who struggle with epilepsy and plagues (by which Claudius the Cruel fittingly died).

What a touching story. Who but a modernist could not help but be touched by the courage of Valentine and his devotion to Christian couples and a young blind girl. No wonder his name is associated with love. It is said by some historians that this association between Saint Valentine and romantic rituals is due to the efforts of early Christian leaders to do away with pagan Roman festivals associated with February 14. That may be so but now the modernists have done away with the Saint and given his day back to pagans.

So why do modernists hate the Saint of Love, or at least want him off the calendar and out of mind? For many reasons: modernists hate anything that has to do with tradition, in this case, an ancient saint whose name and influence have survived for 1700 years; modernists are rationalists who disbelieve in miracles and so they strip the Gospels and stories of saints of anything remotely supernatural; modernist are revisionists, rejecting or revising ancient accounts, stripping them of history and heroes; modernists hate piety and devotion such that they would rather have their own throats strangled than have them blessed through the intercession of a saint or invoke prayers of an ancient martyr; modernists in many cases are compromisers and cowards and so religious heroism of an ancient martyr convicts their own consciences.

In the spirit of Claudius who said “Away with Valentine!” The Last Word says, “Away with modernists!”

But to all traditional Catholics who honor February 14 as sacred we say, “Happy Saint Valentine’s Day!”

[Comment Guidelines - Click to view]
The Remnant values the comments and input of our visitors. It’s no secret, however, that trolls exist, and trolls can do a lot of damage to a brand. Therefore, our comments are heavily monitored 24/7 by Remnant moderators around the country.  They have been instructed to remove demeaning, hostile, needlessly combative, racist, Christophobic comments, and streams not related to the storyline. Multiple comments from one person under a story are also discouraged. Capitalized sentences or comments will be removed (Internet shouting).
The Remnant comments sections are not designed for frequent personal blogging, on-going debates or theological or other disputes between commenters. Please understand that we pay our writers to defend The Remnant’s editorial positions. We thus acknowledge no moral obligation whatsoever to allow anyone and everyone to try to undermine our editorial policy and create a general nuisance on our website.  Therefore, Remnant moderators reserve the right to edit or remove comments, and comments do not necessarily represent the views of The Remnant.
back to top
Last modified on Tuesday, February 16, 2016
Tweet
More in this category: « Justice Antonin Scalia Remembered (A Remnant Interview) Have they No Shame? »