Anti-Lepanto: Hiding Our Lady for Fear of the Moors 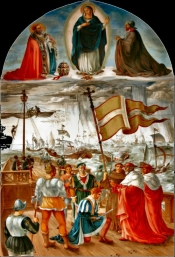 ROME -- Our Lord told his disciples that the proclamation of the Kingdom of God is highly likely to cause opposition, hostility and even persecution. Under these circumstances, Jesus said, “everyone who acknowledges me before men, I also will acknowledge before my Father who is in heaven; but whoever denies me before men, I also will deny before my Father who is in heaven” (Matthew 10:32-33). By extension, this concept may well apply not only to Our Lord, but also to Our Lady, the Virgin Mary: this is precisely the consideration which immediately comes to mind considering what happened on the 19-21 August weekend in Rimini during the annual meeting organized by Communion and Liberation (CL), when a statue of the Virgin Mary was covered by a cloth "to avoid clashes" and religious pictures removed because of the fear of Islamic extremists, as reported not only in il Giornale, but also in other national dailies portals, such as la Repubblica and il Tempo.

It was as if Our Lady la Madonna “had been put on punishment,” in the words of a Shalom Publishing House representative (Shalom Publishing has always been a major attraction of the CL Rimini meeting for the selling of religious books, rosaries, posters and sacred objects).

The representative was further quoted as saying to la Repubblica television reporters, that organizers of the Rimini meeting did not require her to cover the statue, but she decided to do so, "because if anything happened, I would feel responsible".

In the comment of il Giornale, this is the result of the climate of terror that the latest Isis attacks are causing among Catholics of Communion and Liberation. “It is due to these attacks they are waging. They hate la Madonna and then, to avoid (troubles), we covered it", the woman went on, referring to Isis Islamic fundamentalists. "We should have removed it, even because there are so many religions here. It had never happened, we had some pictures here that we were requested to remove. It is to avoid clashes".

Even if the subsequent spate of reactions were generally ignored by the mainstream media, the decision to cover the statue of Our Lady sparked a torrent of criticism in social media networks, including the stance of two bishops thus far. As a spokesman of the many faithful who contacted him via social media, the Bishop of Ascoli Piceno, Msgr. Giovanni D'Ercole, called for the management of the Rimini Meeting to immediately remove the cloth covering statue of la Madonna. This decision is all the more incomprehensible, he contended, in light of his personal “ten-year experience as missionary in Ivory Coast in Africa”, where he realized that “the Virgin does not divide but unites and is loved and venerated by believers of other faiths, including Islam”.

More or less on the same vein is the comment of the bishop of Palestrina Domenico Segalini, who is also secretary of the Italian Bishops Conference commission for migration: "Unfortunately, I realize that we are losing any sense of courage, even of shame”, he was quoted as saying in il Giornale (August 21st, 2016). “I understand that there they are talking of dialogue and friendship among peoples, but covering a sacred symbol as la Madonna is an offense we do against all Christians and our symbols”. In other words, if you resort to covering the statue of Mary, “you are not witnessing to your faith, should there even be an imminent danger! La Madonna then is also approved by the Muslims, followed, venerated, really I do not understand”, the prelate opined.

But another senior prelate, the archbishop Luigi Negri of Ferrara-Comacchio and abbot of Pomposa, one of the most important Benedictine abbeys in Northern Italy dating as far back as the ninth century, does not share this sort of mantra on the alleged Marian devotion of Muslims, or at least the significant presence of the Virgin Mary in the Koran. This mantra was amply publicized on the occasion of the participation of Muslim dignitaries – in France and Italy, on July 31 and August 2, 2016, respectively – in the funeral masses for Father Jacques Hamel, the French priest who was stabbed to death in his church in Rouen by Islamist terrorists.

Since the difference with those who venerate her as Mother of God is huge, "we cannot accept, not even as a joke, for Mary to be described by only referring to her historical or historicist dimension”, the Archbishop was quoted as saying in Libero (August 17th, 2016) at the end of his Mass in Ferrara cathedral on August 15, when he also made no mystery of his criticism of the above interfaith services. “We cannot accept to reduce the mystery of the Mother of the Lord to a secondary reality, which would bear no relation with the substance of the dogma of Christ. Those who diminish the importance of the mystery of the Virgin Mary’s divine maternity definitely attacks the substance of the faith”.

If this alleged veneration of average Muslims for the Virgin Mary can be a matter for discussion, Islam fundamentalists and terrorists are much more likely to actually hate the Virgin Mary, were it not for any other reason than that of the role she played in the military defeats endured by Muslim armies over the centuries. Suffice it just to remind them of the battle of Lepanto on October 8th, 1571, as surprisingly recalled in an editorial in a liberal-conservative national daily like il Giornale (August 21st, 2016) under the headline, “Oh Mary, save us!”. The pope at the time of Lepanto, St. Pius V, was convinced that the victory was the result of incessant prayers for Mary’s intercession and inserted that date in the Christian calendar by proclaiming it the feast of Our Lady of the Rosary.

All the more interesting, as noted by the late Brazilian Catholic leader and historian, professor Plinio Corrêa de Oliveira, in an article on the battle of Lepanto which appears here:

Catholic sources often do not mention a crucial fact, which is present in some Muslim sources. The latter say – and up to this point all Catholic sources agree – that there was a certain time when the situation of Catholics seemed desperate. There had been a terrible clash between the two armies on board ships, and in this stage of the battle, Catholics were in retreat and the situation seemed completely lost. But suddenly, when least expected, the Muslims began to back away, and when some of them were asked what was happening, they replied that a lady dressed as a queen had appeared in the sky, gazing at them with such a scary look that they lost all their courage and started to run away.

I wonder if she’ll still stand with us…now that we—rather than emblazoning her image on our masts—cover her up out of fear of our enemies. God help us all if we manage to alienate His Mother too.

This article appeared in the latest print edition of The Remnant. To see what else was in that issue, subscribe today!

[Comment Guidelines - Click to view]
The Remnant values the comments and input of our visitors. It’s no secret, however, that trolls exist, and trolls can do a lot of damage to a brand. Therefore, our comments are heavily monitored 24/7 by Remnant moderators around the country.  They have been instructed to remove demeaning, hostile, needlessly combative, racist, Christophobic comments, and streams not related to the storyline. Multiple comments from one person under a story are also discouraged. Capitalized sentences or comments will be removed (Internet shouting).
The Remnant comments sections are not designed for frequent personal blogging, on-going debates or theological or other disputes between commenters. Please understand that we pay our writers to defend The Remnant’s editorial positions. We thus acknowledge no moral obligation whatsoever to allow anyone and everyone to try to undermine our editorial policy and create a general nuisance on our website.  Therefore, Remnant moderators reserve the right to edit or remove comments, and comments do not necessarily represent the views of The Remnant.
back to top
Last modified on Monday, September 5, 2016
Tweet

More in this category: « And the Winner of The Remnant’s Photo Caption Contest is... Why Revolutionaries Always Crush Contemplative Nuns First »