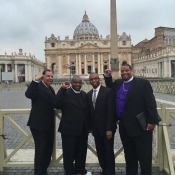 PICO Community Organizers On a Mission from Soros
Thanks to WikiLeaks, we learn that in preparation for the U.S. Papal September visit, the Vatican proactively sought input from the most radical fringe of the Democratic Left. Is this Pope Francis’ idea of his peaceful ‘dialogue and encounter?

All roads to the Francis Vatican lead back to George Soros.

The secret roadmap is provided by both the WikiLeaks’ release of John Podesta emails and DCLeaks documents from George Soros’ Open Society Foundation. These emails corroborate that Soros operatives are collaborating with top Vatican cardinals, at the behest of George Soros.

In August 2016, DCLeaks documents hacked from Soros’ Open Society, exposed the $650,000 Soros grant to PICO, a radical organization of community organizers for the express purpose to travel to the Vatican for strategy meetings in anticipation of the 2016 election.

What ever happened at the Soros-funded Vatican meeting?


Not surprisingly, the outcome of the PICO 3-day Vatican meeting suddenly materialized in the WikiLeaks emails of John Podesta inbox. A detailed report on the critical PICO/Vatican trip would certainly be of critical interest to the Chairman of the Clinton Presidential Campaign, underscoring the Soros/Clinton/Vatican partnership. (Full disclosure: Soros gave $25 million to the Clinton presidential campaign and Podesta previously chaired the Soros’ Center for American Progress). And, indeed, the meeting notes disclose valuable insight and intelligence about the leftist cabal at work in the Vatican.

WikiLeaks pulls back the curtain on the radicals entrenched in the Francis papacy. The PICO Vatican meeting was not simply a brisk cursory papal meet and greet. Rather, documents reveal that Alinsky activists were invited, welcomed, and dined in intense strategy sessions with high level Vatican cardinals. The leaked emails expose the leftist political machinations behind the Francis papacy, where the Soros-funded community organizers coordinated radical messaging with high level papal cardinal confidantes.

Why would Soros underwrite this Vatican trip? It is obviously a wise investment with long term benefits.

The Podesta email cache reinforces the ongoing collaboration of Soros globalists with Francis and his papal minions. From the moment of Bergoglio’s papal elevation, George Soros identified Bergoglio as a kindred spirit, a radical globalist, with the much sought after authority and moral voice of the Catholic Church. Pope Francis shares Soros’ world view: climate change, mass migration, income inequality, globalism, and capitalism bashing.

Within weeks of the new Francis papacy, Jeffrey Sachs—a longtime member of George Soros’ brain trust, also a recipient of $50 million of Soros funds, and top UN official—was invited to and featured as the Vatican’s premiere expert on the radical climate change agenda.

As indication of his favored status, Sachs spoke at the Vatican 18 times during the first years of Francis papacy. Sachs orchestrated the UN/Vatican alliance on climate change and assured the Pope Francis seal of approval on the UN Sustainable Development Goals and Paris Climate Treaty, inaugurating the globalist agenda. Several Soros confidantes and advisors, are firmly entrenched at the Vatican’s Pontifical Academy of Social Sciences promoting the UN/Soros environmental globalist agenda, and the anti-capitalist Occupy Wall Street protests.

The WikiLeaks Podesta emails reveal that the Vatican solicited advice from, and collaborated with leftist community organizers to advance the political platform of the Democratic party. Soros strategically funded PICO progressive activists who appear to serve as de facto advance men for the upcoming Pope’s U.S. trip, by discussing papal site visits and political messaging with key Vatican hierarchy.

With the daily cascade of WikiLeaks from John Podesta emails, the Vatican is further unmasked as a sympathizer of the American radical left. The Podesta emails expose the extremist collaborators in power and control in the Francis papacy. From 6/22/15 WikiLeaks-Recap to John Podesta about the Soros-Pico Vatican junket:

“Our team included several PICO African-American pastors deeply involved in Black Lives Matter (BLM)(Soros funds BLM $33 million in one year, ed.) including a Pastor from St. Louis who is on the Ferguson commission; Rev. Alvin Herring, our Deputy Director, who has worked closely with clergy in Baltimore; a DREAMer from Florida; a priest from California who was formerly undocumented himself; a Black Catholic Deacon who is leading our work on mass incarceration in New Orleans; and two workers from SEIU helping to lead the Fight for 15 workers”

Soros dispatched his social justice community PICO activists to the Vatican with orders to shape and frame the Pope’s message to Americans. Among the PICO activists in the Vatican delegation was Pastor Michael McBride, who was arrested in Ferguson protesting the phony trumped up mythical drumbeat of police brutality against the not so “gentle giant” Michael Brown. The discussion with the top officials at the Vatican over three days of meetings centered on the leftist agenda:

“We conveyed our view that the Pope is a World leader of historical significance; that his message of exclusion, alarm over rising inequality and concern about globalized indifference is important for the U.S. to hear and see animated during his visit; and that we intend to amplify his remarks so that we have a more profound moral dialogue about policy choices through the election cycle of 2016.”

Strikingly, the underlying purpose of the Vatican trip in the report to Clinton Campaign Chairman Podesta is that the delegation reinforced to Vatican officials the 2016 Democratic election talking points. PICO, on instructions from Soros, sought to bang the drumbeat of racial animus, discontent, inequality, and exclusion with the Vatican Curia and Francis speechwriters.

The email confirms that Pope Francis will underscore a strategy of similar themes and messages promulgated from PICO activists:

“[O]ur visit affirmed an overall strategy: Pope Francis, as a leader of global stature, will challenge the “idolatry of the marketplace” in the U.S. and offer a clarion call to change the policies that promote exclusion and indifference to those most marginalized.”

The PICO delegation provided stories of injustice and inequality to the Vatican curia. Imagine the race-baiting Ferguson protestors regaling Vatican officials with tales of rampant police brutality and the murder of Michael Brown and other innocent black men! Did the Francis Cardinals even bother to check the outcome of the trumped up Ferguson police brutality charges? Unlikely.

“In our meetings with relevant officials, we strongly recommended that the Pope emphasize – in words and deeds – the need to confront racism and racial hierarchy in the US. Conversations that were originally scheduled for thirty minutes stretched into two hour dialogues.”

Alleluia! Sounds like everyone was singing from the same Kumbaya racial discrimination hymnal. How ecumenical of the Vatican to dialogue with Black Lives Matter activists! Did the economic “idolatry of the marketplace” include the $33 million that George Soros provided to BLM protests? Doubt it.

As in our breakfast conversation with Cardinal Rodríguez, senior Vatican officials shared profound insights demonstrating an awareness of the moral, economic and political climate in America.”

Clearly, the Vice Pope (#2 at the Vatican) Cardinal Maradiaga Rodriguez promotes and shares the messaging from the community organizers of the American left. While providing input for the Pope’s upcoming U.S. visit, the Vatican and PICO delegation agreed that Pope Francis would visit a prison during his trip to the United States. Not surprisingly, during his stopover in Philadelphia, the Pope Francis visited a prison!

The Soros marching orders for the PICO delegation was to hatch, implement, and coordinate Pope Francis’ strategic themes and events during his U.S. visit in September 2015. The Vatican agreed to position the Pope’s message in alignment with the Soros funded Alinskyites’ radical agenda. As any political operative knows, race baiting ensures that the African-American voting bloc is energized to vote Democratic. WikiLeaks unmasks the Francis Church where community organizers are consulted as advance men for the U.S. papal visit providing Francis with speech themes from the radical left.

“This is why we gathered at the Vatican in mid-June, at the encouragement of Cardinal Oscar Andres Rodriguez Maradiaga, often referred to as the "Vice Pope" and a strong supporter of PICO, who had urged us to share our stories, our perspective, and our hopes for the impact of Pope Francis' visit to the United States, with Vatican officials.”

So, thanks to WikiLeaks, we learn that in preparation for the U.S. Papal September visit, the Vatican proactively seeks input from the most radical fringe of the Democratic Left, which fomented violence and anarchy in the streets over a faux police brutality charge and racial killing charge in Ferguson. Is this Pope Francis’ idea of his peaceful ‘dialogue and encounter? 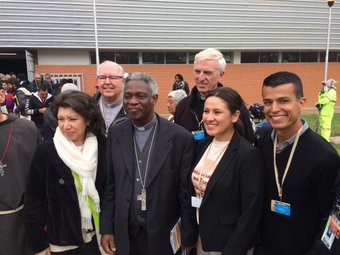 Cardinal Turkson with PICO delegation at World Movements in Bolivia

The Podesta email discussed that PICO and the Vatican would agree to keep dialoguing about social justice issues at the July 2015 World Meeting of Movements in Bolivia where Pope Francis would speak to global political activists. The PICO delegation received a personal invite from the Vatican to attend the World Meeting of Movements. PICO did attend the Bolivian meeting, along with their Vatican comrades, Cardinals Turkson and Maradiaga and Pope Francis.

The PICO Bolivia trip to the World Meeting of Movements even afforded the PICO delegation the opportunity to share the podium with the Pope, as Francis focused on the obtuse beatitude of “environmental dignity.” Social justi ce activists, like PICO, can quickly adapt and pivot from police brutality and racial inequality to echo Francis concerns about “the impact of climate change on thousands of families.”

While in Bolivia at the World Meeting of Movements, Pope Francis received a revolving gift from Bolivian President Evo Morales, the radical socialist activist. Morales gave the Pope a crucifix swathed with a blasphemous communist hammer and sickle. Catholics were scandalized and horrified over this profanation and politicization of the most precious symbol of Catholicism. Apparently, the Vatican took no offense at the gift because President Morales was invited to the Vatican to share the podium with another socialist, Bernie Sanders in April 2016.

Welcome to Francis Church where Jesuitical political action replaced the mundane and tedious teaching of the salvation of souls. The faded and threadbare Bernardin seamless garment of social justice is resurrected from mothballs by the troubling alliance of the Soros global network and the Francis Church. It’s time to guard your faith and your wallet.

Help The Remnant Fight the Enemies of the Catholic Church

[Comment Guidelines - Click to view]
The Remnant values the comments and input of our visitors. It’s no secret, however, that trolls exist, and trolls can do a lot of damage to a brand. Therefore, our comments are heavily monitored 24/7 by Remnant moderators around the country.  They have been instructed to remove demeaning, hostile, needlessly combative, racist, Christophobic comments, and streams not related to the storyline. Multiple comments from one person under a story are also discouraged. Capitalized sentences or comments will be removed (Internet shouting).
The Remnant comments sections are not designed for frequent personal blogging, on-going debates or theological or other disputes between commenters. Please understand that we pay our writers to defend The Remnant’s editorial positions. We thus acknowledge no moral obligation whatsoever to allow anyone and everyone to try to undermine our editorial policy and create a general nuisance on our website.  Therefore, Remnant moderators reserve the right to edit or remove comments, and comments do not necessarily represent the views of The Remnant.
back to top
Last modified on Friday, November 4, 2016
Tweet