The Film “Risen” and the Triumph of the Cross: A Movie Review 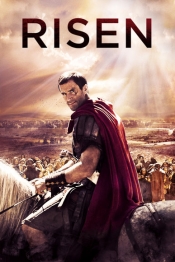 At the foot of the Cross even the Roman centurion recognized that here was No Ordinary Man, as the Gospel recounts.  "Ave Crux spes unica!" "Hail the Cross, our Only Hope!" the old Latin hymn goes.

In recent years there has been a proliferation of what some condescending film critics have termed "Christian cinema," in a barely concealed effort to cordon off and pigeonhole films that favorably portray Christianity into a barely acknowledged, often sneered-at sub-category. These critics are wont to label such movies as "propagandistic" and "overly didactic." And, while some of the films in this genre do have a tendency to hit the viewer over the head with excessive sentimentalism, certainly not all do.

One marvelous film I recently viewed remains etched in my mind; it would make a remarkable moment for a family gathered by the DVD player after Mass and Sunday dinner. The film is titled "Risen," and it came out last year. I managed to catch it on one of my satellite channels and was so moved by it, that I ended up purchasing a DVD copy (on Sony Pictures) that I found at Walmart!

For those of you who have seen the movie, you know the story.

Roman military Tribune Clavius is sent by Pontius Pilate to oversee the Crucifixion of Our Lord, and then, with rumors running rampant among believing Jews of Jesus' Resurrection, he is directed to follow up and find the disappeared "Body" of the supposedly dead Christ. Clavius's journey and gradual realization that here, indeed, was Someone Very Unique---possibly the very Son of God---forms the core of the film.

And what is notable is that, resisting the effort to "hit-you-in-the-face" with the Christian message, "Risen" eschews that approach. Rather, what we have is a progressive unfolding and understanding, with actor Joseph Fiennes (as Clavius) actually playing his role in an intriguingly understated manner. He is utterly believable---his initial skepticism and multiple doubts are illustrated, but never overblown. And the increasingly powerful evidence that inevitably mounts as he follows the Apostles and views and converses with the Risen Christ is mostly internalized, largely demonstrated by Clavius's pleading eyes and his body movement: the miraculous events he has seen have begun to change him.

Several of the miracles of Our Lord are portrayed with both realism and restraint, including the healing of the leper and the catching of the fishes on the Sea of Galilee. Clavius is there as a spectator as his doubts begin to subside. Towards the end, as the Christ prepares to leave His disciples, Clavius is left alone with Him, and Our Lord asks him what he seeks: “Certainty, peace, a day without death?” And Clavius, deeply moved, sinks to his knees and slowly nods his head. A kernel of Faith has been engendered in his soul.

one scene, Clavius overhears a conversation between Our Lord and St. Peter, the account reported in the Gospel of St. John 21: 17: “Simon do you love me?” Christ asks him. And Simon Peter replies: “yes, Lord, you know that I love you.” Then Our Lord embraces him and declares: “Feed my sheep.” As the film indicates, following Holy Scripture, it is Peter, Cephas the Rock, who is appointed by Christ to lead His flock.

In the final scene, Clavius is viewed at the hovel of a peasant. He has been wandering alone in the desert and offers his Tribune’s ring as payment for bread and wine. His host, hearing Clavius’s remarkable story, asks him, “Tribune, do you believe all of this?” And he responds: “I believe, I can never be the same.”

Clavius’ evidence is real and physical, and it has transformed him. But his journey, which indeed becomes a quest, would never end until he fully received the Faith, just as our journey of Grace never ends until we have completed our sojourn here below. Our evidence is unseen and based on a Faith that we have received through Baptism, a Faith that gave birth to Western Christian civilization, a Faith that has burned bright in the hearts and minds of Christians now for twenty centuries.

If you have not seen "Risen," my recommendation is that you do, and do so in family, or with a church group.  It is a marvelous cinematic experience.

Reflecting on the message of the film, as we look around us we observe that perhaps as never before the Christian Faith is under severe attack, not only from the exterior (e.g. Islamic expansionist terror, state-sponsored secularism), but also from within, from those who would doubt, dilute, subvert, and negate the orthodoxy and the beliefs that form the core of our faith.

Our Christian Faith offers forgiveness and promises peace and a “day without death,” just as Our Lord promised to Clavius....but at times, it also demands that the Church Militant defend its patrimony and defend the Faith against those who not only would kill the physical body, but also would, in effect, extinguish spiritual Faith. There can be no peace with the enemies of the Faith.

The unbreakable Faith of the disciples spread to the four corners of the world, and it was and is a Faith in the Risen Christ. Clavius made his spiritual journey and was privileged to believe because he saw the Christ in the flesh; we have Our Lord’s promises and can see His grace in our lives.

[Comment Guidelines - Click to view]
The Remnant values the comments and input of our visitors. It’s no secret, however, that trolls exist, and trolls can do a lot of damage to a brand. Therefore, our comments are heavily monitored 24/7 by Remnant moderators around the country.  They have been instructed to remove demeaning, hostile, needlessly combative, racist, Christophobic comments, and streams not related to the storyline. Multiple comments from one person under a story are also discouraged. Capitalized sentences or comments will be removed (Internet shouting).
The Remnant comments sections are not designed for frequent personal blogging, on-going debates or theological or other disputes between commenters. Please understand that we pay our writers to defend The Remnant’s editorial positions. We thus acknowledge no moral obligation whatsoever to allow anyone and everyone to try to undermine our editorial policy and create a general nuisance on our website.  Therefore, Remnant moderators reserve the right to edit or remove comments, and comments do not necessarily represent the views of The Remnant.
back to top
Last modified on Tuesday, May 2, 2017
Tweet

Boyd D. Cathey, a native North Carolinia, received an MA in history at the University of Virginia (as a Thomas Jefferson Fellow) and served as assistant to conservative author, Dr. Russell Kirk, in Mecosta, Michigan. Recipient of a Richard M. Weaver Fellowship, he completed his doctoral studies at the Catholic University of Navarra, Pamplona, Spain. Then, after additional studies in philosophy and theology, he taught in both Connecticut and in Argentina, before returning to the United States. He served as State Registrar of the North Carolina State Archives, retiring in 2011. He is the author of various articles and studies published in several different languages about political matters, religion, and culture and the arts.