Dr. Robert Gagnon and Fr. Martin, SJ
On August 31st, Dr. Robert A. J. Gagnon, formerly professor of New Testament at the Presbyterian Pittsburgh Theological Seminary, felt compelled to write an article defending Catholic moral teaching against Jesuit priest and Vatican communications consultant, Fr. James Martin, SJ.  Dr. Gagnon was defending the "Nashville Statement;" a series of beliefs and condemnations regarding human sexuality signed by many evangelical pastors which mirrors Catholic teaching on the subject almost word for word. The Nashville statement includes the belief “that it is sinful to approve of homosexual immorality or transgenderism and that such approval constitutes an essential departure from Christian faithfulness” (Article 10)."

This apparently was too much for the Vatican communications consultant, as he fired off a series of tweets which he then compiled into an article titled, "Seven simple ways to respond to the Nashville Statement on sexuality." His article was eagerly published by the Washington Compost. It is comprised of seven strawmen arguments in which Martin predictably caricatures the Nashville Statement (and therefore Catholic moral teaching on sexuality) as judging, insulting, and marginalizing.

In his defense of the Nashville Statement, Dr. Gagnon fires stinging critiques at Martin. Gagnon begins:

It is not surprising that Pope Francis’s communication adviser, Jesuit priest James Martin, has decided to attack the Nashville Statement, an evangelical declaration that affirms “that it is sinful to approve of homosexual immorality or transgenderism and that such approval constitutes an essential departure from Christian faithfulness” (Article 10). It is even less surprising that the hard-left Washington Post, a zealous propaganda outlet for the promotion of homosexualism and transgenderism, has published his tweets about it (“Seven simple ways to respond to the Nashville Statement on sexuality,” Aug. 30, 2017). What is surprising is that Fr. Martin still has his job as a Vatican communications consultant.

Martin’s tweets confirm the by-now widely held perception, reinforced repeatedly by Martin himself, that his raison d’etre involves undermining the Catholic Church’s upholding of Jesus’ teaching on a male-female foundation for sexual ethics, upon which Jesus’ teaching about the binary character of marriage (twoness) is based.

A consideration of Martin’s “seven ways” of responding to the Nashville Statement underscore the truncated gospel (or even anti-gospel) with which Martin operates....

Contrary to Martin’s repeated claims, the Nashville Statement does not deny God’s love for persons who gratify sinful same-sex desires or sinful denials of one’s birth sex. Rather, consistent with the witness of Jesus and Scripture generally, it manifests love by calling such persons away from intrinsically self-dishonoring and God-abhorring desires to an authentic self in keeping with their creation in God’s image.

Again contrary to Martin’s claims, Jesus’ statement about not judging (Matt 7:1) was never intended by Jesus to be a denial of all judgment, particularly since a third to a half of all of Jesus’ sayings are accompanied by some motif of warning about a coming judgment. Matthew 7 itself (the conclusion of the Sermon on the Mount) closes with a triplicate of warnings about cataclysmic judgment for those who merely hear, but don’t do, what Jesus says (7:13-27). It also contains a warning not to “cast your pearls before swine” (7:6), surely a judgment of some as “swine.” Martin himself makes judgments about those who signed off on the Nashville Statement, though he appears to be unaware of the inconsistency. Presumably even Martin holds the line on some moral standards (Incest? Polyamory? Abortion? Racism?), which means that he himself doesn’t construe Jesus’ “don’t judge” statement absolutely.

Like many who seek to promote homosexual unions and gender identity confusion, Martin wants to make the “don’t judge” statement a canon within the canon, falsely treating it as an absolute injunction while applying it selectively...

Yes, “all of us are in need of conversion” but Martin doesn’t want to convert people out of a homosexual or transgender life. He wants the Church to affirm the sin or at least to cease to take a stand against it...

The Nashville Statement does not claim that persons who engage in homosexual practice can never act in a holy manner. We all compartmentalize our lives. But the areas we are good in do not validate the areas we are bad in. From the standpoint of Jesus and the writers of Scripture, engaging in behavior abhorrent to God contests any claim to holiness.

The bottom line is this: Fr. Martin is using—or even abusing—his office to undermine what for Jesus was a foundational standard for sexual ethics. 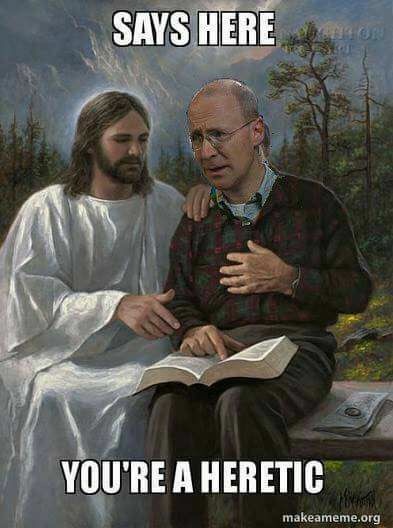 Boom. And thus we have reached the point in our Post-Conciliar Springtime where it takes a Presbyterian theologian to dismantle and eviscerate the candy corn cliches a Jesuit priest uses to cloak the sins of sodomy and transgenderism.  Even Dr. Gagnon can see these Catholic truths using only his natural reason and his bible. Yet Fr. Martin, with access to the Church's 2,000 year Tradition & teaching against these sins, in addition to the graces of the sacraments, just can't seem to figure it out. And for that, the man is promoted to be a Vatican communications consultant.

The only problem I have with Dr. Gagnon's critique is that he finds it surprising Martin still has his job. Poor Dr. Gagnon is probably under the illusion (shared by his Neo-Catholic friends) that the vast majority within the current Vatican beurocracy believe and teach the Catholic Faith. In reality, they agree with Fr. Martin which is how he got the job in the first place. It is precisely because Fr. Martin has his post at the Vatican that Catholic clergy, save those high up the food chain like Cardinal Sarah, feel uncomfortable destroying Martin's heretical arguments in public. Because somewhere deep down they know that Fr. Martin's views are not his alone, but are shared by the man who appointed him.

[Comment Guidelines - Click to view]
The Remnant values the comments and input of our visitors. It’s no secret, however, that trolls exist, and trolls can do a lot of damage to a brand. Therefore, our comments are heavily monitored 24/7 by Remnant moderators around the country.  They have been instructed to remove demeaning, hostile, needlessly combative, racist, Christophobic comments, and streams not related to the storyline. Multiple comments from one person under a story are also discouraged. Capitalized sentences or comments will be removed (Internet shouting).
The Remnant comments sections are not designed for frequent personal blogging, on-going debates or theological or other disputes between commenters. Please understand that we pay our writers to defend The Remnant’s editorial positions. We thus acknowledge no moral obligation whatsoever to allow anyone and everyone to try to undermine our editorial policy and create a general nuisance on our website.  Therefore, Remnant moderators reserve the right to edit or remove comments, and comments do not necessarily represent the views of The Remnant.
Last modified on Friday, September 1, 2017