Written by  Christopher A. Ferrara
Rate this item
(33 votes) 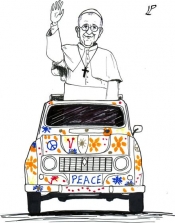 The Correctio, of which I am one of the original signatories, identifies “7 heretical positions about marriage, the moral life, and the reception of the sacraments” that have been spreading throughout the Church solely on the basis of the moral novelties of Amoris Laetitia (AL). Chief among these unheard-of propositions is that divorced and “remarried” people may receive absolution and Holy Communion without ceasing their adulterous sexual relations while they “discern” their moral obligation according to “the concrete complexity of one’s limits” (AL 303).  In short, situation ethics applied to the exceptionless Sixth Commandment in order to excuse sexual relations outside of marriage, which are intrinsically evil and never permissible under any circumstances. To quote John Paul in Veritatis splendor, whose teaching, in line with all of Tradition, is now being overthrown in practice in one diocese after another:

The negative precepts of the natural law are universally valid. They oblige each and every individual, always and in every circumstance. It is a matter of prohibitions which forbid a given action semper et pro semper, without exception, because the choice of this kind of behaviour is in no case compatible with the goodness of the will of the acting person, with his vocation to life with God and to communion with his neighbour. It is prohibited — to everyone and in every case — to violate these precepts. They oblige everyone, regardless of the cost, never to offend in anyone, beginning with oneself, the personal dignity common to all.

The Correctio further demonstrates beyond reasonable dispute that Francis, by means of written and oral statements in favor of this development, and by his refusal to answer queries and petitions regarding AL from the four cardinals and nearly a million members of the faithful, “has caused these heretical opinions to spread in the Catholic Church.”

The Pro Francis website features an open letter to Francis which makes it clear that the signatories are not interested in defending the Faith, the Church or even the papacy such, but simply and only Francis and his novelties, precisely because they radically break with the authentic Magisterium:

Your pastoral initiatives and their theological justification are currently under vehement attack by a group in the church. With this open letter, we wish to express our gratitude for your courageous and theologically sound papal leadership.

In a short time, you have succeeded in reshaping the pastoral culture of the Roman Catholic Church in accordance with its origin in Jesus. Wounded people and wounded nature go straight to your heart. You see the church as a field hospital on the margins of life. Your concern is every single person loved by God. When encountering others, compassion and not the law shall have the last word. God and God’s mercy characterize the pastoral culture that you expect from the church. You dream of a "church as mother and shepherdess." We share your dream.

We ask that you would not veer from the path you have taken, and we assure you of our full support and constant prayer.

That is, Francis alone seems ready to accomplish the mighty work of transforming the Catholic Church into a liberal Protestant sect that not even Luther dreamed of creating, and indeed would probably regard as a nightmarish libertine perversion of the Christian religion.

That these radical progressives for the Pope—meaning this Pope alone—are utter hypocrites who reject the very concept of a Roman Pontiff, whose authoritative pronouncements on faith and morals command assent, is the obvious point.  The less obvious point is that in demanding obedience to the “courageous and theologically sound papal leadership” of this Pope alone, they advance the same theological error as two other constituencies in the Church:  the sedevacantists and the neo-Catholics.

All three constituencies insist that a Pope cannot commit an error pertaining to faith and morals within the four corners of any papal document he might choose to promulgate. That contention dispenses with the strict limits of papal infallibility and the vital distinction between the authentic Magisterium of bimillenial standing on the one hand and, on the other, the teachings of a particular Pope, who is certainly capable of error and thus a departure from the authentic Magisterium when he is not speaking ex cathedra.  History has shown this more than once, and Francis is already the foremost historical example of this papal capacity for error outside the ambit of formal dogmatic definitions.

Each of the three constituencies stakes out this indefensible claim for a different motive, however:

The progressives demand obedience to Francis because he is the one Pope they have been waiting for, whereas the teaching of other Popes they take or leave according to their fancy.

The sedevacantists need an inerrant and irresistible Pope so that they can maintain that the conciliar Popes, having erred in some pronouncement or decision, cannot be Popes. The sedevacantists delight in arguing that traditionalists must either obey the conciliar Popes unquestioningly in everything they declare or else reject them as total imposters, there being no via media by which one can “recognize but resist” a wayward Roman Pontiff in a particular case. They argue for an absurd and ahistorical caricature of the papacy, which makes of it an absolute dictatorship.

The neo-Catholics cannot admit that they have failed to recognize the ecclesial crisis for what it is—a catastrophic break with Tradition approved or tolerated by the conciliar Popes—so they contrive to impose a tortured “orthodox reading” of innumerable dubious papal utterances or actions, including the disastrous novelties of Amoris Laetitia, in order to deny that there is any such crisis.

We can count on all three constituencies to act as one in denouncing any criticism of the ever-multiplying Bergoglian novelties, no matter what they are (including women deacons, married priests, intercommunion with Protestants, and a “revision” of Humanae Vitae, all of which are reportedly in the planning stage). The result likely will be—indeed, it has already begun—a brutal internal persecution of the defenders of Tradition not unlike that endured by the followers of Saint Athanasius during the Arian crisis.

Prepare for the worst. But hope for the best: if not the Church’s deliverance from the clutches of Francis and his collaborators, then, after him, when all seems lost, a most dramatic end to the entire ecclesial crisis.  The ecclesial restoration is inevitable, for the Holy Ghost will have it so, even if we may not live to see it.

[Comment Guidelines - Click to view]
The Remnant values the comments and input of our visitors. It’s no secret, however, that trolls exist, and trolls can do a lot of damage to a brand. Therefore, our comments are heavily monitored 24/7 by Remnant moderators around the country.  They have been instructed to remove demeaning, hostile, needlessly combative, racist, Christophobic comments, and streams not related to the storyline. Multiple comments from one person under a story are also discouraged. Capitalized sentences or comments will be removed (Internet shouting).
The Remnant comments sections are not designed for frequent personal blogging, on-going debates or theological or other disputes between commenters. Please understand that we pay our writers to defend The Remnant’s editorial positions. We thus acknowledge no moral obligation whatsoever to allow anyone and everyone to try to undermine our editorial policy and create a general nuisance on our website.  Therefore, Remnant moderators reserve the right to edit or remove comments, and comments do not necessarily represent the views of The Remnant.
back to top
Last modified on Saturday, October 21, 2017
Tweet

More in this category: « Discovering the Real Christopher Columbus A Spark from Poland »