“Lectio Magistralis” of Cardinal Burke: Focused on the Importance of Liturgy 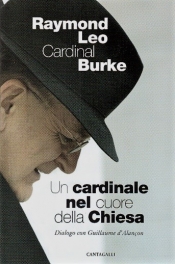 The recent “lectio magistralis” given by Cardinal Raymond Burke in L’Aquila on March 24th, 2018, proved an extraordinary opportunity to deepen the Catholic doctrine on fundamental issues, with special reference to the Sacred Liturgy as the highest expression of Christian life. Starting from and based on his personal experience, the Cardinal's lecture touched also on various other topics of particular relevance in today's ecclesial and social life: clergy formation, secularization and ethical relativism, family, bioethics and youth education.

His lecture, amply based on his recent book “Un cardinale nel cuore della Chiesa” (A Cardinal in the Heart of the Church), was organized by the local chapter of the Sacred Military Constantinian Order of Saint George for Abruzzo and Molise, and the Giuseppe Sciacca Foundation in the person of its president professor Don Bruno Lima (Cardinal Burke is also its honorary president) in conjunction with the “Missa Est” association, a local group for the celebration of the traditional Latin liturgy. Missa Est is a member of CNSP (Coordinamento Nazionale del Summorum Pontificum, National Coordination of Summorum Pontificum), a free federation at Italian lay and religious associations that in their areas are involved in various ways in the application of the motu proprio Summorum Pontificum of Benedict XVI and the related interpretative note Universae Ecclesiae of 2011. In turn, CNSP is part of CISP - Coetus Internationalis Summorum Pontificu, the international organization which oversees the annual thanksgiving international pilgrimage to Rome to celebrate the Motu Proprio of Pope emeritus Benedict XVI, who with this 2007 apostolic letter intended to liberalize the celebration of the traditional pre-Vatican II Roman rite of the mass. 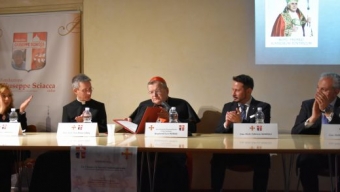 The conference took place in the Sala Rivera of Palazzo Fibbioni, one of the most stately palaces in L’Aquila, currently housing also the City Hall offices, in the presence of a packed audience with a number of representatives of local civil, military and religious authorities, including the head of L’Aquila archdiocese, Archbishop Giuseppe Petrocchi.

As explained by Don Bruno Lima in his introduction, the event was essentially motivated by the intention to present also in L’Aquila the book authored by His Eminence, whose lecture is in fact largely based on its content. A content whose gist is that the renewal and reform of the sacred liturgy is brought about not through rupture with the past, not through revolution, but in continuity with the past, through respect for the sublime beauty of the Sacred Liturgy celebrated uninterruptedly along the Christian centuries.

In the senior prelate’s words, the texts of Vatican II were arbitrarily used by some ecclesiastics as a tool to start denting the immense spiritual heritage built up by the Church over almost two millennia. “It was above all the sacred liturgy to suffer the disastrous consequences of such an attitude that behind an apparent desire for good, it actually concealed reprehensible purposes”, the Cardinal observed. “Since then an ever more frequent practice of abuses of every kind was introduced”, which in vain the following supreme pontiffs sought to correct.

The liturgical question undoubtedly plays a central role in the context of the problems we are here dealing with, he went on, precisely because the sacred liturgy constitutes the highest and most perfect action that man is given to perform on earth, prefiguring that incessant adoration towards the supreme creator and omnipotent Lord that only in the blissful eternity is perfectly and unceasingly accomplished. “Through the sacred liturgy heaven truly meets the earth and the eternal liturgy of the marriage of the Lamb of God is brought forward”.

If sacred liturgy constitutes the highest and most perfect action for mankind to perform on earth, therefore the motu proprio Summorum Pontificum promulgated by Benedict XVI on July 7th 2007 allowed the re-appropriation of the great millennium's liturgical treasure of the Church, thus contributing to correctly address the interpretation and implementation of the sacred rites and comprehending its right significance.

“The full liturgical uniformity in the Latin Church occurred only with the missal of Saint Pius V”, the senior prelate stated. “It constitutes the point of arrival of a long journey begun with Jesus himself in the cenacle and on the Calvary. Through the apostles and their successors over centuries it has come to this day. The veneration of the text of the Roman missal and especially for the text of the Roman canon, for example, has been manifested since the beginning of the 19th century up to the time of Vatican II with a long debate on the possibility of adding the name of St. Joseph to the canon”. However strong the devotion to St. Joseph may have been, “no one, not even the Pope himself thought he could change the text of the Roman missal, and especially the Roman canon”.

There are no precise ritual norms on the Eucharistic celebration in Holy Scriptures, except the well-known provisions of Saint Paul in the first letter to the Corinthians. “Probably, as can be seen from the texts of Saint Leo, Saint Clement, San Justin and Pope Sixtus V, Jesus himself in the 40 days of permanence with the apostles after His resurrection and before His ascension must have given the fundamental norms of the liturgy”, which then the apostles spread as founders of some of the first particular Churches. “Already in the apostolic age it is interesting to note the clarity of the fundamental ritual norms as we learn from some witnesses of primary importance, first letter of Pope Saint Clement to the Corinthians, Saint Irenaeus of Lyons, who were disciples of an apostle or one of his immediate successor . These sources are to be considered as an integral part of tradition”, Cardinal Burke claimed.

The great Christian fathers and writers, Tertullian, Saint. Cyprian, Saint Jerome, Saint Basil the Great and Eusebius of Caesarea have often reminded the apostolic origin of various ceremonies and symbols of the Holy Mass, he pointed out, as for example the essential of the canon of the rite of communion.

“The apostles fixed the salient aspects of the rite, which then underwent various and major developments starting from the fourth century, from the Constantinian peace, 313 AD”, he said. “An important turning point is the Gregorian sacramentary which has essentially fixed the rite of Mass as it has been maintained. The liturgical uniformity that was reached with the reform of St. Pius V was a long journey begun very slowly in the time of St. Gregory VII who in his sacramentary points out that he had followed the criterion of always reconnecting with the apostolic usages and those of the holy fathers”.

At the end, he concluded his lecture with a note of hope, for “the Church to be ever more faithful to her identity as the bride of Christ, in her teaching, in her worship, in her prayer and devotion, and in her moral life”.

Check out Cardinal Burke's next US conference HERE.

[Comment Guidelines - Click to view]
The Remnant values the comments and input of our visitors. It’s no secret, however, that trolls exist, and trolls can do a lot of damage to a brand. Therefore, our comments are heavily monitored 24/7 by Remnant moderators around the country.  They have been instructed to remove demeaning, hostile, needlessly combative, racist, Christophobic comments, and streams not related to the storyline. Multiple comments from one person under a story are also discouraged. Capitalized sentences or comments will be removed (Internet shouting).
The Remnant comments sections are not designed for frequent personal blogging, on-going debates or theological or other disputes between commenters. Please understand that we pay our writers to defend The Remnant’s editorial positions. We thus acknowledge no moral obligation whatsoever to allow anyone and everyone to try to undermine our editorial policy and create a general nuisance on our website.  Therefore, Remnant moderators reserve the right to edit or remove comments, and comments do not necessarily represent the views of The Remnant.
Last modified on Sunday, April 8, 2018