Francis and the Third Secret of Fatima 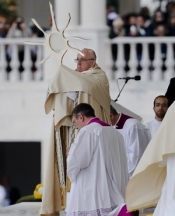 With events in the Church pointing more and more to the fulfilment of the Third Secret of Fatima, it is interesting to note that in Archbishop Vigano’s 11-page testimony of August 22 wherein the pope and 32 high-ranking Church officials were implicated in the sexual-abuse of minors, the archbishop cited the crux of the Third Secret, saying:

“The corruption has reached the very top of the Church's hierarchy”

This calls to mind the now famous statement of Cardinal Mario Ciappi, who read the Third Secret and who was personal papal theologian to Popes John XXIII, Paul VI, and John Paul II. In a personal communication to a professor Baumgartner of Salzburg, Ciappi said:

“In the Third Secret it is foretold, among other things,
that the great apostasy in the Church will begin at the top”

Among those who have read and commented on the Third Secret, we find this common thread in that it concerned the great apostasy of the last times and how the satanic infiltration of heresy would occur at the very highest levels of the Church and filter down to the man in the pew.

None less than the pope himself let out with a historic S.O.S. concerning this latter day apostasy when, on the occasion of the 60th Anniversary of Our Lady’s last apparition at Fatima, he said:

“The tail of the devil is functioning in the disintegration of the Catholic World. The darkness of Satan has entered and spread throughout the Catholic Church even to its summit. Apostasy, the loss of the faith, is spreading throughout the world and into the highest levels within the Church.” (Pope Paul VI, October 13, 1977)

What the pope was giving us was the gist of the Third Secret of Fatima, namely, that Satan would subvert the Church’s ruling body and then use this fallen hierarchy to precipitate the misguidance and destruction of the Church we are seeing today.

Note that it was exactly 60 years after Fatima that Pope Paul gave us what we can safely call the heart of the Third Secret—the long-awaited Secret that was supposed to be released by 1960, but never was. According to Sr. Lucy of Fatima, it was the expressed wish of the Blessed Virgin that the Secret be released by 1960.

Before his election to the papacy as Pius XII, Eugene Cardinal Pacelli in 1931 made a highly prophetic statement in response to the Fatima Third Secret.

“I am worried by the Blessed Virgin’s messages to Lucy of Fatima. This persistence of Mary about the dangers which menace the Church is a Divine warning against the suicide of altering the Faith, in Her liturgy…. I hear all around me innovators who wish to dismantle the Sacred Chapel, destroy the universal flame of the true Faith of the Church, reject Her ornaments and make Her feel remorse for Her historical past. A day will come when the civilized world will deny its God, when the Church will doubt as Peter doubted. She will be tempted to believe that man has become God.”

Hence, we can understand the significance of 1960 as the appointed year for disclosing the Third Secret, since it was only two years later that they would convene the Second Vatican Council, setting into motion this insidious departure from tradition that would leave the Holy City “half in ruins.” Our Lady was attempting to avert this disaster to the Church.

What we have seen since the Council is a new epoch of denial where the Church has lost confidence in Tradition while seeking ecumenical unity with man. This is what Cardinal Pacelli apparently meant when he said that the Church “will be tempted to believe that man has become God.”

More than once it has surfaced that the Third Secret of Fatima spoke of “a bad council and a bad Mass.” This was reported by the Fatima Crusader in May 2009 and again by One Peter Five in May 2016. According to both reports, it wasn't long after the supposed publication of the Third Secret by the Vatican in June 2000 that Cardinal Ratzinger [now Benedict XVI] told his good friend Fr. Ingo Dollinger—a long-time friend and spiritual child of St. Padre Pio—that there is still part of the Third Secret that they have not published.

“There is more than what we published,” Ratzinger said. He went on    to tell Fr. Dollinger that the unpublished part of the Third Secret speaks of “a bad council and a bad Mass” that was to come.  (One Peter Five, May 15, 2016)

Consider now the prediction of the nineteenth century Freemason Canon Roca, who said that “the liturgy of the Roman Church will shortly undergo a transformation at an ecumenical council … to deprive the Church of its supernatural character.” This certainly seems to gel with the prediction of “a bad council and a bad Mass.”

Among the instructions that accompanied this “bad council” was the September 26, 1964, Instruction on the Liturgy, Inter Oecumenici, which outlined the new ruling for the Mass and sanctuary.  Section 91 says:

The main altar should preferably be freestanding, to permit walking around it and celebration facing the people.

This unprecedented change was calculated to bring about a shift of focus where the emphasis is on the community. This was the essential part of “the suicide of altering the Faith in Her liturgy” that Cardinal Pacelli (later Pius XII) dreadfully prophesied after being presented with the Third Secret.

Unfortunately, many lash-out, arguing that the gates of hell can never harm the Church this way, but this argument holds no water. When Christ said that the gates of hell would never prevail against his Church he was tipping us off to the fact that the infernal gates would wage battle against his Church, but he assured us at the same time that         the enemy would never succeed in eliminating the Church altogether.

From the scriptures we know that most of the Church would fall into apostasy in the end, leaving only a remnant to meet with Christ at his Second Coming, but what we didn’t know until modern times was that the Church through the misdirection of a historic council would become the enemy stronghold wherewith to advance this apostasy.

Needless to say, the powers of darkness are waging their final battle against the Church as several popes and saints warned would happen. St. Paul himself tells us that “in the last days, shall come dangerous times.” (2 Timothy 3:1)... “For there shall be a time, when they will not endure sound doctrine.” (4:3)

The Church is truly in the grips of the worst crisis of its history, a crisis in which every member of the Church is being tried for his valor and strength. (Apoc. 3:10) It is a test to see if we will remain allegiant to the rule of tradition or flow with the new order of change that has ensued since the Council.

The Third Secret was about how the devil would succeed in sowing disobedience into the Church through obedience. The church today indeed is being guided by temptation under the illusion of divine guidance because the dark powers are using hierarchical rank to mislead the faithful into error, so great is the “diabolical disorientation” wrought by these “spirits of wickedness in the high places.” (Eph. 6:12)

The recent canonization of Pope Paul VI only adds to the disorientation, since Francis is simply using this as a political tool to try to “canonize” the post-conciliar “reform” which Catholics today erroneously attribute to Pope Paul VI. The canonization is also a skillful means of warding off conservative backlash in the face of the pope’s move earlier this year to reexamine Humane Vitae. The pope in 2016 had even contradicted Pope Paul’s condemnation of artificial contraception, saying that “avoiding pregnancy [via contraception] is not an absolute evil.”

Barque on the Verge of Capsizing

It was for good reason that His Holiness Benedict XVI said on July 15, 2017 that the Church “is on the verge of capsizing.” His Eminence Cardinal Burke echoed a similar note last year when he said: “Perhaps we have arrived at the end times.” (Catholic Herald, Nov. 30, 2017)

Burke’s words are certainly warranted. Since 2013, the Vatican has repeatedly invited pro-abortion advocates to come and speak to the Church about their vision of a "depopulated" world and in June 2017 the Vatican committed the treason of conferring a pontifical honor on abortion activist Lilianne Ploumen.  (Lepanto Institute, Jan 12, 2018)

What are we to expect when Pope Francis has appointed a number of gay sympathizers to key positions in the Church and Vatican? Francis even told a practicing homosexual in May 2018 that he should accept his gay-orientation on the grounds that “God made you that way” (USA Today, May 21, 2018), so what else can we expect? “By their fruits you shall know them.” (Matt. 7:30)

One ray of hope is that under the guidance of the Holy Ghost, Pope Emeritus Benedict XVI could still disclose the Third Secret of Fatima before his death, since this would confirm to all that the post-conciliar "reform" wasn’t the work of God after all. This would vindicate restorationists and motivate the Church Militant to come forward with more vigor to fight these changes. Is this likely to happen? Alas, no; in my opinion it is rather unlikely.  But with God nothing is impossible. So why not pray for just such an eleventh-hour reprieve?

In the meantime, we follow St. Paul's remedy to withstand the “operation of error” of the last times:

Stand fast, and hold the traditions which you have learned, whether by word, or by our epistle. (2 Thess. 2:14)

[Comment Guidelines - Click to view]
The Remnant values the comments and input of our visitors. It’s no secret, however, that trolls exist, and trolls can do a lot of damage to a brand. Therefore, our comments are heavily monitored 24/7 by Remnant moderators around the country.  They have been instructed to remove demeaning, hostile, needlessly combative, racist, Christophobic comments, and streams not related to the storyline. Multiple comments from one person under a story are also discouraged. Capitalized sentences or comments will be removed (Internet shouting).
The Remnant comments sections are not designed for frequent personal blogging, on-going debates or theological or other disputes between commenters. Please understand that we pay our writers to defend The Remnant’s editorial positions. We thus acknowledge no moral obligation whatsoever to allow anyone and everyone to try to undermine our editorial policy and create a general nuisance on our website.  Therefore, Remnant moderators reserve the right to edit or remove comments, and comments do not necessarily represent the views of The Remnant.
back to top
Last modified on Wednesday, October 17, 2018
Tweet

More in this category: « Good Pope Paul Went Out One Night Has Pope Francis Lost His Office for Heresy? »