The Vatican: They’re Doing This On Purpose 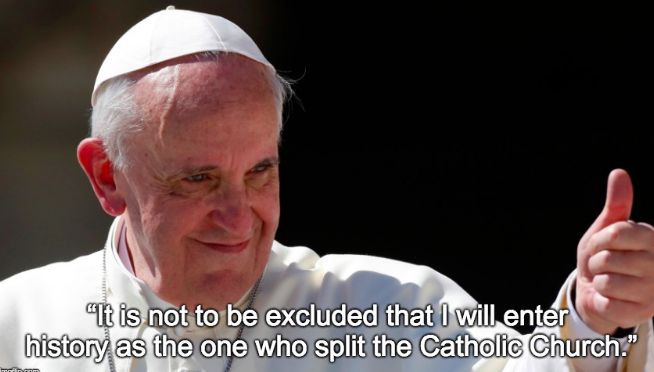 That quote [pictured] is from Der Speigel. But it is Spiegel’s Correspondent in Italy, Walter Mayr, who characterizes that statement as self-critical. Based upon all the evidence to date and what I think may be coming, I suspect that is a misreading of the statement.  The Pope wasn’t being self-critical, he was telling you the plan.

Our friend Pat Archbold has been producing a series of articles explaining in detail how the Bergoglian Purge is being carried out and what is coming next. He has given me a clearer understanding why we are going to have to walk away. Return to prayer - in fact to learn a deeper kind of prayer than we have ever known.

It's certainly not a time to be turning to the structures and institutions of the Church to protect and aid us.

I don't often say this about other people's writing, but these are a must-read. Read them here, here, here and here

"...Even I didn't expect the absolutely brazen way they have gamed the synod system.  At this last synod, not only did they do away with all the rules in advance and pack the synod with the pliant, but they actually published a synod document that was substantially about a topic that wasn't even discussed at the synod, synodality itself.  You must hand it to these folks, they are the honey badgers of heretics, they just don't care."

In Part II, Pat writes about what he means when he says "no quarter will be given".

"When they want you gone, they can make you gone.  They aren't even going through the motions any more and any and all sense of due process or rights under canon law have been dispensed with."

Part III, on the torpedoing of traditional or even merely "conservative" female contemplative religious:

Step by step they have been destroying avenues for religious to practice traditional Catholicism. They are simply not giving traditional Catholics with a vocation anywhere to go, except where they want you to go. They are diligently and systematically cutting off all avenues of escape. This is critical in understanding my thesis about how they may in the future cause the split in the Church for which Pope Francis has openly pined.

Today I had a conversation with a lady who is involved in a Thing to set up some kind of praying sort of community-ish thing for ladies and others. She was asking me whether I had ever heard of a bishop anywhere in the world who would be approachable, someone who is on the side of the Angels and understands what's at stake, to ask for support and/or protection. Maybe even start a process to become a Private Association of the Faithful, canonically speaking.

It was difficult to restrain the urge to answer, "Don't you know there's a war on? The bishops are the guys on the other side."

In real life, I said:

"It's not impossible. But it's imperative to understand that the bad men are in charge and there is a bloodbath planned for ALL faithful Catholics. They're purging EVERYONE. If you find a bishop who's going to support you, he'll be purged, likely for having supported you.

Nice Lady: Elaborate please on bloodbath and purge. What is plan for laity?

Me: Lock-out. Anyone associated in a formal way with the institutions of the Church - bishops, priests, deacons, monks, nuns, even "private associations of the faithful" ... everyone - will be either forced to toe the line or be purged. Anyone free of formal association will be locked out.

Me: Right now. The message of the Vatican to the USCCB at Baltimore was essentially that. 'Do it our way, go in our direction, or we'll crush you.'

Bishops and priests are already being removed who are obviously not going to go along, and not just in the US."

The goal is to ensure that Catholicism of the kind St. Philip Neri recognised will become a private practice. The public Church will no longer be Catholic doctrinally, in the same way it is largely no longer Catholic liturgically. You can have your New Catholicism any colour you like, so long as its Bergoglian.

Catch Hilary's regular column in the Print Edition of The Remnant Newspaper--Subscribe Today! 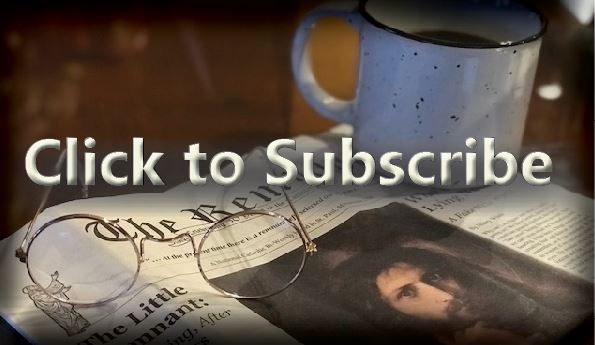 They're herding anyone who is locked into the institution over the cliff. And the cliff is the New Paradigm, in which the requirement will be the effective renunciation of Christ and His Holy Church. Going along with the New Paradigm requires abandoning the Catholic Faith, the very concept that there are absolute moral realities given to us by God. This is what Amoris Laetitia was about. And that is precisely what is being presented as the choice to seminarians and priests in the various places where the Purge is set to start: Malta, Buenos Aires, Mexico... etc. Go along or get out has been the message, approved in so many words by Rome, from the bishops there to anyone objecting.

This is what they're doing with that document - the first but not the last - presenting us with a choice, 'You will go over the cliff or be purged out of the institution."

Don't forget, Cupich has laid down the pattern already. All the way back in 2002, as bishop of Rapid City, he locked traditionalist parishioners out of their church on Good Friday. They were invited to attend the Triduum at a NO parish, or stay home. Their choice.

They're using our desire to follow the rules and be good and lawful to effect the purge.

Those nuns in France thought there were still rules, that the Church was still governed by the rule of law. They thought there were proper procedures, that they were protected by canon law. So they followed the rules, played along. They accepted the exile of their superiors, answered the questions of the vistitators, launched legal appeals. So did the FFIs. So did the ones attempting to create traddie Trappists in Germany. All crushed.

Maybe something worth asking about those nuns who are right now squeeing with girlish glee and running to be the first ones to get a glass of Kool Aid: "If you're fine, if you're safe and cozy and awaiting dewy-eyed with anticipation, the next missive from Rodriguez Carballo, and the other criminals in Rome… if the Bergoglian Vatican isn't coming at you with their weaponised visitators...

This is the point that Pat is making in his series: there are no rules now. The procedures don't matter. Canon Law doesn't matter. Certainly the moral law hasn't mattered for quite a while. As Fr. Rosica so memorably put it, we're in the hands of a man who cares about nothing but his own will and the power to have it obeyed.

“Our Church has indeed entered a new phase,” writes Rosica. “With the advent of this first Jesuit pope, it is openly ruled by an individual rather than by the authority of Scripture alone or even its own dictates of tradition plus Scripture.”

Henry Sire, author of the Dictator Pope, who has just been summarily thrown out of the Knights of Malta for telling the story of the Bergoglian coup, describes it pretty well to our friend John Zmirak:

JZ: I’ve read in news reports that because of this book, you’ve been expelled from the Order of Malta. Can you please share with us how the Order informed you of this? What justification did they give?

HS: I was first suspended in March 2018, pending a judicial procedure to decide upon my expulsion. Two weeks ago I received a letter from the Grand Chancellor with a decree of the Grand Master. It announced that the Order had decided to cut through the procedure, skipping the hearing before a tribunal to which it was supposed to lead, and to expel me by simple fiat. The decree also falsely states that my expulsion was voted for unanimously by the Sovereign Council. In fact it was not submitted to the Council’s decision at all. The justification given is, of course, that my criticism of Pope Francis is incompatible with my membership of the Order.

The change imposed on it by Pope Francis consists in his having forced the previous Grand Master, Fra Matthew Festing, to resign in January 2017. That was after he had tried to dismiss the Grand Chancellor Baron Boeselager. Why? For his responsibility in the Order’s distributing condoms in the Far East as part of its charitable work. Boeselager was reinstated on the Vatican’s insistence. He is now in absolute control of the Order. Thus, the superior who tried to uphold Catholic moral teaching has been punished by Pope Francis. The man who violated it has been rewarded.

I will of course appeal. Before the decree arrived, I was in the middle of conducting a very effective defense, with the help of my lawyers. It was based on the glaring irregularities committed by the Order in initiating my prosecution. The decree of expulsion is fully of a piece with that irregularity. So are the lies which have been used to justify it. It is important to expose the lawless domination that Grand Chancellor Boeselager is exercising over the Order.

This is how the lawless honey badger heretics roll. And why it's important to just turn away from the institution for the time being. As a priest put it to me recently: We must "concentrate on trying to bring into existence centres of intense prayer in full orthodoxy liturgical spiritual and doctrinal," to "not even to try" to involve the structures of the Church and at all costs "avoid interference from the hierarchy."

[Comment Guidelines - Click to view]
The Remnant values the comments and input of our visitors. It’s no secret, however, that trolls exist, and trolls can do a lot of damage to a brand. Therefore, our comments are heavily monitored 24/7 by Remnant moderators around the country.  They have been instructed to remove demeaning, hostile, needlessly combative, racist, Christophobic comments, and streams not related to the storyline. Multiple comments from one person under a story are also discouraged. Capitalized sentences or comments will be removed (Internet shouting).
The Remnant comments sections are not designed for frequent personal blogging, on-going debates or theological or other disputes between commenters. Please understand that we pay our writers to defend The Remnant’s editorial positions. We thus acknowledge no moral obligation whatsoever to allow anyone and everyone to try to undermine our editorial policy and create a general nuisance on our website.  Therefore, Remnant moderators reserve the right to edit or remove comments, and comments do not necessarily represent the views of The Remnant.
back to top
Last modified on Saturday, December 1, 2018
Tweet

More in this category: « The St. Andrew Novena and other Family Advent Traditions Quid est veritas? »