WANTED: A Hermeneutic of Continuity Between God and Cardinal Dolan

Written by  The Remnant Guy
Rate this item
(16 votes) 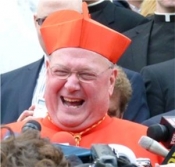 "So, were the prelate, or any other lord having subjects, on seeing one putrefying from the corruption of mortal sin, to apply to him the ointment of soft words of encouragement alone, without reproof, he would never cure him, but the putrefaction would rather spread to the other members, who, with him, form one body under the same pastor.” …God Our Heavenly Father, as recorded in the Dialogue of St. Catherine of Siena

"Good for him. I would have no sense of judgment on him.” …Cardinal Timothy Dolan on NBC’s “Meet the Press” when asked about football star Michael Sam coming out as homosexual.

“But if he were a physician, good and true to those souls, as were those glorious pastors of old, he would not give salving ointment without the fire of reproof. And, were the member still to remain obstinate in his evil doing, he would cut him off from the congregation in order that he corrupt not the other members with the putrefaction of mortal sin” …God Our Heavenly Father, as recorded in the Dialogue of St. Catherine of Siena

“But they act not so today, but, in cases of evil doing, they even pretend not to see. And do you know why? The root of self-love is alive in them, wherefore they bear perverted and servile fear. Because they fear to lose their position or their temporal goods, or their prelacy, they do not correct, but act like blind ones, in that they see not the real way by which their position is to be kept.” …God Our Heavenly Father, as recorded in the Dialogue of St. Catherine of Siena

“Look, the same Bible that tells us, that teaches us well about the virtues of chastity and the virtue of fidelity and marriage also tells us not to judge people.” …Cardinal Timothy Dolan of football star Michael Sam coming out as homosexual.

“If they would only see that it is by holy justice they would be able to maintain it; but they do not, because they are deprived of light. But, thinking to preserve their position with injustice, they do not reprove the faults of those under them; and they are deluded by their own sensitive self-love, or by their desire for lordship and prelacy, and they correct not the faults they should correct in others, because the same or greater ones are their own. They feel themselves comprehended in the guilt, and they therefore lose all ardor and security, and, fettered by servile fear, they make believe not to see. …God Our Heavenly Father, as recorded in the Dialogue of St. Catherine of Siena

“So I would say, 'Bravo.'”…Cardinal Timothy Dolan to football star Michael Sam, coming out as homosexual

“And, moreover, if they do see they do not correct, but allow themselves to be bound over with flattering words and with many presents, and they themselves find the excuse for the guilty ones not to be punished.” …God Our Heavenly Father, as recorded in the Dialogue of St. Catherine of Siena

"A gay person who is seeking God, who is of good will -- well, who am I to judge him? The Catechism of the Catholic Church explains this very well. It says one must not marginalize these persons, they must be integrated into society.”  Pope Francis, at a July 28, 2013 press conference on his flight from Rio to Rome -

How do we reconcile this novel approach to the thrid Spiritual Work of Mercy not only with the previous teachings of the Church, but also with what God himself said to St. Catherine?

Published in Fetzen Fliegen
back to top
Last modified on Saturday, March 22, 2014
Tweet
More in this category: « Can This Woman Tell Us What's Really Going On With Russia? USA Today's 'Most Powerful Catholic in America' »