Ludwig van Beethoven, “Wellington’s Victory,” and the Crisis of Our Time 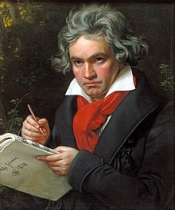 This past December 16, 2018, was a special anniversary, a significant one in the continuum of our Western Christian civilization, but one that went largely unnoticed or uncommemorated by the vast majority of our fellow citizens….but should not be forgotten.

On that date, 248 years ago in 1770, the great musician and composer Ludwig van Beethoven was born in the city of Cologne (Koln) in the Rhineland in what is now the Federal Republic of Germany, then part of the Holy Roman Empire. Traveling to Vienna as a young man, he spent much of his life there as one of the greatest composers of music of all time. His compositions and his persona continue to resound through the ages—as long as there is a Western and Christian culture to admire and celebrate.

Biographies of Beethoven abound, and I will not spend time recounting facts and events that are easily obtainable via the Internet or in hundreds of books written about him.

What I wish to do is simply emphasize the importance of cultural giants like Beethoven who have made precious contributions to our Western Christian heritage, a heritage that is critically threatened in our time by demonic and Gnostic demiurges who seek nothing less than the complete perversion of two millennia of Christian culture which brought together the salvific Gift of the Hebrews, the philosophy of ancient Greece, and the classical traditions of Rome.

Beethoven was an integral part of that continuum. And like so many others who have contributed to our inherited corpus of art, music, architecture, literature, and folklore, he stands above the ages athwart the disintegration and the frenzied assaults on what the poet William Butler Yeats called (in his poem, “The Second Coming”) the “rocking cradle” of Bethlehem—that “rocking cradle” of the Christ from which our culture proceeds.

Just as the post-Marxist and Progressivist academics and mobs and their allies in our cowardly political and media elites wish to put all reminders of our past—those monuments and symbols—whether Confederate or colonial, in remote museums, safely away from the inquiring eyes of most of our citizens, so, too, those epigones of Evil, those cultural vandals who would destroy our inheritance, wish to lock up our sacred traditions of music, literature, and the arts away from our population for whom that inheritance is a birthright. Or, separate them and make them practically inaccessible. Or, far worse, “re-interpret” them using new templates based entirely on “race” and “gender”—thus, “women’s studies” which views literature and music through the lens of “masculine oppression” and “toxic masculinity” throughout the ages.

In December 1940, at the end of a live national Saturday matinee broadcast of the Metropolitan Opera’s production of Gaetano Donizetti’s La Fille du Regiment, as author Paul Jackson (in his volume, Saturday Afternoons at the Old Met) recounts, the famous soprano Lily Pons advanced to the front of the stage, and holding a French flag aloft, sang “La Marseillaise.” The audience erupted in emotional enthusiasm…not just there in New York, but across the entire nation where as many as forty million listeners tuned in and heard her salute to a defeated France.  Forty million Americans in every state and territory (out of around 130 million citizens) were united not only in remembering fallen France, but by and in a culture and musical tradition they all shared, and, even if not devotees of opera, which they at least understood to be part of their precious cultural patrimony.

Today that unity no longer exists. It has been rent asunder by the very guardians of that cultural inheritance, those entrusted with its care and transmission, who have succumbed to the Dark Lord and the enticements that emit from the foulest voices and most fetid enemies of our civilization.

It was the Roman poet Juvenal two millennia ago in his Satires who wrote, “Quis custodiet ipsos custodes?,” which translated means: “Who is guarding us against the guardians?”

In recent months millions of Frenchmen have demonstrated against the pro-European Union statist and anti-Christian government of Emmanuel Macron, who was supposed to be the “new leader” of a united Europe (replacing perhaps the discredited Angela Merkel). Indeed, did we not hear those vaunted Fox All-Stars, the cream of Neoconservative “opinion,” Jonah Goldberg and Marc Thiessen, endorse Macron when he was challenged by Marine Le Pen in the past French national election? Le Pen, you see, was a “Make France Great Again” type person—too much like Trump—too much a “populist,” or to use Goldberg’s hackneyed catch-all epithet for anyone who opposes his globalist lunacy, just maybe a “fascist?”

These Neoconservatives are nothing more than a wing of the same Army of the Night that seeks to undo our civilization. Just consider how they—from Goldberg, the late Charles Krauthammer, Bill Kristol, to so many others—have “evolved” on such issues as feminism, racism, same sex marriage, and transgenderism, not to mention their own frenzied secular designs to impose a universal egalitarianism on the rest of the world, whether those other peoples desire it or not: a New World Order, without God and His Church, without Grace, and without, most assuredly, Hope.

After an initial enthusiasm for and flirtation with what he thought Napoleon might bring to Europe, Beethoven later in his life became a strong supporter of the Habsburg monarchy…and an avowed foe of the Napoleonic destruction of the Old Order. He understood what that meant, just as the Blessed Pius IX after the Revolution of 1848 understood the deleterious effects of liberalism and its fanatical desire to destroy Christian civilization.

In 1813 to celebrate the great victory of the Marquess (later Duke) of Wellington over the armies of Napoleon at the Battle of Vitoria in Spain (June 21, 1813), Beethoven composed a wonderful little ceremonial piece—“Wellington’s Victory”—a kind of short visually evocative symphonic poem depicting that momentous battle that freed Spain from Napoleonic tyranny. In it he interpolated both French and British airs and songs, including a rousing version of “Rule, Britannia!” (The Brits were on the “good” side back then.) It stands as a musical symbol of both the cultural response that Christian Europe then offered to “the great thief of Europe” as well as a paean to military triumph over the forces of Revolution.

Today both Europe and the United States appear prostrate before the even more frenzied offspring of those 19th century revolutionaries who largely dominate our politics and educational system, who have despoiled our artistic heritage, and who have infiltrated and occupied the highest offices in the Church.

For us, then, my wish is that in 2019 we seize upon the signs of Hope—those growing signs of contradiction against Modernism and Progressivism—and, like our ancestors, like Wellington and, yes, like a Beethoven with the scales removed from his eyes, raise up the banners of Christ the King.

While advancing once more beneath His Cross, we intone the Laudes Regiae: “Christus vincit! Christus regnat! Christus imperat!” And we could not do much better than letting “Wellington’s Victory” become our symphonic clarion call of militant crusade against our powerful enemies who seek nothing less than the extinction of our culture, our faith and us.

[Comment Guidelines - Click to view]
The Remnant values the comments and input of our visitors. It’s no secret, however, that trolls exist, and trolls can do a lot of damage to a brand. Therefore, our comments are heavily monitored 24/7 by Remnant moderators around the country.  They have been instructed to remove demeaning, hostile, needlessly combative, racist, Christophobic comments, and streams not related to the storyline. Multiple comments from one person under a story are also discouraged. Capitalized sentences or comments will be removed (Internet shouting).
The Remnant comments sections are not designed for frequent personal blogging, on-going debates or theological or other disputes between commenters. Please understand that we pay our writers to defend The Remnant’s editorial positions. We thus acknowledge no moral obligation whatsoever to allow anyone and everyone to try to undermine our editorial policy and create a general nuisance on our website.  Therefore, Remnant moderators reserve the right to edit or remove comments, and comments do not necessarily represent the views of The Remnant.
back to top
Last modified on Sunday, March 31, 2019
Tweet

Boyd D. Cathey, a native North Carolinia, received an MA in history at the University of Virginia (as a Thomas Jefferson Fellow) and served as assistant to conservative author, Dr. Russell Kirk, in Mecosta, Michigan. Recipient of a Richard M. Weaver Fellowship, he completed his doctoral studies at the Catholic University of Navarra, Pamplona, Spain. Then, after additional studies in philosophy and theology, he taught in both Connecticut and in Argentina, before returning to the United States. He served as State Registrar of the North Carolina State Archives, retiring in 2011. He is the author of various articles and studies published in several different languages about political matters, religion, and culture and the arts.

More in this category: « The Fisherman's Ring and the Issue of Division DEMOCRATIC PHARAOHS: The Left's War on the Unborn »