Purification of Notre Dame by Fire 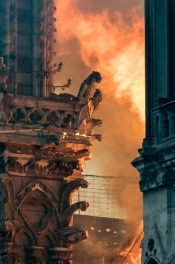 As Catholics celebrate Easter, I couldn’t help but regard the burning of Paris’ Notre Dame Cathedral—on the Monday of Holy Week, no less—as an ugly metaphor for the tribulations that our faith is suffering throughout the European continent and the whole of Western civilization.

We live in a nation where Christianity’s historic and longstanding influence continues to wither on the vine.  Much of it is a self-inflicted pruning of grand proportions that continues to be well-documented and very accommodating to the prevailing zeitgeist.

How does it affect a nation that is perhaps more divided politically, culturally and racially since the Vietnam War, or as some will argue, since the Civil War?  The figures are telling as the number of Americans who claim “no religion” has nearly tripled since 1991, running in a virtual dead-heat with Catholics and Evangelicals.

According to the recent General Social Survey, the “no religion” crowd is 23.1 percent of the population – an astonishing increase of 266 percent over the last thirty years.  Catholics are 23 percent and Evangelicals 22.5 percent.  Mainline Protestants have declined from nearly two-thirds of the nation back in 1982, to just 10.8 percent – juxtapose that with New York City that claims 9 percent of its 8.4 million residents as Muslim. 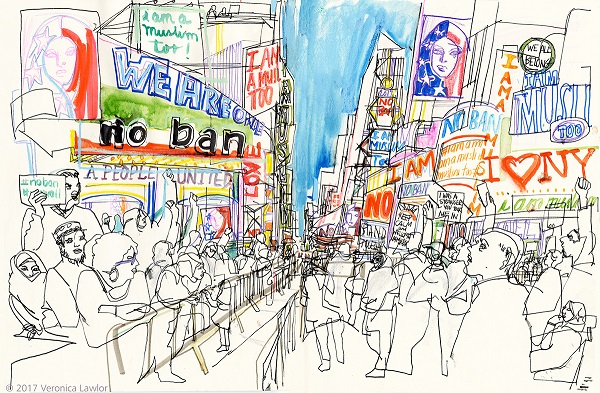 Many mainline Protestants have forsaken any modicum of orthodoxy they borrowed from Catholicism, while cultivating and then imbibing on the poisoned fruit of the Sexual Revolution that harvested the LGTBQ insurgency whose vines are helping to strangle what remains of Western Christianity.

These same mainliners made headlines recently by “blessing” a Planned Parenthood abortion mill in Ohio and followed up saying in a press release: “Many faith leaders and people of faith hold that accessing and providing abortions are good and godly decisions.”

If this doesn’t say it, then what does?

Society’s contemporary opinion on Christianity is straightforward: the more private, the better.  Such trivializing only breeds contempt and the eventual rejection of institutional faith that is certainly reflected in this most recent of polls.

Catholics may be the largest religious group only because of Hispanic immigration. But research says many of these immigrants – whether legal or illegal – will allow the prevailing secular culture to baptize and confirm them as they drift away from the faith after only one generation.

The tragedy lies in direct correlation with the abandonment of Western civilization’s Christian heritage, while embracing irreligious secularism that has one of its main anchors within the walls of the church itself.

When Catholic University of America has a problem with banning pornography on campus, while paying for contraceptives and abortifacients through their health care plan, the prevailing culture doesn’t want prisoners, just fatalities.

Many of those who attend weekly Mass are indifferent to abortion, contraception and gay marriage, and there are more of these types than anyone in the rectory or the episcopate wants to admit.  In actuality, they aren’t too far removed from those “cultural” Catholics who are planted everywhere else, but in the pews.  The same holds true for many of the quintessential doctrines of the church – in particular the Real Presence of the Eucharist, in which nearly two-thirds don’t believe.

From my experience, the conviction that exists among Evangelicals in their doctrines is much greater than among Catholics, resulting in a more authenticated witness and zeal.

Resulting Election Days confirm this time and again, most especially in last November’s Texas Senate race.  Evangelicals overwhelmingly supported conservative and anti-abortion Sen. Ted Cruz, while the majority of Catholics supported Beto O’Rourke, another politician in a long line of Catholic in name only Democrats, who is pro-choice, pro-gay marriage and an ardent cheerleader of the transgender movement.  O’Rourke, who ran a strong enough campaign for senator, believes he actually has a shot at the Democratic nomination for president.  Considering the leftward lean of the party, it’s no wonder he thinks in this regard.

To underscore even further, take the doleful and weak response of the Catholic hierarchy and laity to the infanticide legislation recently introduced in New York and Virginia.

John Adams, founding father and the nation’s second president said, “Our Constitution was made only for a moral and religious people.”

If Christianity throughout the United States and the rest of Western civilization is to be the viable and the exemplar way of life, it appears that Evangelicals will lead the way given that true, active and measured Catholic witness from the Rio Grande to Rome has – like the rooftop of Notre Dame de Paris – gone up in smoke.

It doesn’t have to be this way; in fact, it should never be this way.

If the Catholic Church is to remain true to its core mission as the Inerrant, Immaculate, Unblemished Bride of Christ – to draw souls out of this world in order that we may spend eternity with God in whose image we were made – there is much work to be accomplished by Catholics.

Perhaps missed in the plethora of coverage of the fire at Notre Dame de Paris is the fact that fire is an illustrious and recognized purifier.  Signs are inquisitive things; some bring denial, and even others contempt, but many reinforce something much greater – a stronger, more vitalized, embolden conviction.

Take the spire, which is a recently new addition to the 836-year old cathedral, crashing down upon another and even newer addition – the altar table installed after Vatican II – while the high altar stands majestically untouched as it once did throughout all of Christendom. 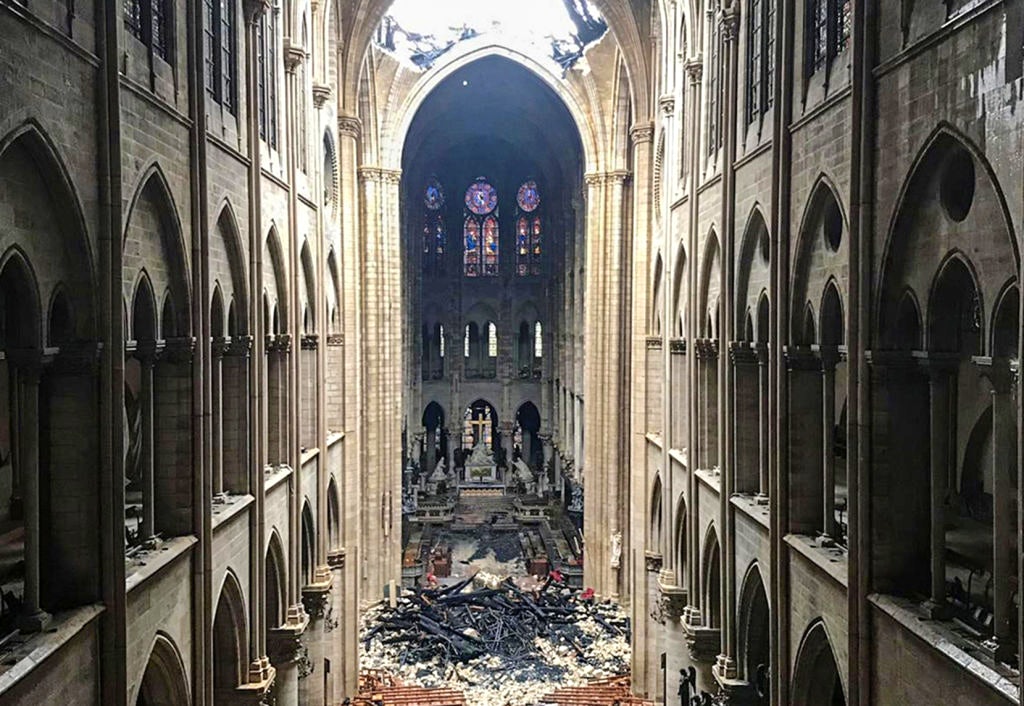 The people are the body of the Church, not the pope or clergy.  It is not the Catholic faith that needs purging; it is the people who are corrupting it.  Regrettably, many of the emissaries of the Church have either abandoned their mandate or never possessed supernatural faith to begin with and instead enlisted as willing ambassadors of this fallen world.

Where are the remaining orthodox clerics like Italian Archbishop Carlo Maria Viganò, who are up to the task to purge the disorientation reigning inside the Vatican?

The faithful will endure just so much autocratic incompetence.

What the clergy doesn’t do, the laity must.

The only paradigm shift the Church needs is a return to pre-Vatican II orthodoxy and tradition.

Consider how much stronger and more effective the challenge to Modernism would be if we simply placed differences aside and unified, prayed, and worked together for a restoration of our longstanding and august Catholic liturgy and tradition.

In this way once again, we can become truly the one, Catholic and Apostolic Church – the imposing, grand and majestic jewel and centerpiece of Western civilization.

[Comment Guidelines - Click to view]
The Remnant values the comments and input of our visitors. It’s no secret, however, that trolls exist, and trolls can do a lot of damage to a brand. Therefore, our comments are heavily monitored 24/7 by Remnant moderators around the country.  They have been instructed to remove demeaning, hostile, needlessly combative, racist, Christophobic comments, and streams not related to the storyline. Multiple comments from one person under a story are also discouraged. Capitalized sentences or comments will be removed (Internet shouting).
The Remnant comments sections are not designed for frequent personal blogging, on-going debates or theological or other disputes between commenters. Please understand that we pay our writers to defend The Remnant’s editorial positions. We thus acknowledge no moral obligation whatsoever to allow anyone and everyone to try to undermine our editorial policy and create a general nuisance on our website.  Therefore, Remnant moderators reserve the right to edit or remove comments, and comments do not necessarily represent the views of The Remnant.
back to top
Last modified on Saturday, April 20, 2019
Tweet