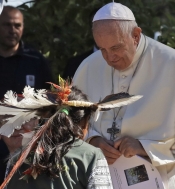 Let’s talk for a few minutes about the Bergoglians’ tactics and how we can easily bat aside the accusations we are already seeing leveled at objectors. Two days in and the screeches of “racist!” and similar nonsense are already being lobbed at people asking awkward questions and making awkward observations.

We are seeing this trope being deployed now especially by the New Paradigm’s Twitter apologists: “Object to those people bowing down to the ‘Pachamama’ statue? You hate the poor, you hate ‘brown people’ [yeah, and that’s not racist at all!]. You’re nothing but a right-wing, white cultural imperialist...” blah blah blah…

Clearing aside all this nonsense will help us see the reality much more clearly.

It’s not about the Amazon

The first thing to understand is that none of the things the people in charge are saying the Synod is about is in fact what the Synod is about. Just as the Synods on the Family weren’t about the family, the Synod on the Amazon isn’t about getting the Sacraments to “indigenous” people in remote places in South America. It’s not about climate change or poverty or the role of women or “viri probati” or any of it. It’s about using these tropes to cement the New Paradigm – indistinguishable from the globalist, ultra-statist agenda promoted by all the other international NGOs; the Soros agenda of a one-world government, with Catholicism transformed into a global, relativist, pantheistic pseudo-religion to serve it.

Let’s be clear: the Bergoglians and New Paradigmists do not care about the Sacraments or the people who aren’t receiving them. We can’t forget that it has been the likes of Hummes, Marx, Maradiaga and the whole crew who have pushed the antisacramentality of Amoris Laetitia. These are the same men who have been packing their seminaries with homosexuals and Liberation Theology and NeoModernist heretics, who have themselves done everything possible to reduce the numbers of priests.

They have spent their priestly lives undermining the Faith and working to replace it within the institutions of the Church and are the architects and implementers of the Bergoglian New Paradigm, in which it simply doesn’t matter who does or doesn’t receive the Blessed Sacrament, it doesn’t matter who is and isn’t Catholic. They have already shown that they are only too ready to use the Sacraments of the Church, including the priesthood and the Blessed Sacrament, as tools to advance an agenda having nothing to do with the Catholic Faith.

As the independent journalist George Neumayr said today, “So we are supposed to believe that bishops in whose dioceses confession is almost non-existent are worried about the Amazonians’ lack of access to one? Right.”

Nor do they care about “the Poor,” or the “indigenous peoples of the Amazon”. They use these tropes as leverage and PR because they know that real Christians do care about the poor and even about the environment. Your Catholic sensibilities are being used as rhetorical weapons against you.

These people are the Left’s rhetorical human shields.

Michael Matt is busy (poor guy’s still there) pointing out these contradictions and calling them on the game: “What’s with the feathers, Holy Father?”

“This agenda clearly has nothing to do with listening to anyone. It’s a game they’re playing…They’re not listening to the people of the Amazon. They’re exploiting them…

“They’re using the people of the Amazon to make the propaganda that anyone who does not go along with this whole United Nations, globalist, George Soros agenda is actually a racist who doesn’t even care about the poor little indigenous people of the Amazon.”

In fact, as Mike says, some of the journalists are starting to clue in. It’s becoming clear even to the secular press that the whole point of the exercise is “dressing up the native people and using them to advance a political agenda.”

And, as Mike also points out, apart from the few being paraded around in feathers and grass skirts for the cameras, there aren’t any Amazonians actually attending the Synod itself. Or, as Neumayr, put it, “With all the talk of ‘listening’ to Amazonian Indians, I would have expected to see some in Rome. I haven’t seen any. But I have seen plenty of German priests hanging out at Roman cafes and bloviating about them.”

“Rhetorical human shields” means that they are being used in a way similar to fad of the climate change alarmists of holding children’s rallies. Just as you don’t dare criticise Greta Thunberg and the only allowable response to child-crusaders is weepy applause, so we are not allowed even to ask questions about the Synod on the Amazon, because “brown people!”

It’s the oldest trick in the Communist Party playbook.

Precisely the same tactic of yelling “racist” or “fascist” has been used by Marxists and affiliated cultists since the early 20th century. Bolshevists would set up urban soup kitchens and various programmes for the poor and working class, but it wasn’t out of care for these people. It was to deflect criticism – “How dare you! You’re just punching down…” – to shut up opposition and to provide training and recruits for Marxist doctrine.

(And, let’s not forget, also to replace the Church’s charitable missions to the poor. Aping Catholicism is what the Left has always done.)

Fastforward to Bergoglian Rome in 2019 and we have simply substituted “indigenous peoples of the Amazon” for the “proletariat” and “working classes”.

So venerable and obvious is this method of shutting up opposition, it’s surprising it still works.

It was described quite clearly by G. Edward Griffin of The John Birch Society in this lecture all the way back in 1969.

And it has been countered quite neatly by US attorney Mike Godwin who said, “As an online discussion grows longer, the probability of a comparison involving Nazis or Hitler approaches 1.” Or, as the short form puts it: “Whoever yells ‘racist’ first, loses the argument.” So common is this tactic at this stage in history that it’s pretty safe to counter an accusation of “racist” with, “Thank you for conceding the argument.”

Let’s all make sure that we are really talking about what we’re talking about. Hold their feet to the fire, and don’t let them distract you or put you on the defensive. You’re not the racist: they are.

More in this category: « Violating the First Commandment - Synodal style ST JOHN HENRY NEWMAN: Pray for Our Church in Crisis »