No Creed? No surprises in NuChurch! 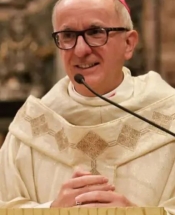 Another item for our endlessly expanding “It’s not the same religion” file has popped up in the internet feeds this week. Catholic websites and blogs, commenters on Twitter and Facebook are howling over the outrage and “shock” of an Italian bishop who announced he would be omitting the Nicene (or any) Creed at Mass for the Feast of the Epiphany. LifeSiteNews’s ever-alert Diane Montagna reports the bishop said quite specifically that he was doing so in order to “avoid offending” any non-Catholics who may be present.

About this the only thing I can think of to say is, “Why are you shocked? Could you please stop being shocked? Because it makes me feel like I’ve wasted my life. Thanks.” Outrage is just sensible, laudable and useful; but why the surprise? Chris Jackson commented in a news roundup that longtime Traditionalists understand that the New Mass itself was founded on that very principle: “Not offending the sensibilities of non-Catholics was the primary motivation of the architects of the New Mass…Far from being shocked that a modern bishop omitted the Creed from his Mass, I suppose we should be thankful that Paul VI didn’t see fit to remove the Creed altogether from his Novus Ordo Mass.”

But to see the reactions of shocked amazement from Catholics in comment threads you’d think it was the first time. It’s a bit disheartening that after reporting this kind of thing for… oh let’s see, what are we now… 2020? About two decades… Did it just not occur that the reason the Church seems like a doctrinal and liturgical post-apocalyptic wasteland was that the men in charge are consciously and deliberately making it so?

After George Weigel’s bizarre warning the other day not to take the Red Pill offered by the likes of the Remnant, LifeSite, the Wanderer, One Peter Five etc., it’s hard not to be tempted to just throw up our hands and say, “Fine, you like the status quo so much? You’re welcome to stay in your little bubbleverse of 1995 forever. Have fun with that, George. If you change your mind the rest of us will be out here dealing with the Real. If our years and years of revealing this situation in detail have not been convincing how did the incredible dog n’ pony shows of the Synods and the US bishops response of flaccid indifference to the rampant sexual abuse scandals not alert you? The sex scandals themselves should have seared away the rosy tint from your glasses eighteen years ago.”

It does seem clear, though, that a lot of other people are waking up. Those casting about for an explanation often find out that there has been a small subset of Catholics yelling the answer from the top of the tallest houses they can find for about the last five decades: “It’s NOT THE SAME RELIGION!” (Ok, rant over.)

Should we know this guy?

In brief, yes, we should. He’s all the bishops of the New Religion that’s been injected into every structure, every organisation, every religious order, every diocese and nearly every parish in the Catholic world, like a virus, since 1965. Appointed bishop of Pinerolo, a pretty town near Turin in the Alps, by Pope Bergoglio in 2017, he has made a name for himself as one of the Italy’s most enthusiastically Bergoglian bishops, embracing his love for all religions, especially Islam, in the good old Freemasonic spirit of the “brotherhood of all mankind.” 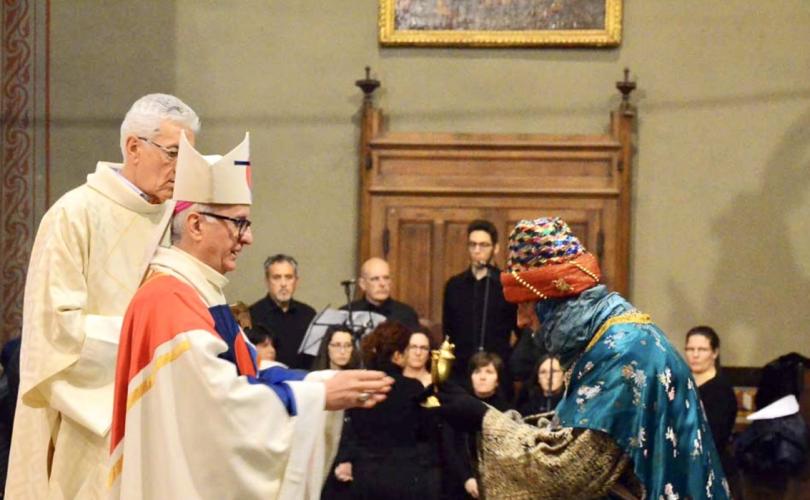 Novusordoism is the cult of Man. This is what the New Religion is made of; this is its constituent stuff: religiously indifferentist, specifically anti-creedal, humanistic, secular, horizontalist, man-centred with a few little Scriptural references tacked on as a figleaf. It’s easy for a person caught up in it, like a half-boiled frog, not to know he’s no longer a creedal Catholic, but objectively it just isn’t the same business. This bishop’s public refusal to confess the Creed of the Catholic religion at an ostensibly Catholic Mass on one of the highest feast days of the year[1] just shows that it’s finally coming out of the closet.

Thank God a million times for the internet because a quick little search of his name, Derio Olivero, will tell any adept Googler all he needs to know. Now I’ll give away a trick of the trade: with the Chrome browser’s autotranslate function it’s possible to find out what’s going on in original language sources with a tap of the trackpad.

Our Italian friends have got this guy’s number. Riccardo Cascioli, at La Nuova Bussola Quotidiana[2], the Remnant’s counterpart in Italy, has been reporting on Olivero’s wacky anti-Catholic shenanigans for some time. Upon his appointment to his current see, Olivero showed us that Bergoglio’s own little performance on the Loggia – bowing to the crowd and asking for their prayers – is a popular schtick among this crowd. Cascioli comments, “In the photograph we see him on his knees receiving the blessing of the people. I am ignorant, I admit it, but rather than blessing a bishop I expect that he, who received the laying on of hands at the end of a long chain of impositions that goes so far back in the time of the Church, will bless me.” 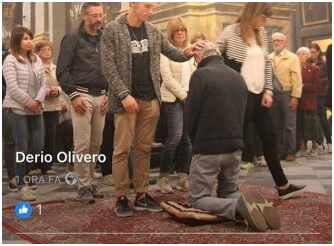 It wasn’t long before Bishop Olivero’s proclivities – and the reason he was picked – became clear. Avvenire, the newspaper of the Italian bishops’ conference, praised his governing style the same month he was appointed, “Olivero, new bishop of Pinerolo, diocese of dialogue.” Picturing him in a polo shirt, Avvenire – in the person of Pinerolo’s Vicar General - gushed over Olivero’s commitment to “ecumenism,” saying he’s “deeply convinced that ecumenism is the way that all the Churches must follow in order to be faithful to the will of the Lord.”

Bishop Olivero lost no time signalling his side following Amoris Laetitia, issuing in February 2018 the (I’m sure) unintentionally hilarious statement, “Marriage thus continues to be indissoluble but not unbreakable.”

“Is the direction to think also of a blessing on the new union?” Msgr. Olivero said. “In the document of the Piedmontese Episcopal Conference this is not contemplated, but I think it could be a good solution. Having made a necessary journey, a blessing can be foreseen which means recognizing the validity of the relationship.”

After all, “this is what religions are for; to make us human”

Religious indifferentism is especially praiseworthy among Italian Catholic elites in a place and time that “boasts a strong Waldensian[3] presence” as well as the increasing numbers of Muslim African migrants installed in every last nook and cranny of the country by Italy’s branch of Caritas Internationalis.

Since his elevation as their bishop has dedicated the diocese to an “open door” policy toward Islam, specifically offering their “appropriate spaces” to Muslims observing Ramadan. The diocese responded to apparently not so glowing reports from secular media:

“In recent days some media have written that, on the occasion of the Ramadan celebrations, the Catholic and Waldensian churches of Pinerolo will host the Muslim faithful, making their premises available for the weekends (moments when the highest is expected influx of people). The news must not go unnoticed. In a national and international climate in which messages of exclusion often prevail, and in which coexistence between different cultures and religions is often difficult, there is a city, Pinerolo, and its territory, the Pinerolo area, which have made dialogue between religions and of ecumenism one of its strengths. The reasons are profound, historical. This is a territory that for centuries has seen the strong contrast between the Catholic Church and the Waldensian Church. Today these realities dialogue, confront each other, organize joint initiatives. It is precisely the two religious denominations most represented in the area that open today, open their spaces to believers of Muslim faith allowing them to carry out the rites in appropriate premises. As a city, we cannot help but rejoice, amplifying the message that the Churches present in our area send us today: the coexistence of different cultures and religions is a wealth, it is possible to achieve true integration, and dialogue is the way to go.”

In a talk to local Muslims in June 2018, the bishop said, “Praying and bowing is the way to entrust oneself to God, but it is also the way to see that the sky is open and the horizon is much bigger than what our eyes see. I hope that my community of Catholic Christians and your community will be in Pinerolo those who work to build bonds, to build mercy, forgiveness, peace. This is what religions are for. To make us human.”

But he’s so NICE!

“Bishop Derio” is known and loved in his former postings for his warmth and chummy approachability, eschewing both clerical dress and anything too specific about the Catholic religion in most of his public appearances – he’s a regular on local radio. His first episcopal letter is immortalised in a (so far) nine-part video series on the diocese’s very own YouTube channel (so hip to the yoots!) with the title, “Would you like a coffee?”

His New Year’s message to his flock was warmly titled, “Face to face with Derio. The Lord is in line with you.” Dressed in a blue cardigan with a big rustic wooden cross, the chummy bishop tells us that God is our chum: “Christmas is really a loving gesture of God come down to earth and stay here beside you…and stays here with you to walk with you all year round…” Isn’t that nice? And it garnered about the interest it deserves; a whopping 605 views on YouTube.

In a chummy radio interview just before his consecration as bishop, Chum Derio said he feels a bit “with heavy shoulders” to think about being bishop, and “a little wounded” but that he has “the proximity of many people, many faces…giving incredible strength and also a little confidence in me that I am a little one… I'm just a little priest.” I bet it made the housewives weep in an ecstasy of holy chumminess.

And of course in all his warm chummy approachable niceness, he’s reminding this Anglo of the excruciating awkwardness of Basil Fawlty: “Don’t mention the Son of God!” The name of Jesus Christ is conspicuously absent.

This is the reality of the Church since 1965. Deal with it.

[1] Culturally, Epiphany is a much bigger deal in Italy than Christmas day.

[2] No, I’m not giving you the translation. I just told you to do the Googling.

[Comment Guidelines - Click to view]
The Remnant values the comments and input of our visitors. It’s no secret, however, that trolls exist, and trolls can do a lot of damage to a brand. Therefore, our comments are heavily monitored 24/7 by Remnant moderators around the country.  They have been instructed to remove demeaning, hostile, needlessly combative, racist, Christophobic comments, and streams not related to the storyline. Multiple comments from one person under a story are also discouraged. Capitalized sentences or comments will be removed (Internet shouting).
The Remnant comments sections are not designed for frequent personal blogging, on-going debates or theological or other disputes between commenters. Please understand that we pay our writers to defend The Remnant’s editorial positions. We thus acknowledge no moral obligation whatsoever to allow anyone and everyone to try to undermine our editorial policy and create a general nuisance on our website.  Therefore, Remnant moderators reserve the right to edit or remove comments, and comments do not necessarily represent the views of The Remnant.
back to top
Last modified on Monday, January 13, 2020
Tweet

More in this category: « Andreas Hofer: Hero of the Sacred Heart of Jesus The Eternal Sunshine of the Spotless Vatican II Mind »