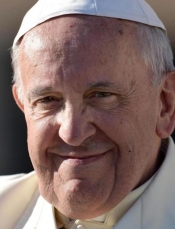 Here is the most recent timeline of events:

*On February 4, 2019, Francis flew to Abu Dhabi and co-signed the Abu Dhabi Declaration, along with his Islamic collaborator, Grand Imam Ahmed Al-Tayyeb. Read the Abu Dhabi Declaration, in which Francis declares that “God wills the diversity of all religions.” While this heretical statement has been denounced by Bishop Athanasius Schneider and Cardinal Raymond Burke and a few others, the Declaration is the foundational statement which lays the “theological” groundwork for the new religion, conveniently, but inaccurately described as the “Abrahamic Faith.” No mention of Jesus Christ in the document.

*On February 4, 2019, the Higher Committee of Human Fraternity of the Abrahamic Faith was announced. This group of faith leaders will be comprised of hierarchs from all the faith denominations. All major religions appoint elders, prelates, imams and gurus, so too, the Abrahamic Faith will mimic with its own Higher Committee. No mention of Jesus Christ in the founding documents here.

*On September 22, 2019, the Abrahamic Faith House was unveiled in New York City. This will be the new spiritual headquarters for the new one world religion which will house a mosque, a church and a synagogue. View the Orwellian designed center here. Catholicism has its Vatican, Islam has Mecca, and the new one world religion will have its own headquarters. No mention of Jesus Christ here.

*On December 4th, 2019, The Vatican requested that the United Nations declare a World Day for Human Fraternity on February 4th to celebrate the anniversary date of the signing of the Abu Dhabi Declaration. Conveniently, now the One World Religion will have its own Feast Day! No mention of Jesus Christ by the Vatican in this announcement.

*On October 11-18, 2020, the Vatican will host the Global Education Alliance in Rome. This event was previously scheduled for May 10, 2020, but was postponed because of the Corona Virus. Please watch the Pope’s video announcement of the event and its emphasis on humanism, not Christianity. This will be a global extravaganza, flush with celebrities and elites to celebrate and brainwash young people into the one world religion of humanism and its climate change propaganda.

The danger of these initiatives is apparent in the alluring and amorphous language employed by the Vatican and Francis to indoctrinate the youth into buying into this socialistic economy and its supporting new Abrahamic faith religion. Read carefully this meaningless, and innocuous sounding blather in the Vatican press release on the Global Education Compact: No mention of Jesus Christ here.

In his written message, the Pope said the Global Education meeting “will rekindle our dedication for and with young people, renewing our passion for a more open and inclusive education, including patient listening, constructive dialogue, and better mutual understanding.”

The goal, he urged, is to develop “a new universal solidarity and a more welcoming society,” adding that education is key to positive change. Francis continues to promote human fraternity not Catholicism, as the pathway to peace and solidarity and cites his dubious Abu Dhabi Statement as a source document:

For this project to succeed, Pope Francis said, fraternity must be allowed to flourish and discrimination swept aside, as he urged in the Document on Human Fraternity signed in Abu Dhabi with the Grand Imam of Al-Azhar. The Pope said the first step is finding “the courage to place the human person at the center.” This means recognizing the world’s interconnectedness and re-thinking economics, politics, growth, and progress, giving pride-of-place to an integral ecology that rejects the throw-away culture.”

He borrows Hillary Clinton’s favorite book title as the image for the event-it takes an educational village!

“Never before has there been such need to unite our efforts in a broad educational alliance, to form mature individuals capable of overcoming division and antagonism, and to restore the fabric of relationships for the sake of a more fraternal humanity.”

Quoting an African proverb – “It takes a whole village to educate a child” – Pope Francis called for the creation of an “educational village”.

Francis hopes that everyone would participate according to their respective roles to form a “network of open, human relationships.”

No mention of Jesus Christ in the Vatican announcement of the Global Education Compact.

*On November 19-21, 2020-the Vatican will sponsor the Economy of Francesco event in Assisi Italy. This will serve as the “moral basis” of the structure of the one world economy, driven by the UN climate change hoax of global taxation, destruction of national sovereignty, and promises of utopian peace and justice. Over 500 youth are invited to this event to brainwash and propagandize on the value of socialism. All these events are grounded in the ecological and ideological predicate of Francis’ Laudato Si, his eco encyclical.

Also, watch the Economy of Francesco Vatican video (below) by UN Sustainable Development (Depopulation) Goals Chief, Jeffrey Sachs, a close consultant of Francis, as he describes the purpose of this event-a new Utopia on earth promised by the UN bureaucrat! Again, the eco-encyclical, Laudato Si, is the foundational document underpinning this event, named for both St. Francis of Assisi and Pope Francis. No mention of Jesus Christ here!

Francis and his Vatican minions are sponsoring and promoting these global events to launch and celebrate the rollout of the new Abrahamic Faith. The title of Vicar of Christ, held by the Catholic Pontiff is not only an anathema, but more importantly, a theological hindrance, to the creation and rollout of the One World Religion.

In this new religion of humanism, Jesus Christ is absent, eliminated as the Savior of the world, our Prince of Peace. In the new religion of Humanism, man and nature are equal and they replace God and His Son.

Thus, Francis needed to quickly and subtlety dispense with the title which elevates his role as Vicar of Christ. He placed it in the ash heap of footnotes where he is prone to hide his diabolical machinations of heresy.

[Comment Guidelines - Click to view]
The Remnant values the comments and input of our visitors. It’s no secret, however, that trolls exist, and trolls can do a lot of damage to a brand. Therefore, our comments are heavily monitored 24/7 by Remnant moderators around the country.  They have been instructed to remove demeaning, hostile, needlessly combative, racist, Christophobic comments, and streams not related to the storyline. Multiple comments from one person under a story are also discouraged. Capitalized sentences or comments will be removed (Internet shouting).
The Remnant comments sections are not designed for frequent personal blogging, on-going debates or theological or other disputes between commenters. Please understand that we pay our writers to defend The Remnant’s editorial positions. We thus acknowledge no moral obligation whatsoever to allow anyone and everyone to try to undermine our editorial policy and create a general nuisance on our website.  Therefore, Remnant moderators reserve the right to edit or remove comments, and comments do not necessarily represent the views of The Remnant.
back to top
Last modified on Wednesday, April 8, 2020
Tweet

More in this category: « WEAPONIZING PANIC: Will COVID19 Be Trump's Waterloo? CORONAGATE: The Truth Emerges »