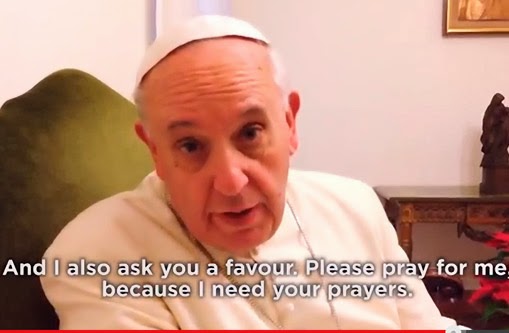 Another day, another bombshell in the Conciliar Church. In his homily today during Friday Mass in Santa Marta, the Pope relayed the following to the congregation:

"Many thinkers in the Church were persecuted, as well. I think of one, now, at this moment, not so far from us: a man of good will, a prophet indeed, who, in his writings reproached the Church for having lost the way of the Lord. He was summoned in short order, his books were placed on the index [the list of works that were banned or restricted to experts because of their problematic, erroneous and even heretical content], they took away his teaching positions – and thus, this man’s life ended – and it was not so long ago. [Now] time has passed, and today he is Blessed. How is it, though, that he, who yesterday was a heretic, is today a Blessed of the Church? It is because yesterday, those who had power wanted to silence him because they did not like what he was saying. Today the Church, who, thanks be to God knows repent, says, ‘No, this man is good!’. Moreover, he is on the way to sainthood: He is a Blessed.”

Notice that Francis does not say that the heretic in this example repented. No, it was the Church who apparently repented and saw the light! Of course this vision of sainthood immediately opens up new vistas for progressives. One can already see liberals using this as a basis of rehabilitation and potential sainthood for all of the notorious Modernists condemned by Pius X such as Loisy and Terrell.  After all, wasn't it Francis' right hand man, Cardinal Maradiaga who said:

Further, what does this mean for Francis' concept of sainthood? Can the Church's previous condemnations of heresy be in error? Can dogma "evolve" to the point where what was formerly heretical is now seen as good? Can what was once obstinate defiance turn into "heroic virtue"? And if Francis sees even previous heretics worthy of canonization, did not Remnant columnist Peter Crenshaw have a point when he recently asked the following:

If, on April 27, 2014 Pope Francis declares John Paul II to be a “saint”, but by “saint” he means an “ecumenical witness to the Faith” which could just as well be someone like the Baptist Martin Luther King or the Lutheran Dietrich Bonhoeffer, is he truly intending to use papal infallibility to bind what the Church has always bound in a canonization? Or is he rather formally recognizing ecumenical examples whose lives he believes we can learn from?

The combox is open for anyone who wants to take a guess who the Pope is referring to.

Published in Fetzen Fliegen
back to top
Last modified on Saturday, April 5, 2014
Tweet

More in this category: « Saints in Praise of Heretics Vatican Surrenders to Luther: A Neo-Catholicism Update »