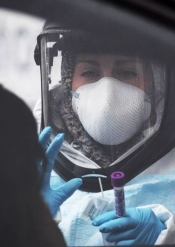 There are many throughout government who believe that testing is the key in combating Covid-19.  Provided employers test their workers for Covid, then why not test for the flu, HIV, strep throat, TB, or the common cold?

Such a proposal is unrealistic medically and financially and would infect many struggling businesses that are attempting to reestablish their footing with additional fiscal trials.

Employers certainly have not budgeted for any tests, so who pays for the acquisition, set-up, maintenance, test validation, quality control, and those inevitable false positive and false negative results?

Where does the money come from for additional paid sick leave, beyond what is already provided?   Setting aside a host of privacy, constitutional and HIPAA issues regarding workplace testing, why should this fall on employers who incur enough costs regarding healthcare?

Testing negative on Monday does not mean you won’t become infected by Tuesday.  Moreover, testing employees who exhibit symptoms does not necessarily identify those infected who are asymptomatic.  If you are asymptomatic, but carrying the virus, do you necessarily have a fever?  If so, what does taking one’s temperature accomplish?

Unless employees testing negative on Monday are expected to remain quarantined at work indefinitely, employer testing is simply unworkable.  Not every business can screen employees, and for those that can, you would need to screen everyone, daily.

There is no need to burden businesses with fighting respiratory illnesses in the workplace.  If there is one way to take a temporary problem and turn it into a permanent one, this is it.

Both Sweden and Taiwan are pragmatic, recommending self-isolation among high-risk citizens but they have not shuttered their economies. More than half who have succumbed were in nursing homes.  There are many who do not want the patient to get well, and prefer to devastate the economy especially if it means President Trump’s demise.

Draconian testing will always be advocated by the guys selling the tests.

After a good dose of antibody testing and analysis is done, this columnist predicts millions of Americans will have already had this virus and the true mortality rate will be 100 times lower than initially forecasted. If anyone doesn’t think the virus was here back at the end of 2019 is fooling themselves.

The Milken Institute is testing more than 150 drugs.  As more gain immunity, the virus will fade as not everyone is equally susceptible to hospitalization and death. Testing and tracking may help suppress future outbreaks, but it will not eliminate them.  Vaccine development needs to be ethical, which means no aborted human fetal cells.  Likewise, no American should be forced to choose between being vaccinated provided it violates their conscience.

Will a vaccine will protect everyone?  How successful is the annual flu vaccine? The common cold is also caused by a coronavirus, and yet no vaccine.

Even when the pandemic subsides, the threat remains.

Educate and apprise everyone on the risks.  Quarantine high risk groups, while everyone else gets on with their lives while taking the precautions they deem necessary.

During every flu season it’s not unusual for tens of thousands to die, most are elderly with compromised immune systems.  All the while, no one is tested.  Now, lawmakers talk about determining who can work, or travel based on a virus that may kill 100,000 in a nation of 330 million.

How often do you test?

What if you get exposed between tests?

Why has such testing never before been needed in any past epidemics that killed far more?

What’s going to be the threshold for employing such tactics in the future?

How much larger will government be after they allow this crisis to pass?

Anyone who thinks they are in a position to demand that tens of millions of otherwise healthy Americans must subject themselves to medical testing in order to make a living fails to comprehend our inalienable rights of life, liberty, and pursuit of happiness.

What about the next pandemic?

This is very dangerous stuff, and it’s not Covid-19.

[Comment Guidelines - Click to view]
The Remnant values the comments and input of our visitors. It’s no secret, however, that trolls exist, and trolls can do a lot of damage to a brand. Therefore, our comments are heavily monitored 24/7 by Remnant moderators around the country.  They have been instructed to remove demeaning, hostile, needlessly combative, racist, Christophobic comments, and streams not related to the storyline. Multiple comments from one person under a story are also discouraged. Capitalized sentences or comments will be removed (Internet shouting).
The Remnant comments sections are not designed for frequent personal blogging, on-going debates or theological or other disputes between commenters. Please understand that we pay our writers to defend The Remnant’s editorial positions. We thus acknowledge no moral obligation whatsoever to allow anyone and everyone to try to undermine our editorial policy and create a general nuisance on our website.  Therefore, Remnant moderators reserve the right to edit or remove comments, and comments do not necessarily represent the views of The Remnant.
back to top
Last modified on Saturday, May 2, 2020
Tweet

More in this category: « Trump makes Sure Planned Parenthood Does NOT get COVID-19 Bailout PARKING LOT PRIEST: Good Shepherds vs. Hirelings »