When he is not busy denying Adam was a “literal figure,” claiming there is “reasonable hope” no souls are in Hell, and assuring Ben Shapiro that Christ is merely the “priveleged route” to salvation, it seems Bishop Robert Barron likes to spend his free time attacking Traditional Catholics.

In an August 3 National “Catholic” Distorter piece, author Christopher White informs us that Barron hosted an “invite-only” Zoom meeting on July 29. Was this meeting to discuss Pope Francis’ troubling July 26 tweet that, on the memorial of Saints Joachim and Anne, referred to them as Jesus’ “grandparents” in quotation marks?

Was it to discuss what should be done about Vatican II and the New Mass as they continue to speed up the decline and fall of the Faith around the globe?

Was it to finally condemn the promotion of the pagan Pachamama idol at the Amazon synod?

Was it to firmly state the perennial Catholic teaching on the impossibility of women deacons, since Francis recently started yet another working group to study the issue after his first one didn’t give him what he wanted? No.

Instead, Barron’s secret meeting, which included such liberal and Neo-Catholic news organizations as America Media, Catholic News Agency, Catholic News Service, Crux and Our Sunday Visitor, was called to address, “disturbing trends in the online Catholic world," including the rise of "radical Traditionalist" movements that are often marked by personal attacks and vitriolic commentary.”

The article defines "Rad trads" as young Catholics who prefer traditional liturgy, including the Latin Mass, and subscribe to more conservative political beliefs and religious practices. The horror! Brandon Vogt, the content director for Barron’s “Word on Fire Catholic Ministries,” which could be more aptly named “Church on Fire” ministries, stated, “All of these are major pastoral issues, which is why I proposed to Bishop Barron, in his capacity as bishop, to host a meeting with various Catholic media leaders to discuss these items."

Note that to Vogt and Barron, “the influence of the so-called “radical Traditionalist” (or “rad-trad”) movements online (those who prefer the Latin Mass and subscribe to more conservative beliefs) is a “pastoral issue” worthy of devoting a secret meeting with Catholic media outlets about in order to address. Yes, it seems that if we simply root out all of those pesky young women who insist on wearing chapel veils as well as those rigid young men who wear suits to their Latin Masses, and who believe everything the Catholic Church taught for 2,000 years we can get on to singing a new church into being.

It seems that Bishop Barron’s anger began to be stirred with the response to his July 7 article. Catholics were enraged at the lack of the bishops’ protection of statues of Fr. Junipero Serra which were allowed to be defaced by left-wing rioters and the weak episcopal reaction to the vandalism and sacrilege. In the face of this outrage, Barron penned a tone deaf piece on his blog which defended a prior tweet of his which stated that it was not the bishops’ job to defend the statues, but the laity’s job. 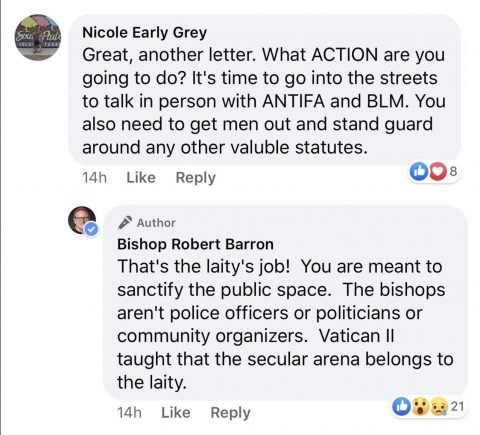 As anyone with any Catholic sense could have predicted, this didn’t sit too well with Barron’s critics. The group Restoring the Faith responded with the following meme: 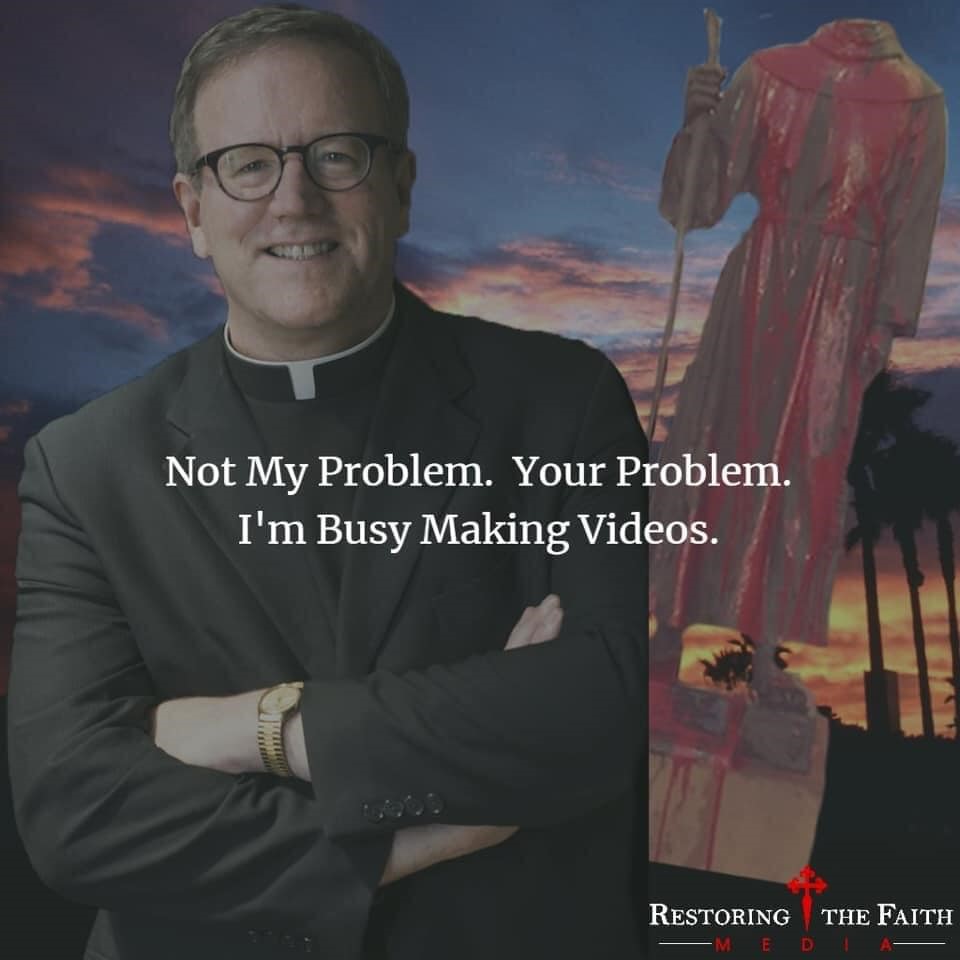 Bishop Barron, instead of apologizing for his insensitivity and wrongheadedness on this issue, proceeded to issue a 7 minute video stating that he preferred dealing with atheists than his Catholic critics. He decried the “calumny” directed towards him over his article by “armies of commenters” and “internet provocateurs” calling him “spineless,” “gutless,” and “cowardly.” Barron complained he had to assign three of his co-workers at Word on Fire, full time, for four days, removing “poisonous comments” in response to his article whose time could have been better spent on “evangelical pursuits.” Since Barron has stated he has reasonable hope no souls are in Hell and sees Christ as merely the privileged route of salvation, one truly wonders what “evangelical pursuits” those three staff members would have been conducting.

Barron then goes on longing for the days when critics would have to physically mail in their written criticisms and be at the mercy of an editor as to whether they were even heard. Barron then softly asks if he may, “as a spiritual father, issue a kind of pastoral cry of the heart” before then abruptly yelling at the camera “Cut it out!” He then refers to the reaction to his article, not the bishops’ inaction in protecting Fr. Serra’s statues from the mobs, as a “moral outrage” and a “mortal sin.”

Apparently some of the critics who got under the Bishop’s skin must have been Traditional Catholics, as soon after, on July 22 he went after them in a video and several Twitter posts focused on them. For example Barron states, “Since the Church’s tradition includes the Second Vatican Council, it's therefore impossible to repudiate Vatican II and claim to be a faithful traditionalist. There's nothing traditional about rejecting an ecumenical council.” This is, of course, a false catch-22, for if one accepts the parts of Vatican II which contradict prior Tradition then the entire concept of Tradition is made meaningless.

Barron’s video from July 28 is entitled, “Should Bishops Allow Priests to Offer Mass in Latin?” Apparently, Bishop Barron has spent so much time making videos and blogging over the last 13 years, he missed the Motu Proprio, Summorum Pontificum, which allows any priest to say the Latin Mass without his bishop’s permission.

In a July 29 video entitled “What Went Wrong After Vatican II?” Barron ignores the obvious answer, Vatican II itself, and instead, amusingly lists the fruits of Vatican II: “poor liturgical implementations of the great Council, the rise of secularism, and the emergence of a hyper-individualistic culture have left many Catholics detached from the transcendent.”

Barron’s statement lamenting the “poor liturgical implementations of the great Council” is an amusing irony considering that Bishop Barron proudly participates in the Los Angeles Religious Education Congress (REC) (should be spelled WRECK) which has featured year after year of Masses chock full of sacrilege, irreverence, terrible knock off Disney music, not to mention plain poor taste. Please see how long you can make it through the following two hour 2020 REC Mass (featuring disgraced Cardinal Mahoney and Bp. Barron concelebrating) before tapping out.

Also, in a July 30 tweet Barron says “we cannot hate the culture...” Then on August 3 he tweeted that, “Racism is deep within our cultural DNA.” Thus, according to Barron we cannot hate our racist culture. Once the rabid left puts these tweets together, you can expect them to destroy any future statues of Bp. Barron that any church would be unfortunate enough to erect.

It is not clear what the result, if any, will be from Barron’s secret emergency meeting regarding the existential threats of Trads expressing their opinions online. The Distorter article mentions that Barron previously proposed the following to National Catholic Register earlier this year, “he suggested that bishops may want to consider introducing "something like a mandatum for those who claim to teach the Catholic faith online, whereby a bishop affirms that the person is teaching within the full communion of the Church."

In addition, the Distorter reported that, “Vogt said the meeting was not hosted in coordination with the Communications Committee of the U.S. bishops nor with the Committee on Evangelization and Catechesis, of which Barron is the chair.”

Thus, it is not out of the realm of possibility that Barron was floating his proposal to several Catholic media outlets he deems friendly to him and who may stand to benefit from receiving such a “mandatum” from his friends at the USCCB as they attempt to marginalize Traditional Catholic publications by not granting such a mandatum to them. The irony is that Bishop Baron would now have to deny his mandatum to the writings of Bishop Schneider and Abp. Vigano who have both leveled very articulate and biting criticisms of Vatican II.

In the final analysis, whatever action Bishop Barron takes will be too little too late. What he and other Neo-Catholic commentators fail to realize is that the latest round of criticism from even princes of the Church against Vatican II is no mere flare up that can be put out with a mandatum. Instead it is the crest of a wave of righteous and just indignation that has formed over the course of fifty years. During that time faithful Catholics have seen every sign of a once vibrant Catholic life and culture destroyed with their own eyes by Vatican II and its innovating disciples.

[Comment Guidelines - Click to view]
The Remnant values the comments and input of our visitors. It’s no secret, however, that trolls exist, and trolls can do a lot of damage to a brand. Therefore, our comments are heavily monitored 24/7 by Remnant moderators around the country.  They have been instructed to remove demeaning, hostile, needlessly combative, racist, Christophobic comments, and streams not related to the storyline. Multiple comments from one person under a story are also discouraged. Capitalized sentences or comments will be removed (Internet shouting).
The Remnant comments sections are not designed for frequent personal blogging, on-going debates or theological or other disputes between commenters. Please understand that we pay our writers to defend The Remnant’s editorial positions. We thus acknowledge no moral obligation whatsoever to allow anyone and everyone to try to undermine our editorial policy and create a general nuisance on our website.  Therefore, Remnant moderators reserve the right to edit or remove comments, and comments do not necessarily represent the views of The Remnant.
back to top
Last modified on Friday, August 7, 2020
Tweet

More in this category: « Vatican II is Fake News A Powerful Engine of Disenchantment: The Episcopal Program to End the Ratzinger Era »