Seven Points to Consider about the “Canonization” of Paul VI 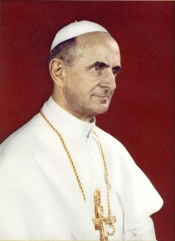 Two years ago, on October 14, 2018, Pope Francis undertook to canonize several people, including his predecessor, Pope Paul VI. Of course, it is a pope’s prerogative to beatify or canonize anyone he thinks fit to be beatified or canonized. But this does not mean that, in every single case, there is no room for doubts or difficulties in the matter. In this column I will offer seven points that Catholics deserve to know.[1]

First, it is an open theological question whether canonizations must be considered infallible acts of the papal magisterium. While theological consensus has favored infallibility, the Church herself has never made a binding determination on the matter, such that the opposite position would be ruled out in principle. There may be grave reasons for which it would not be unreasonable for Catholics to question a particular canonization.[2]

Second, canonizations have always been understood to be an official response to a popular cultus or devotion. In recent times, however, certain beatifications and canonizations seem to have been driven by political motivations, in order to legitimize a certain “program.” A little comparison may help: the Church canonized only two popes from a span of 700 years (Pius V and Pius X), but now three popes from a span of 50 years (John XXIII, Paul VI, and John Paul II) have been canonized. Commentators have spoken of the real intention, which was to “canonize Vatican II.”

Third, the process by which beatifications and canonizations occur is not without significance. The traditional rigorous process, instituted by Pope Urban VIII (1623–1644) and brought to perfection by Prosper Lambertini (1734–1738, later Pope Benedict XIV, 1740–1758), was followed until 1969. Between 1969 and 1983 the process was in flux, until John Paul II established a new set of much-simplified procedures to speed up the making of saints. In particular, the role of the “devil’s advocate” was minimized, the total number of miracles required for canonization was halved from four to two (i.e., one each for beatification and canonization), and the “magnitude” of miracle expected has also been relaxed. These changes, taken together, increase the probability—even if it generally remains small—that a beatification or a canonization will be mistaken.

The cause for Giovanni Battista Montini in particular shows worrisome features. A source in the Vatican confirmed to me that the process was pushed ahead at such speed that the copious documentation from and about Paul VI in the Vatican archives was not exhaustively reviewed. An archive of such magnitude could still turn up problematic material—especially since, as historians know, Montini was involved in clandestine dealings with the Communists as part of the Vatican’s failed Ostpolitik.

Fourth, contrary to well-meaning attempts to downplay the difficulties, canonization does not mean simply that “a person’s soul is in heaven.” If such were the case, it would be possible to proceed forthwith to the canonization of thousands of individual Catholics who died devoutly receiving the Church’s last rites. (Indeed, this is the kind of “canonization” that routinely happens at modern funeral Masses, with or without evidence of the devout reception of last rites.) In truth, canonization has always meant that the saint is exemplary in the heroic exercise of the Christian virtues, and is therefore held up to the universal Church as a model to venerate and imitate, particularly by those who are in the same or similar positions or states of life. This, of course, is the fundamental reason why, historically, so few Christians have been named saints! Many people exercise some virtues sometimes, but very few exercise the panoply of virtues to an heroic degree. While saints need not be “flawless,” they are still genuine “giants” of the supernatural life. When it comes to Paul VI, unfortunately, there is abundant evidence that he not only failed to exercise certain virtues heroically, but also that he displayed the absence of certain virtues in his discharge of the papal office—above all in regard to the unprecedented magnitude and violence of the liturgical reform in the period 1964–1974, which he acted not as a servant of tradition but as its master and possessor.

Fifth, if some Catholics have doubts about Paul VI’s canonization, are they committed to thinking him a criminal and a villain? By no means. Paul VI did much that can be admired, or at least respected as compatible with his papal duties: his encyclical Mysterium Fidei of 1965, which reiterated traditional Eucharistic doctrine; his encyclical Sacerdotalis Caelibatus of 1967, which defends clerical celibacy; his Credo of the People of God of 1968, a resounding reaffirmation of the Catholic Faith; and most famously, his encyclical Humanae Vitae of 1968, which repeated the Church’s teaching that any deliberate attempt to thwart the procreative end of the marital act is sinful. Nevertheless, the fact that a person (be he a layman, religious, or cleric) has done many great things for Christ and His Church does not constitute, in and of itself, a reason to beatify or canonize him. There are dozens of popes from history who have done as much good as Montini did, or rather, far more good—and without the blemishes that mark his papal record and disqualify him from public veneration.

Sixth, even in the case of legitimate beatifications and canonizations, Catholics are not required to have a personal devotion to any particular saint or to invoke him or her as part of their own prayer life, nor would the elevation of someone to the standing of public veneration endow his every action with normative value or his every opinion with indubitable truth. As others have pointed out, the policies of canonized popes—including their liturgical decisions—have been questioned or overturned by later popes.

Seventh, we cannot go wrong venerating and imitating the great saints of the past whose heroic virtue is beyond any reasonable doubt, by objective standards and by the witness of generations of devotees. We also cannot go wrong approving and lauding any Catholic whose words and deeds obviously harmonize with the well-known doctrine, discipline, and tradition of the Church. On the other hand, we would be wise to refrain from venerating or imitating anyone whose heroic virtue there are objective reasons to doubt, or whose opinions on matters of grave importance, such as the sacred liturgy, are saturated with erroneous philosophical theories such as rationalism or utilitarianism.

Two years later, then, we can frankly say: the case for Montini has gained no strength, nor has a robust cultus on the part of the faithful shown any hints of existence. Rather, this “canonization,” like others, has merged into the general dystopian mess of this pontificate, the Augean stables that a future Roman pontiff will have the unenviable job of cleaning out.

[1] For a fuller treatment, see my article “Why We Need Not (and Should Not) Call Paul VI ‘Saint.’”

[2] See John Lamont, “‘The authority of canonisations’: Do all canonisations need to be accepted as infallible?”; idem, “Paul VI: The Infallibility of Canonizations and the Morals of the Faithful.”

[Comment Guidelines - Click to view]
The Remnant values the comments and input of our visitors. It’s no secret, however, that trolls exist, and trolls can do a lot of damage to a brand. Therefore, our comments are heavily monitored 24/7 by Remnant moderators around the country.  They have been instructed to remove demeaning, hostile, needlessly combative, racist, Christophobic comments, and streams not related to the storyline. Multiple comments from one person under a story are also discouraged. Capitalized sentences or comments will be removed (Internet shouting).
The Remnant comments sections are not designed for frequent personal blogging, on-going debates or theological or other disputes between commenters. Please understand that we pay our writers to defend The Remnant’s editorial positions. We thus acknowledge no moral obligation whatsoever to allow anyone and everyone to try to undermine our editorial policy and create a general nuisance on our website.  Therefore, Remnant moderators reserve the right to edit or remove comments, and comments do not necessarily represent the views of The Remnant.
back to top
Last modified on Tuesday, October 13, 2020
Tweet

More in this category: « LEPANTO REVISITED: Trump and the World on the Brink Those never Trump deplorables »