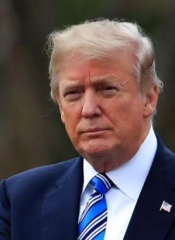 The Biden-Harris presidential placards popped up on lawns like dandelions on a warm spring day following that first presidential debate with the never-Trumpers cultivating among them.

Ever since President Trump emerged on the national political scene, a species of the never-Trumpers was conceived claiming to be turned off by his demeanor, off-handed quips, and Big Apple brashness.

They lament Trump’s errant past as justification not to vote for him because such things are beneath them. These never-Trumpers are held hostage by their emotions, finding it impossible to separate Trump’s policies from his personality.

Woefully, this presidential election’s emphasis continues to be centered on Trump’s outsized persona. This is the Democrat’s and mainstream media’s strategy with the extremism of the Democrat Party’s platform a nonissue.

If your main source of information is the mainstream press or social media, you are walking blindly into an election that provided Democrats win, will fundamentally change the country especially for your children and grandchildren.

Without question, Trump can be abrasive and will never be mistaken for an altar boy. For Trump, his presidency has been a matter of substance over style.

Objectively, Trump has accomplished much of what he promised.

Trump’s administration has arguably orchestrated the most historic development in Middle Eastern diplomacy in over half a century. Countries once hostile to Israel, like the United Arab Emirates and Bahrain, now formally recognize Israel with additional Arab nations set to follow. Moderate regimes throughout the Middle East are prevailing, while radical groups like Hamas, ISIS and al-Qaeda are not.

Provided the Obama administration even came close to such success, there would be a second Nobel Prize for Obama, while Trump walks away with nothing, but history on his side. Trump got us out of the pathetic Iran nuclear deal, while expanding the economy that saw record levels of employment and higher wages for blacks, Latinos and women, while buoying every 401k from sea to shining sea.

Carbon emissions have been reduced more than those nations still locked into the Paris climate treaty. Illegal immigration has decreased, while more NATO members are meeting their longstanding military obligations. Trump refuses to back down to China, who continues to oppress both Christians and Muslims, while calling the Chinese out on their theft of American intellectual property. Moreover, Trump’s administration has renegotiated abysmal trade deals with the Middle Kingdom that has cost Americans trillions of dollars in revenue and millions of jobs for over two generations.

Over 200 federal judges have been confirmed by the Senate that will help reestablish constitutional lawfulness, while reigning in radical abortionists. If Trump loses, the abortion holocaust will greatly increase not only in the U.S., but worldwide.

This, however, is not worthy of today’s media that is nothing but an overwhelming partisan house organ for Democrats.

Throughout Trump’s first four years, there was not a single power that has not aligned against him and he refused to concede. There true target remains our nation’s longstanding Judeo-Christian traditional values, and in particular the enshrinement of abortion as a political sacramental.

The Left disdains Trump because he calls them out and without any political windsock pretense, while pulling no punches. The fact that some Christians say that they would never vote for Trump, who remains their steadfast ally, underscores just how much the secular infestation continues to poison and scatter godly people.

Never Trumpers are more than willing to double down in defiance as a lukewarm civil war continues to brew. Who has not watched in horror the arsonists rioting in the streets in so many Democrat run cities that continue to disregard the Rule of Law?

Trump has placed a spotlight upon the deep and murky bureaucratic swamp that infiltrates every avenue of our federal government that the never-Trumpers, RINOs, and those elite loving Globalists refuse to acknowledge. In retrospection, Donald Trump has been the most effective and conservative president since Ronald Reagan.

Trump’s 2016 election was an obstruction to the Democrat-Marxist steamroller that revealed their true, totalitarian nature. This is what has them so enraged and indignant.

Those never Trumpers may not be too excited over a Biden-Harris White House; but it very well be its cause and effect.

[Comment Guidelines - Click to view]
The Remnant values the comments and input of our visitors. It’s no secret, however, that trolls exist, and trolls can do a lot of damage to a brand. Therefore, our comments are heavily monitored 24/7 by Remnant moderators around the country.  They have been instructed to remove demeaning, hostile, needlessly combative, racist, Christophobic comments, and streams not related to the storyline. Multiple comments from one person under a story are also discouraged. Capitalized sentences or comments will be removed (Internet shouting).
The Remnant comments sections are not designed for frequent personal blogging, on-going debates or theological or other disputes between commenters. Please understand that we pay our writers to defend The Remnant’s editorial positions. We thus acknowledge no moral obligation whatsoever to allow anyone and everyone to try to undermine our editorial policy and create a general nuisance on our website.  Therefore, Remnant moderators reserve the right to edit or remove comments, and comments do not necessarily represent the views of The Remnant.
back to top
Last modified on Sunday, October 18, 2020
Tweet

More in this category: « Seven Points to Consider about the “Canonization” of Paul VI The USCCB: Stooges for the Democratic Party »