THE VATICAN: A Den of Thieves 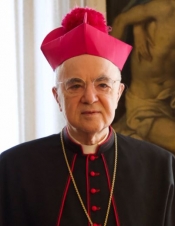 It would be misleading to limit our evaluation of events within the Church without framing them in the wider political and social context. The purpose has now been declared: destroying Nations from within by means of the deep state and the Church of Christ by means of the deep church, in order to establish the kingdom of the Antichrist, with the help of the False Prophet.
_____________

In the past few days, the latest news is that Bergoglio is dedicating his time to making a television series called Sharing the Wisdom of Time, produced by Netflix, which yesterday published a post on Twitter that summarizes its ideological point of reference: Praise Satan. It goes without saying that this multinational corporation is involved in the spread of immorality and vice, including the sexual exploitation of minors.

Similarly, in the past few days the Holy See has signed an agreement with the UN to promote sustainability and gender equality, thereby giving its support to an organization that promotes abortion and contraception. On the very day dedicated to the Immaculate Conception – December 8, 2020 – almost like a shameful insult against the Blessed Mother, a new partnership was officially instituted between the Vatican and the “Council for Inclusive Capitalism”[1] promoted by Lynn Forester de Rothschild, a close friend of Hillary Clinton and Jeffrey Epstein, after sending a message of praise to Klaus Schwab, the president of the World Economic Forum and theorist of the Great Reset.

And in order not to give rise to misunderstandings, after numerous appeals to obey the authorities in the emergency of the psycho-pandemic, it appears that the Covid vaccine will be made obligatory for all the officials and staff of Vatican City, despite the fact that is has been produced with aborted fetal tissue and provides no guarantee of being either effective or harmless.

I believe it is now understood beyond all reasonable doubt that the leaders of the present Catholic Hierarchy have placed themselves at the service of the globalist Oligarchy and Freemasonry: the idolatrous cult of the pachamama in the Vatican Basilica is now joined by a sacrilegious Nativity scene, whose symbology appears to allude to ancient Egyptian rites as well as aliens. Only a naive person or an accomplice can deny that in this whole chain of events there is a very clear ideological coherence and a lucid diabolical mind.

But as I have already pointed out, it would be misleading to limit oneself to an evaluation of events within the Church without framing them in the wider political and social context: there is only one direction being given in which both the main protagonists as well as the extras follow the same script. The purpose has now been declared: destroying Nations from within by means of the deep state and the Church of Christ by means of the deep church, in order to establish the kingdom of the Antichrist, with the help of the False Prophet.

The secret Sino-Vatican agreement, very strongly desired by Bergoglio and renewed a few weeks ago, fits perfectly into this disturbing picture, confirming the pactum sceleris which consigns Chinese Catholics to persecution, dissidents to reeducation, churches to demolition, Sacred Scripture to censorship and adulteration. It is no coincidence that this agreement, which the Popes always refused with disdain, was made possible thanks to the offices of the former Cardinal McCarrick and his accomplices, with the decisive help of the Jesuits: the actors, we know, are always the same. They are both corrupted and corruptors, both blackmailed and blackmailers, all united by their rebellion against doctrine and morals and indiscriminately subservient to anti-Catholic, indeed anti-Christian, powers.

Communist China constitutes the militant arm of the New World Order, both in the spread of a mutant virus created in a laboratory, as well as in the interference in the American Presidential elections and the enlistment of fifth columns in the service of Beijing regime. It also promotes the apostasy of the leaders of the Church, preventing her from proclaiming the Gospel and placing herself as a defending wall against the attack of the élite. The fact that this brings economic advantages for the Vatican makes the Bergoglian sect’s subservience to this infernal plan even more shameful, creating a significant counterpoint to the business of migrants, which is also part of the intentional dissolution of the society that once was Christian. It is disconcerting that such a scandalous betrayal of the mission of the Catholic Church does not merit firm and courageous condemnation from the Episcopate, which – in the face of evidence of an apostasy pursued with ever greater determination – does not dare to raise its voice out of fear or a false concept of prudence.

The words of Dr. Arthur Tane, Director of the Council on Middle East Relations, may sound bold and strong, but they have the merit of highlighting without false fears the subversion carried out under this most ominous “pontificate.” It is to be hoped that with the publication of Tane’s letter to Cardinal Parolin there will be some who will finally open their eyes, before the plot of the conspirators is accomplished. In this regard, we agree with commendable denunciation made by Cardinal Burke on the Feast of Our Lady of Guadalupe about the use of Covid for the purposes of the “Great Reset” – a denunciation that joins the one I made last May and have reiterated many times, as well as that of other Pastors who are faithful to the Word of God and solicitous towards their flock.

The letter of Arthur Tane to the Secretary of State closes with a citation from the Gospel that is more appropriate than ever: “Either the Church understands the significance of its mission, or it itself has become a temple of money changers. For in the words of Jesus: It is written that my house will be called a house of prayer, but you are making it a den of robbers (Mt 21:12-13).”

As Bishops, we cannot be silent: our silence would constitute an intolerable connivance and complicity with those mercenaries who, abusing a usurped power, deny Christ and consign souls to the Enemy of the human race.

[Comment Guidelines - Click to view]
The Remnant values the comments and input of our visitors. It’s no secret, however, that trolls exist, and trolls can do a lot of damage to a brand. Therefore, our comments are heavily monitored 24/7 by Remnant moderators around the country.  They have been instructed to remove demeaning, hostile, needlessly combative, racist, Christophobic comments, and streams not related to the storyline. Multiple comments from one person under a story are also discouraged. Capitalized sentences or comments will be removed (Internet shouting).
The Remnant comments sections are not designed for frequent personal blogging, on-going debates or theological or other disputes between commenters. Please understand that we pay our writers to defend The Remnant’s editorial positions. We thus acknowledge no moral obligation whatsoever to allow anyone and everyone to try to undermine our editorial policy and create a general nuisance on our website.  Therefore, Remnant moderators reserve the right to edit or remove comments, and comments do not necessarily represent the views of The Remnant.
Last modified on Tuesday, December 22, 2020