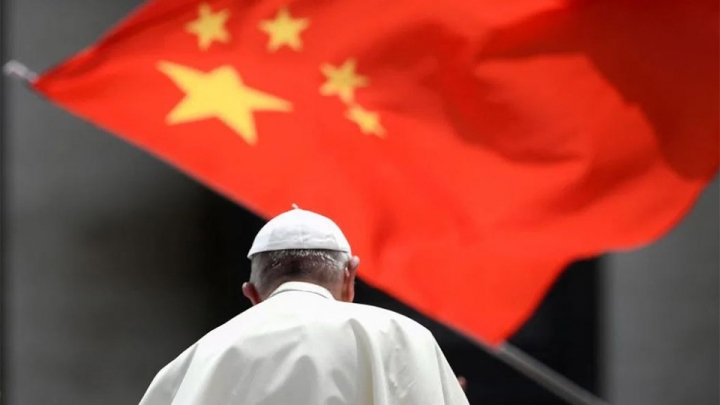 Lately, many American Catholics are sadly wiping tears from their Fox News-viewing eyes over losing Mass celebrated in bourgeois language of western oppressors. I urge them to look in inspiration to the Chinese Patriotic Catholic Association, home of true liturgical diversity and source of many (occasionally, reluctantly-supplied) graces. Like our Catholics, maybe Latin Mass Catholics can learn to embrace religious worship that is also acceptable to the Vatican. As our Holy Father says, “It is not possible to go backwards. We must go forward, always forward” - much like the Party’s bulldozers plowing into the old unpatriotic churches! For instance, for so many years, underground Chinese Catholics were enslaved to western anti revolutionary forms of worship. Like Latin Mass Catholics, they were too rigid! But today they are happy to be liberated by the faith passed on to them by the Chinese Communist Party. Since the Vatican’s deal with the CCP forged by the heroic and quirky Cardinal McCarrick - great friend to (preferably lanky) Patriotic Catholic Chinese young men between the ages of 16 through 21 - many reluctant converts from the underground church were offered opportunities to test developmental vaccines and joyfully became martyrs to the state-approved church. Others were afforded chances to worship in areas that enjoyed a greater probability of earthquakes and happily realized their patriotic destiny. As one of our patriotic Church fathers would have noted, the corpses of the martyrs are the fertilizer of the Chinese State. There is also a major similarity between Latin Mass Catholics who make frequent confessions and these proud patriotic martyrs who gave many signed confessions before their martyrdoms.

Also, since the start of the COVID 19 pandemic brought to our soil by unsanitary South Korean capitalists, many Latin Mass Catholics are used to watching live-streamed Masses in their private homes. Here the CCP does something superior by monitoring our patriotic services over CCTV and ensuring that plain clothes police officers protect worshippers from subversive ideologies. Latin Massers sometimes don’t like the more modern style of religious music, but our Catholics learned to love it! While unpatriotic Catholics once whispered hymns delivered to them by trouble making blue-eyed counterrevolutionary composers, now our Party’s security agents hear patriotic Church members belt out selections suggested by Rev. Major Zhi’s Ministry of Liturgical Music. A few favorites are “Here I am, General Secretary Xi Xinping,” “I Will Raise You Up on Vampire Bat Wings,” and Irish Catholic John Lennon’s “Imagine” (permitted as it is a rumored favorite of some of the west’s plain clothed religious sisters who are more sympathetic to the revolution). Worshippers who are shy about their singing voices get encouragement from the bayonets positioned directly behind them.

Furthermore, western parishioners who are still allowed to attend the Latin Mass even after Pope Francis’ Motu Proprio can ask our patriotic church members how nice it is to worship under the watchful eyes of centralized authority figures.

Latin Mass goers who are attached to decadent, flashy western vestments might get used to the subdued olive green frocks worn by our citizen-priests and manufactured in special sections of our Nike factories. Sometimes the garment workers are so eager to enjoy early martyrdom that the Party must install netting below the factory windows. (Some meddling western imperialists don’t like this situation, but the Vatican didn’t seem to mind)!

Chinese Patriotic Catholics also receive countless  graces from the many relics obtained from recent Uyghur Muslim converts to the faith who happen to die right after their conversions in ways that do not do damage to their internal organs. And harvested organs designated under the category Non Relic are sold to fund academic research conducted by scholars of our esteemed Ministry of Biblical Exegesis. There, translators pore over the ancient texts to produce invocations such as the St Michael Prayer for Protection Against Daryl Morey and Other Western Imperialist Propagandists (also known to be recited by NBA players of all denominations) and the Divine Anti Tariff Chaplet.

Also, many MAGA loving American Latin Mass Catholics seem to not like liturgical renovations, but our Patriotic Catholics love the ones undertaken by the Party’s Bureau of Church Architecture. Sometimes the renovations they recommend are so simple that the only tool necessary is a wrecking ball. And instead of the old symbol representing antiquated oppressive ideologies, the tops of our churches bear red stars announcing the coming of democratic liberation arising in the East. Much like the ones the Latin Mass Trumpers put on top of their winter seasonal trees.

Finally, many western Latin Mass goers seem to harbor an affinity for disgraced anti Communist ideologue Marcel Lefebvre (who, unlike our Patriotic Church bishops, never had his excommunication lifted). His grave stone bears the individualistic inscription “I have transmitted what I have received.” ( (I Cor. 15:3 Republished with permission from the Department of Banned Translations)

They should instead take their inspiration from our church leaders, whose funeral urns bear the words “We have transmitted what we have received with the Direct Approval of the Party.” This they can most sincerely express after learning the true joy that comes from earning the favor of both the CCP and the Vatican!

Uncle Ted McCarrick, Hero of CCP and lanky patriotic Catholic young men between the ages of 16 - 21, pray for us, and accept the gratitude of the Church and the Party!

Archbishop Lt Col Zhang is a fairly recent convert to the Catholic faith. He is planning on evangelizing the Chinese territory of Taiwan.

[Comment Guidelines - Click to view]
The Remnant values the comments and input of our visitors. It’s no secret, however, that trolls exist, and trolls can do a lot of damage to a brand. Therefore, our comments are heavily monitored 24/7 by Remnant moderators around the country.  They have been instructed to remove demeaning, hostile, needlessly combative, racist, Christophobic comments, and streams not related to the storyline. Multiple comments from one person under a story are also discouraged. Capitalized sentences or comments will be removed (Internet shouting).
The Remnant comments sections are not designed for frequent personal blogging, on-going debates or theological or other disputes between commenters. Please understand that we pay our writers to defend The Remnant’s editorial positions. We thus acknowledge no moral obligation whatsoever to allow anyone and everyone to try to undermine our editorial policy and create a general nuisance on our website.  Therefore, Remnant moderators reserve the right to edit or remove comments, and comments do not necessarily represent the views of The Remnant.
back to top
Last modified on Tuesday, August 3, 2021
Tweet
More in this category: « Is Pope Francis ‘fighting against God’? Pro-Life “Manichaeism” and the Mark Shea Intellectual Tradition »