Which Mass is the Stronger Oar? 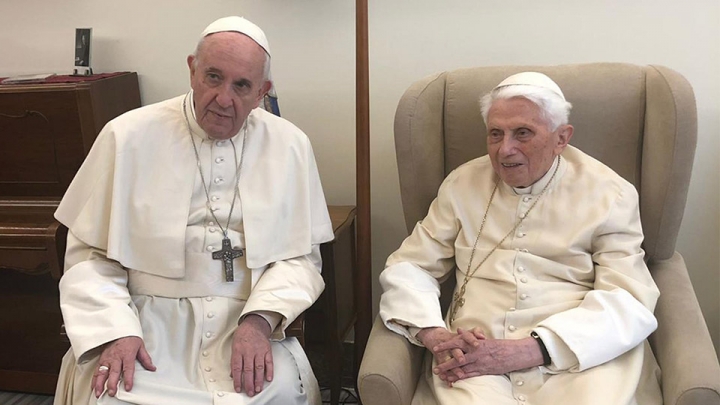 A sport might provide a metaphor for religion, which is good, as opposed to being a religion in itself, which is bad. St. Paul used metaphors from running and boxing, for example. Rowing provides a useful metaphor for the competition between the Traditional Mass and the New Mass, a competition which Traditionis custodes, the recent moto proprio from Pope Francis, has unfortunately raised to a fight for survival.

Terms vary, but in this writer's crew experience, "buckets" was the name given to a challenging training exercise. In an eight-man boat, six oarsmen would take a rest position with the oar's handle cradled in the lap and its blade flat on the water. The two remaining oarsmen, in adjoining seats, would sit in the ready position—slid forward, arms extended, the blade vertical in the water.

So, with the prior coach still living in the boathouse, Pope Francis decided to kick the better rower off the team.

At a signal from the coach, the men in ready position would start at maximum effort. The coxswain held the rudder straight. Unless the rowers were perfectly matched, each stroke progressively showed the stronger oar. The boat would be pushed in the direction opposite from the better rower, while the coach yelled, usually in vain, at the worse rower to match up.

It was really quite revealing. There was no hiding the facts. Everyone in the boat, everyone in the coach's launch, and everyone on shore knew which was stronger oar.

This metaphor illustrates Pope Francis' decision to abrogate Summorum Pontificum, the moto proprio of Pope Benedict XVI. The prior coach set up a bucket match between the Traditional Mass and the New Mass. Each year progressively shows everyone in the boat (priests and laity), everyone in the coach's launch (hierarchy), and everyone on shore (world), which mass is the stronger oar.

So, with the prior coach still living in the boathouse, Pope Francis decided to kick the better rower off the team. This is very confusing to the crew. They naturally wonder whose side the coach is on.

[Comment Guidelines - Click to view]
The Remnant values the comments and input of our visitors. It’s no secret, however, that trolls exist, and trolls can do a lot of damage to a brand. Therefore, our comments are heavily monitored 24/7 by Remnant moderators around the country.  They have been instructed to remove demeaning, hostile, needlessly combative, racist, Christophobic comments, and streams not related to the storyline. Multiple comments from one person under a story are also discouraged. Capitalized sentences or comments will be removed (Internet shouting).
The Remnant comments sections are not designed for frequent personal blogging, on-going debates or theological or other disputes between commenters. Please understand that we pay our writers to defend The Remnant’s editorial positions. We thus acknowledge no moral obligation whatsoever to allow anyone and everyone to try to undermine our editorial policy and create a general nuisance on our website.  Therefore, Remnant moderators reserve the right to edit or remove comments, and comments do not necessarily represent the views of The Remnant.
back to top
Last modified on Monday, August 2, 2021
Tweet
More in this category: « Pro-Life “Manichaeism” and the Mark Shea Intellectual Tradition One Breaking Olympic Hurdle: The Biggest Joke of All Time? »