One Breaking Olympic Hurdle: The Biggest Joke of All Time? 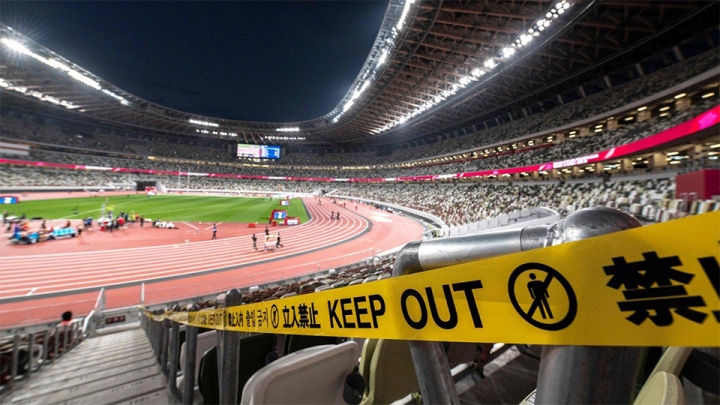 The Olympic Games have always had their share of controversy; from murders, hostages, Hitler’s “fascism demonstration project,” boycotts, cheating, drug use and biased officiating, all the way to postponements thanks to a pandemic.

The Tokyo Olympics were the biggest ever with 41 different sports. The International Olympic Committee (IOC) this year included: 3x3 basketball, skateboarding, sport climbing, surfing, and karate.  The games were delayed a year due to COVID and went on without any spectators, resembling your typical Joe Biden rally.

The games feature events like synchronized swimming, handball, and the javelin that most will dismiss until the next Olympic games.  According to a University of South Australia study, every gold medal won costs the winning country about $37 million in training expenses.  That clarifies why the bulk of the medals are won by the nations with the largest economies.

New to the Olympic village this time was the “anti-sex” bed that was supposed to prevent any sexcapades.  The cardboard beds were constructed to withstand the weight of one person and break with any abrupt movements.

No word on its success.

The Norwegian women’s gymnastics team refused to wear any revealing gymnastic garb, while the German women wore an outfit that not only covered them from neck-to-toe, but also occupied France and Poland.  Not to be outdone, one NBC sports announcer complimented a Chinese gymnast for having an infectious smile that apparently originated in a gym in Wuhan.

Apparently, the men’s squad was simply tired from all their kneeling.

The U.S. men’s basketball team took it on the chin in the first round, losing to – of all countries – France.  Apparently, the men’s squad was simply tired from all their kneeling.  You needed a score card to keep track of the endeavors of Olympic gymnast Simone Biles, who some analysts claim to be “the greatest of all-time.” At first, Biles turned quitting into the 21st century’s version of ersatz heroism... before returning to competition.

Tennis phenom Novak Djokovic may not have won an Olympic medal, but provided he wins the U.S. Open next month, he will become the first man since Rod Laver in 1969 to win all four Grand Slam events in the same year.

The IOC proclaimed that breakdancing would debut as a medal event at the Paris Games in 2024, which begs the question: is breakdancing a sport?

The Olympics certainly has a unique and storied history.

Somewhere the ancient Greeks are laughing, or perhaps weeping.

In 2013, the IOC announced that Greco-Roman wrestling which dates back to the original Olympics in ancient Athens, was finished.  However, a public outcry the world over ensued and the IOC reversed their decision.

At the initial “modern games” over a century ago, tug of war, fishing, kite flying, and pigeon racing were all contested events.  From 1912-1948, contestants for painting, sculpture, music, and literature were also awarded medals.  Since kites, fishing, and pigeons once held their own perhaps breakdancing fits as a complementary piece to the Olympic historic puzzle of contemporary competition.

Moving away from sports to performance art that depends on subjective judging and are nothing but exhibitions.  Could competitive eating, ballroom dancing and rapping be next?

How about Olympic medaling in croquet or lawn darts?  After all, another lawn game, badminton, is a medal event.

Somewhere the ancient Greeks are laughing, or perhaps weeping.

After failing to qualify for the 400-meter hurdle finals in 2016, American hurdler Sydney McLaughlin walked away from a million-dollar pro contract to matriculate at the University of Kentucky.  Prior to her gold medal winning race in Tokyo, McLaughlin told the media, “A lot of my life was trying to prove something, which is an endless cycle that will never fulfill you. My gifts are not to glorify myself. When I stand on the podium, I give the glory to God.”

McLaughlin echoed 1924 British Olympian Eric Liddell of “Chariots of Fire” fame who famously clarified his motivation: “When I run, I feel His pleasure.”

If there was one athlete who emulated the game’s longstanding essence it was pole vaulter, Matt Ludwig.  The Akron, Ohio native was anchored back home when another American vaulter tested positive for COVID and couldn’t compete.

Ludwig made the arduous journey from Ohio to Japan just in time.

Ludwig did not garner a medal, but earned the moniker, “The Overnight Olympian epitomizing the game’s genuine spirit.

[Comment Guidelines - Click to view]
The Remnant values the comments and input of our visitors. It’s no secret, however, that trolls exist, and trolls can do a lot of damage to a brand. Therefore, our comments are heavily monitored 24/7 by Remnant moderators around the country.  They have been instructed to remove demeaning, hostile, needlessly combative, racist, Christophobic comments, and streams not related to the storyline. Multiple comments from one person under a story are also discouraged. Capitalized sentences or comments will be removed (Internet shouting).
The Remnant comments sections are not designed for frequent personal blogging, on-going debates or theological or other disputes between commenters. Please understand that we pay our writers to defend The Remnant’s editorial positions. We thus acknowledge no moral obligation whatsoever to allow anyone and everyone to try to undermine our editorial policy and create a general nuisance on our website.  Therefore, Remnant moderators reserve the right to edit or remove comments, and comments do not necessarily represent the views of The Remnant.
back to top
Last modified on Saturday, August 7, 2021
Tweet

More in this category: « Which Mass is the Stronger Oar? Alberta is DONE with COVID »