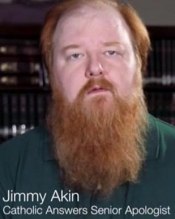 As everyone knows by now:

An Argentinian woman is claiming Pope Francis phoned her on Monday with some doctrine-breaking news.

The popular pontiff, who is known for making cold calls to lucky members of his flock, reportedly had an important message to share with Jacqui Lisbona and her previously divorced husband, Julio Sabetta.

“A divorcee who takes communion is not doing anything wrong,” the pontiff purportedly said during the call, according to the Telegraph and La Stampa.

A Vatican representative confirmed to CNN that the call took place, but said the content of the call was a private matter between a pastor and his parishioner. ..

The woman married Sabetta in a civil ceremony more than 20 years ago. Although she is happy with her current husband and has two teenage daughters from the marriage, she still isn’t allowed to take communion at her local church.

“[The priest] told me that every time I went home, I was going back to living in sin,” she said.

She wrote to Francis six months ago about her troubles, confessing that she was considering taking communion at a church where she is a stranger, but fearing that it would be “violating Church rules.”

Her answer reportedly came straight from the top…

Sabetta says Francis introduced himself as “Father Bergoglio” before apologizing for taking six months to reply.

"She spoke with the Pope, and he said she was absolved of all sins and she could go and get the Holy Communion because she was not doing anything wrong," Sabetta said, according to CNN.

In response to Lisbona's priest, Francis reportedly said, “There are some priests who are more papist than the Pope.”

Neo-Catholic apologists sprung almost immediately into full damage control mode. Catholic Answers apologist Jimmy Akin took the lead. After first expressing incredulous skepticism that the Pope placed the call (the Vatican later confirmed he did), Akin then justified it by saying the Pope could have simply invalidated the husband’s first marriage and radically sanated the couple’s existing marriage over the phone!

So much for a canonical trial to discover all of the facts of the marriage in order to make a proper legal judgment. By Akin’s analysis Church annulments are now like sweepstakes. All divorced and remarried Catholics can now write to the Pope, hoping their letter is specially selected by “Fr. Bergoglio” so they can win a free phone annulment.

But even more alarming is Akin’s subtle linguistic “escape hatch.” If you look closely, he repeatedly refers to the Church’s disallowing Holy Communion to those in a state of adultery as a “discipline” or a “practice.” So, although Akin is presently ready to fight tooth and nail to demonstrate there has been no official change, IF there should be a change later on, it would simply be a change to Church discipline or practice and not doctrine.

This is patently untrue. Christ’s own teaching on the indissolubility of marriage is absolute as is St. Paul’s teaching that it is a sacrilege to receive Communion in a state of mortal sin.

So what are we to think of all this? Putting some pieces of the puzzle together gives a pretty grim picture. Here is what we know. As Akin himself admits regarding Pope Francis:

He has acknowledged the problem in interviews and expressed his desire to help such people pastorally.

To illustrate one approach that has been tried, he mentioned the Easter non-Catholic practice of allowing second and third marriages, but without saying that the Catholic Church should or might adopt this practice.

He has called an Extraordinary Synod of Bishops for next year that will, in part, discuss the pastoral care of such persons.

In addition we know that:

In a March 5 interview, Francis praised Cardinal Kasper’s speech at the last consistory stating, “Cardinal Kasper made a beautiful and profound presentation…”

Cardinal Kasper’s presentation included the following proposal, as explained by Chris Ferrara: “Kasper proposes that since the annulment process is only a matter of ecclesiastical law, the Church could simply allow a local bishop to empower a priest “with spiritual and pastoral experience” or the diocesan penitentiary or episcopal vicar to make some sort of “pastoral” decision that the prior marriage in the Church ought not to impede reception of the Blessed Sacrament because it was probably invalid.”

Francis apparently referred to himself as “Fr. Bergoglio” in the phone call.

Now I in no way claim the gift of prophecy and do not intend to make a failsafe prediction. Nevertheless, I do see the following depressing scenario as a distinct possibility based on experience. Thus, I relate it here so if it does in fact happen, you can be prepared:

The synod will (I hope for all of our sake) reject Kasper’s more extreme proposal of allowing divorced and remarried Catholics to receive Communion after meeting a set of conditions, but with no annulment. To allow this would violate the teachings of Christ and St. Paul on marriage and the reception of Communion I mentioned earlier.

However, the synod may be open to Kasper’s other proposal, mentioned in the list above, as a compromise position. Especially since the Pope, as “Fr Bergolgio” basically put this position into practice during his phone call. By reducing himself to a mere priest, it seems Francis may have been sending a message that priests themselves should have the ability to adjudicate the validity of past marriages on a “pastoral” basis at the parish level. Thus the present legal process for annulments would be made obsolete or severely restricted.

If the synod approves this new process, the Pope will most likely follow the lead of Kasper’s presentation by filling the official document allowing it with language on the importance of marriage and its indissolubility. It will state unequivocally that Church doctrine on the issues of marriage and reception of Holy Communion has not changed. The document may also give "strict" requirements that all pastors and couples must meet to ensure this new “pastoral” annulment option is not "abused.” Thus, the technical letter of unchangeable Church law will remain on paper, yet be entirely gutted, trampled on, and made a moot point by the practice.

The practice will be annulment on demand and mean no Catholic marriage is safe from an arbitrary declaration of nullity by Fr. Joe. Yet the Neo-Catholic apologists will have their fig leaf. They will point to the "official document," referring to any imprudent pastoral annulments as "abuses" apparently on the level of liturgical abuse. And we all know how well the Neo-Catholics have been fighting liturgical “abuse.” The latest advice from Catholic Answers is to be quiet and suffer through it unless “…the priest is attempting to consecrate Snickerdoodles and Hawaiian Punch.”

Then, when the state of Catholic marriage descends even further into the depths than it already has the Neo-Catholics will dust off their "post hoc ergo propter hoc" argument and tell us (with a straight face) that Francis' new annulment policy is not at all the cause of the drastic decline. It's simply that the official document has been misunderstood by liberal priests and is being misinterpreted. The Synod document will have been "hijacked" by liberals! Now where have we heard that before?

In any case, please pray that none of what I just wrote comes true. But if it should, you heard it here first.

Published in Fetzen Fliegen
back to top
Last modified on Thursday, April 24, 2014
Tweet

More in this category: « Archbishop John Nienstedt--a man with many enemies--resigns Fear Not: It's All Part of the Great Facade »