A Rafter of Basting Turkeys 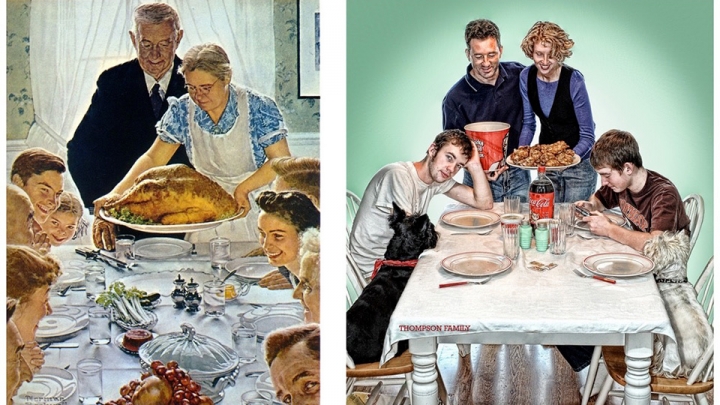 As you prepare to anchor around that Thanksgiving Day table don’t forget to throw a lifeline to the leftists of the family.

There is no denying that we all have them.

There’s Uncle Jack who still models those Woodstock tie-dyed tee-shirts and has that Che Guevara poster hanging in his garage, or Uncle Ed, now a fulfilled septuagenarian, who sports that unsightly rattail from under his baseball cap that he never removes. Then there’s Uncle Cosmo who refuses to relinquish that hazmat suit he wears to work, and his bride, Aunt Holly, who is never jolly except when she is showing off the ankle butterfly tattoo she got on her 60th birthday.

They are family and deep down you either loathe it or love it, and they are knocking at the front door, so what are you waiting on?

Since Hunter Biden’s paintings are valued in the hundreds of thousands, our Uncle Sam should provide each illegal immigrant one of Hunter’s masterpieces rather than any proposed tax dollars.

Eventually, this era of COVID will morph into just another issue we all must deal with like the winter weather, another season of the Detroit Lions failing to make the Super Bowl, and Aunt Nicole’s annually recycled fruit cake. Most likely unbeknownst to them is with all the shooting murders in Chicago, the city can actually boast how it remains the only urban center nationwide where COVID actually improved the mortality rate.

Restart normal this holiday season if you have not already.

Before that tryptophan coma sets in after such a grand feast, why not play some table trivia?

Why not suggest to Uncle Jack that since Hunter Biden’s paintings are valued in the hundreds of thousands, our Uncle Sam should provide each illegal immigrant one of Hunter’s masterpieces rather than any proposed tax dollars. Think of the resale value of such a move. Then again, Jack is in denial and always has been about how the Pilgrims had plenty of issues that resulted in near starvation until they figured out that their version of socialism was a first-rate disaster.

BLM has since vowed that there will be no more looting or rioting until all store shelves are restocked.

Make sure you remind Uncle Ed, who has not had an original idea since he changed hats and whose father and grandfather were lifelong Democrats, that our Democrat presidents of the past were always discernible by their initials: FDR, JFK, LBJ, and continues today with FJB.

Or prompt Aunt Holly, who loves to virtue signal with her BLM tag on her Facebook page, that the current supply chain shortage is affecting everyone including her comrades at BLM.  BLM has since vowed that there will be no more looting or rioting until all store shelves are restocked.

Why not tell the tale that when William Shatner returned back on earth from his recent space flight, how dozens of earthlings were waiting to wish him a happy 90th birthday, and his hair its 40th – just like Uncle Ed and plugs Biden.

To the younger brood around the table remind them that thanks to their public-school education, a Nazi is not anyone who disagrees with you on social media.  Provided the Democrats found out that the illegal aliens streaming across our border were going to vote Republican, a border wall would be finished within the week. Or how offensive language will cost you your job but abandoning Americans in Afghanistan will not. Make sure they understand that the oil spill that washed up on California beaches earlier this year was not the worst thing to happen to any beach. Rather, it was when Uncle Cosmo started showing up sporting his marble bag Speedo.

Then there was the plethora of speeches at the “Climate Summit,” where Biden fell asleep but was awakened when the delegates began to chant: “Wake Up Brandon.”

If that isn’t enough, remind the lot of them how ISIS is planning to attack Americans at shopping malls during the Christmas shopping season by offering Xboxes for $25, and then watch everyone trample each other to death trying to obtain one. Then there was the plethora of speeches at the “Climate Summit,” where Biden fell asleep but was awakened when the delegates began to chant: “Wake Up Brandon.” Or how Biden’s infrastructure bill will cost nothing and that the $1.2 trillion is strictly for shipping and handling.

Fifty may be the new 40 but after shopping for all that Thanksgiving fare it was quite evident that $50 is the new $100 when bagging groceries.

You cannot pick your family, but you can choose your one-liners, so feel free.

[Comment Guidelines - Click to view]
The Remnant values the comments and input of our visitors. It’s no secret, however, that trolls exist, and trolls can do a lot of damage to a brand. Therefore, our comments are heavily monitored 24/7 by Remnant moderators around the country.  They have been instructed to remove demeaning, hostile, needlessly combative, racist, Christophobic comments, and streams not related to the storyline. Multiple comments from one person under a story are also discouraged. Capitalized sentences or comments will be removed (Internet shouting).
The Remnant comments sections are not designed for frequent personal blogging, on-going debates or theological or other disputes between commenters. Please understand that we pay our writers to defend The Remnant’s editorial positions. We thus acknowledge no moral obligation whatsoever to allow anyone and everyone to try to undermine our editorial policy and create a general nuisance on our website.  Therefore, Remnant moderators reserve the right to edit or remove comments, and comments do not necessarily represent the views of The Remnant.
back to top
Last modified on Monday, November 22, 2021
Tweet

More in this category: « Education’s Woke Up Call APPEAL FOR AN ANTI-GLOBALIST ALLIANCE »