The Grinch Who Stole Tradition 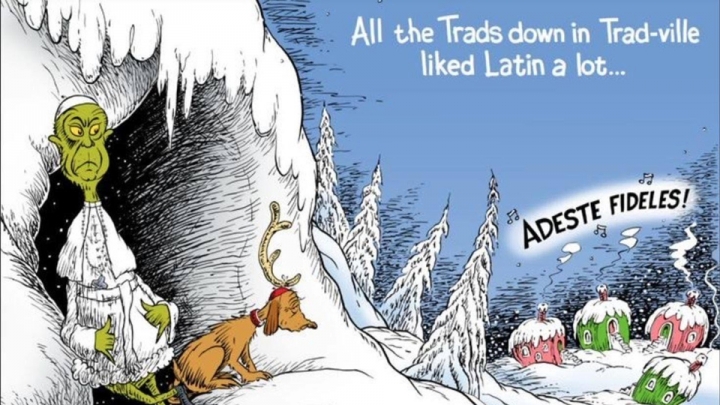 Every Trad down in Tradville loved the Old Mass a lot.

But the man in the papal apartment, Did NOT!

The Pope hated that Mass and all of Tradition!

“If they love Mass in Latin, they favor sedition!”

The pope paced back and forth, he couldn’t sleep through the night.

He thought of their chanting, it gave him a fright.

But I think what that Pope feared most of all.

Was the thought that his Council was going to fall. 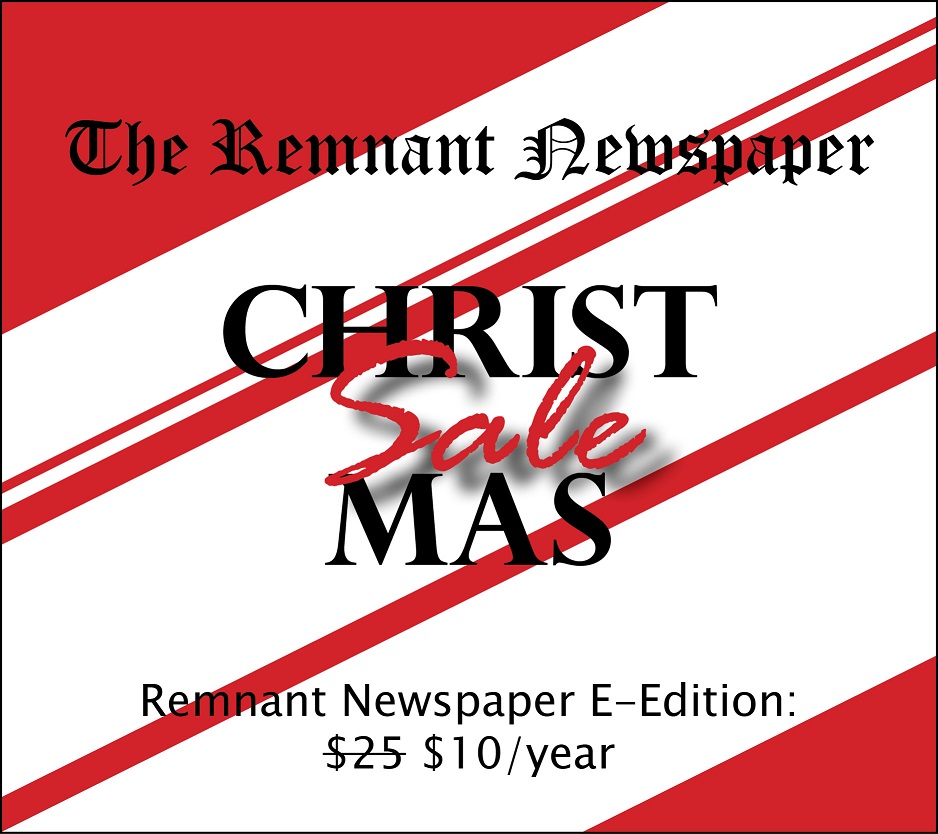 Whatever the reason, whether stubborn or mad.

He stood there in his living room, hating the Trads.

Reading the paper with a sick sour frown,

As he saw all his Mass numbers going straight down.

For he knew every Trad church in Tradville out there,

Was filled up with people, not one pew to spare.

"And they're saying their Latin!" he snarled with a sneer,

"Their canon is silent! They can’t even hear!”

Then he growled, with his arms now waving about.

"I MUST find some way to throw that Mass out!”

For in the future he knew, all those nice Traddy mothers.

Would bring up Traditional priests, nuns, and brothers!

They would sit around mocking both Teilhard and Nietzsche. 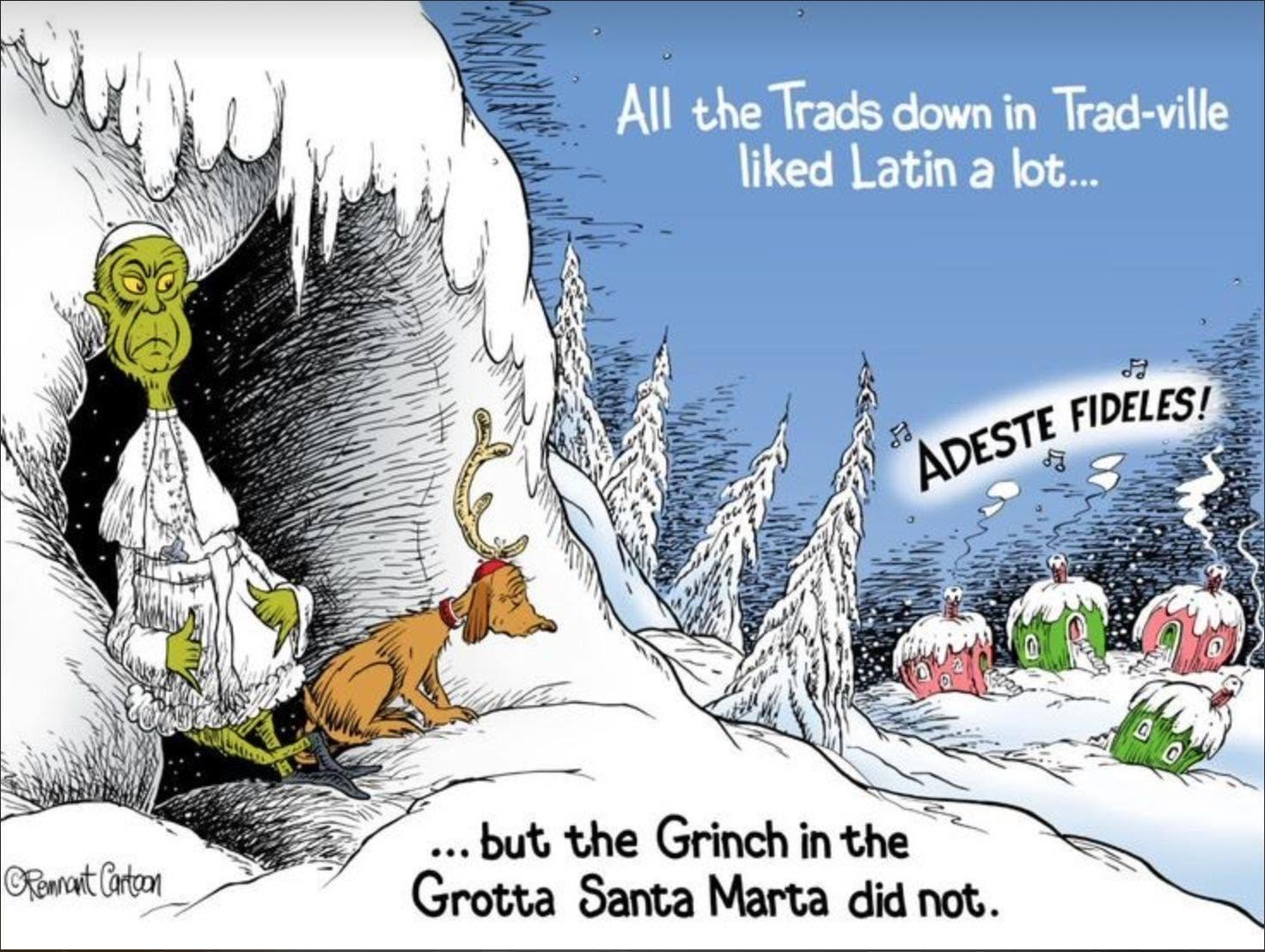 And THEN they’d do something He liked least of all!

Every Trad down in Tradville, the tall and the small,

Would seek to convert those in heresy and schism.

And the more the Pope heard the Trads praise Christ the King.

The more the Pope thought, "I must stop this whole thing!"

"Why, for eighty-five years I've put up with it now!"

"I MUST stop this Mass from existing! But HOW?"

Then he got an idea! An awful idea!

THE POPE GOT A WONDERFUL, AWFUL IDEA!

"I know just what to do!" The Pope laughed with a grin.

And he ordered his aide to fetch him his pen.

And he chuckled, and clucked, "What a great Papal trick!"

"With this wording, I’ll one up St. Pope Paul VI.”

"All I need is a pretext..." The Pope looked around.

But, since pretexts were scarce, there was none to be found.

Did that stop the old Pope? No! The Pope simply said,

"If I can't find a pretext, I'll make one instead!"

So he called Bishop Roche, then he asked for advice.

Roche told him those Trads are not very nice.

“They are all so rigid and divisive you see.

The Pope laughed and he marveled as he kept writing.

“Traditionis Custodes! How’s that for gaslighting?”

The Pope published his missive, it was sent far and wide.

When Massimo read it, he was so happy he cried.

Then the Pope turned the key to his electric car.

Driving down to Tradville where all the Trads are.

All their windows were dark. Quiet snow filled the air.

All the Trads were all dreaming sweet dreams without care.

When he came to the beautiful church on the square.

"This is stop number one," old Pope Francis hissed,

“A parish church? They will no longer  be needing this!”

Then he picked through their lock as he entered the nave.

All that he saw simply kept him amazed.

The Trad’s Saint statues all stood in a row.

"These statues," he grinned, "are the first things to go!"

Then he slithered and slunk, not having good manners.

And replaced all the statues with purple felt banners.

And he stuffed them in bags. Then he laughed with a cackle.

And moved to a closet their fine tabernacle.

Then he slunk to the altar as he looked with a frown.

Then he pushed it and pulled it, and turned it around!

He unplugged their organ so fast and so nimble.

And he left them guitars, some drums, and a cymbal!

He carried their treasures and started to whistle.

He even made off with their ‘62 missal.

He left them Bugnini’s which the Pope really loved.

When he heard a small sound like the coo of a dove.

He turned around fast, and he saw a small Trad.

Little Mary Beth Trad, who was dressed all in plaid.

The Pope had been caught much to his frustration,

By the girl who was there for late night adoration.

She stared at the Pope and said, "Pope Francis, why,”

"Why are you taking our Mass away? WHY?"

But, you know, that old Pope was so smart and so slick,

He thought up a lie, and he thought it up quick!

"Why, my sweet little tot, what’s all your confusion?

“Don’t you want to help search for ecclesial communion?”

“I’ll give you a new one made up by committee!”

And his fib fooled the child. Then he patted her head,

And he gave her a YOUCAT and sent her to bed.

And when Mary Beth Trad went to bed with her book,

HE went back in the church and took one last look.

Then he noticed the crèche and it caused him much trauma.

“I will take out Our Lady and leave Pachamama.”

As he walked to the door his eyes started to widen.

And he hung up a picture: himself and Joe Biden!

Then he did the same thing to the other Trad churches.

Even taking the sprinklers they used for asperges.

It was quarter past dawn... All the Trads still asleep.

All the Trads, still asnooze as he packed up his jeep.

Packed it up with their candles! Their hymnals! With glee…

He even packed up the star on top of their tree..

On his way to the theater to see “Luther’s Trumpet”

He rode with his load to the Tiber to dump it.

"Pooh Pooh to the Trads!" he was grinchishly humming.

"They're finding out now that their Mass is not coming!"

"They're just waking up! I know just what they'll do!"

"Their mouths will hang open a minute or two,

Then the Trads down in Tradville will all cry BooHoo!"

"That's a noise," grinned the Pope, "That I simply MUST hear!"

So he paused. And the Pope put his hand to his ear.

And he did hear a sound rising over the snow.

It started in low. Then it started to grow.

But the sound wasn't sad! Why, this sound sounded merry!

It couldn't be so! But it WAS merry! VERY!

He stared down at Tradville! The Pope popped his eyes!

Then he shook! What he saw was a shocking surprise!

Every Trad down in Tradville, the tall and the small,

Was singing at Mass! Without churches at all!

He HADN'T stopped that Mass from coming! IT CAME!

Somehow or other, it came just the same!

And the Pope, with his grinch-feet ice-cold in the snow,

Stood puzzling and puzzling: "How could it be so?"

"The Trads at their old Mass outside in the cold!?”

And he puzzled three hours, till his puzzler was sore.

Then the Pope thought of something he hadn't before!

"Maybe Tradition," he thought, "isn’t formed by a board."

"Maybe Tradition...perhaps...was passed down by Our Lord.”

And what happened then? Well...in Tradville they say,

That the Pope’s conciliar heart grew three sizes that day!

And the minute his heart didn't feel quite so tight,

He whizzed with his load through the bright morning light,

And his heart filled with joy as he stepped on the gas!

And he, HE HIMSELF! The Pope, gladly said the old Mass.

[Comment Guidelines - Click to view]
The Remnant values the comments and input of our visitors. It’s no secret, however, that trolls exist, and trolls can do a lot of damage to a brand. Therefore, our comments are heavily monitored 24/7 by Remnant moderators around the country.  They have been instructed to remove demeaning, hostile, needlessly combative, racist, Christophobic comments, and streams not related to the storyline. Multiple comments from one person under a story are also discouraged. Capitalized sentences or comments will be removed (Internet shouting).
The Remnant comments sections are not designed for frequent personal blogging, on-going debates or theological or other disputes between commenters. Please understand that we pay our writers to defend The Remnant’s editorial positions. We thus acknowledge no moral obligation whatsoever to allow anyone and everyone to try to undermine our editorial policy and create a general nuisance on our website.  Therefore, Remnant moderators reserve the right to edit or remove comments, and comments do not necessarily represent the views of The Remnant.
back to top
Last modified on Sunday, December 19, 2021
Tweet