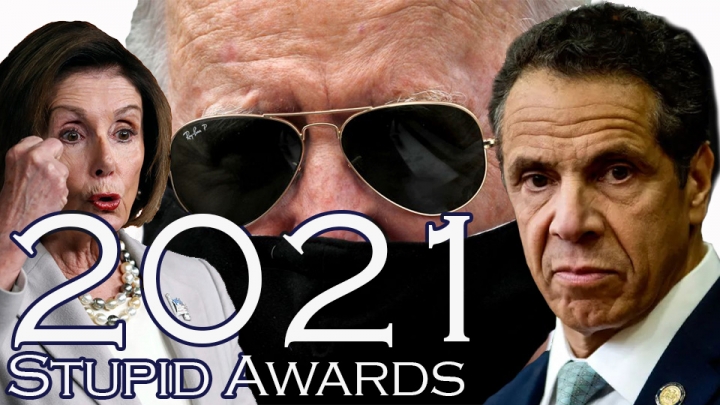 Countercultural moment: When the Fiji men’s rugby team won gold at the Olympics, they got on their knees prayed and then sang a hymn in thanksgiving to God.

Oxymoron: The Webb telescope launched on Christmas has NASA anticipating it to reveal a “quantum leap of understanding of who we are, how we got here, what we are, and how did it all evolve.” This is exactly what Christmas discloses to Christians.

Bamboozlement for the ages: It took four presidents trillions of dollars over 20 years to replace the Taliban with the Taliban.

Ten out of every six folks bemoan voting for Biden.

Most telling poll: Ten out of every six folks bemoan voting for Biden.

Biography of the year: Jason Riley’s, “Maverick: A Biography of Thomas Sowell.”  If you are not familiar with the esteemed 91-year-old Sowell, make it a New Year’s resolution.

Facts and Stats: “Facing Reality: Two Truths About Race in America” by Charles Murray. “American Whites, Blacks, Latinos, and Asians, as groups, have different means and distributions of cognitive abilities.” Murray tackles an ideological and emotional topic head-on that is data-driven. Murray underscores how Asians, Whites, Latinos, and Blacks have different rates of violent crime that parallel academic achievement.  The book is a must-read for those hypnotized by the Critical Race Theory crowd.

Next federal holiday: August 4. Provided you don’t know, well, you are racist.

Most telling: During the fighting in Gaza, an Arab woman brought her wounded son to an Israeli hospital where Jewish doctors saved him.  When asked what kind of future she saw for him, she countered: “I hope he will be a martyr.”

Next federal holiday: August 4. Provided you don’t know, well, you are racist.

Rename: Despite a more than 100% spike in homicides, the city of Minneapolis is renaming a part of the city George Floyd Square. Why not rename the city: Floydopolis.

Best marketing: Krispy Kreme handed out a daily free donut for those who were COVID vaccinated in a country where more than half the people are obese.

Latest Superhero: Black Superman: Where any Kardashian rather than Kryptonite is his undoing.

Donkey retro: Democrats brought back the 1918 pandemic, the 1968 race riots and the 1973 gas lines within the same year.

Leftism’s Man of the Year:  George Floyd spent his life cultivating a criminal rap sheet where he once held a loaded gun against the stomach of a pregnant woman. Nancy Pelosi eulogized Floyd saying, “Thank you, George Floyd, for sacrificing your life for justice. Your name will always be synonymous with justice.”  Floyd’s name will be synonymous with justice like Benedict Arnold’s name is tantamount with patriotism.

Tasteless joke award: New Scientist reports a woman in Pennsylvania can drink water and urinate alcohol due to yeast in her bladder. It is called “Bladder Fermentation Syndrome.” New Scientist could be sued for either revealing the formula for Coors Light or exposing the production process for Busch Beer.

Donkey retro: Democrats brought back the 1918 pandemic, the 1968 race riots and the 1973 gas lines within the same year.

2022 Nobel forecast: Biden will collect the Nobel Peace Prize. When he takes the stage in Stockholm, he will thank the members of the Motion Picture Academy for his Oscar.

2022 Prediction the good and the bad: The Supreme Court will rule there is no constitutional right to abortion sending Roe v. Wade to history’s dustbin. While a major stock market correction is coming to a brokerage account near you.

[Comment Guidelines - Click to view]
The Remnant values the comments and input of our visitors. It’s no secret, however, that trolls exist, and trolls can do a lot of damage to a brand. Therefore, our comments are heavily monitored 24/7 by Remnant moderators around the country.  They have been instructed to remove demeaning, hostile, needlessly combative, racist, Christophobic comments, and streams not related to the storyline. Multiple comments from one person under a story are also discouraged. Capitalized sentences or comments will be removed (Internet shouting).
The Remnant comments sections are not designed for frequent personal blogging, on-going debates or theological or other disputes between commenters. Please understand that we pay our writers to defend The Remnant’s editorial positions. We thus acknowledge no moral obligation whatsoever to allow anyone and everyone to try to undermine our editorial policy and create a general nuisance on our website.  Therefore, Remnant moderators reserve the right to edit or remove comments, and comments do not necessarily represent the views of The Remnant.
back to top
Last modified on Friday, January 7, 2022
Tweet

More in this category: « TRADITIONIS CUSTODES: What We Can Learn from English Catholic Resistance Catholic Priest Stands With Bishop Schneider on Vaccines »