Why it is Licit to Resist Traditionis Custodes 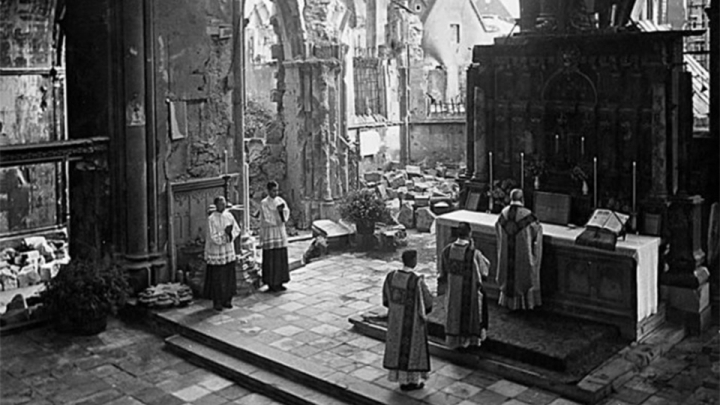 Attached is a letter I wrote to a diocesan priest who offers the Traditional Latin Mass. His parish is seeking consultation about how to proceed, given Traditionis Custodes. I am releasing this letter to the public to help faithful clergy who desire to say the Tridentine Mass, but are worried about disobeying Pope Francis. Names and locations are withheld to respect the privacy of those involved:

Greetings, and a most joyous Feast of the Epiphany. My name is Dean Barker. I come from (withheld) to the traditional mass at (withheld) every now and then, and will hopefully be able to start coming more regularly to weekday masses. I would like to thank you for giving the laity an opportunity to voice our concerns about Traditionis Custodes. Since I will not be able to attend the meeting, I would like to provide information which makes a very strong canonical case that it would be licit not to follow this motu proprio. Since this is being done via email, rather than in person, I will include a much more in-depth explanation, so that this can be used by diocesan clergy and His Excellency in making an educated decision moving forward. I understand that you might not be able to include all of this in your report, so feel free to choose whatever you feel is most pertinent.

In the accompanying letter of Traditionis Custodes, Pope Francis says that "those who are rooted in the previous form of celebration... need to return in due time to the Roman Rite promulgated by Saints Paul VI and John Paul II.” Thus, he establishes that his goal is to get rid of the Roman Missal prior to the Second Vatican Council. He also claims that he has abrogated this missal, where in the tenth paragraph, he mentions that “St. Pius V also abrogated all the rites that could not claim a proven antiquity…”

Quite ironically, the goal of Pope St. Pius V in issuing Quo Primum was to institute the Tridentine Mass throughout the Church, so to use it to justify a grave restriction of that mass is rather odd. The saintly pontiff’s decree forever granted all Roman Catholic priests the right to say the Traditional Latin Mass: "Furthermore, by these presents [this law], in virtue of Our Apostolic authority, We grant and concede in perpetuity that, for the chanting or reading of the Mass in any church whatsoever, this Missal is hereafter to be followed absolutely, without any scruple of conscience or fear of incurring any penalty, judgment, or censure, and may freely and lawfully be used. Nor are superiors, administrators, canons, chaplains, and other secular priests, or religious, of whatever title designated, obliged to celebrate the Mass otherwise than as enjoined by Us. We likewise declare and ordain that no one whosoever is forced or coerced to alter this Missal, and that this present document cannot be revoked or modified, but remain always valid and retain its full force…”

It should be clear that, given verbiage such as “in virtue of Our Apostolic authority,” “in perpetuity,” and “cannot be revoked or modified, but remain always valid,” this document, while not dogmatic, nonetheless holds more authority than the average papal mandate. This authority is once again confirmed with the decree’s most stern conclusion: “Therefore, no one whosoever is permitted to alter this notice of Our permission, statute, ordinance, command, precept, grant, indult, declaration, will, decree, and prohibition. Would anyone, however, presume to commit such an act, he should know that he will incur the wrath of Almighty God and of the Blessed Apostles Peter and Paul.” I mention this not to scare anyone, but rather to show that this document, of unique authority, is being directly violated by Pope Francis, since his goal is clearly to abrogate the TLM. In less terrifying words, he can’t do what he’s doing.

As a side note, much has been made of how this motu proprio also contradicts Summorum Pontificum, the motu proprio by which Pope Benedict XVI confirmed the universal right of Roman Catholic priests to say the Traditional Latin Mass. While stating that the TLM was “never juridically abrogated,” the former pope went on to explain that it could not be abrogated: "What earlier generations held as sacred, remains sacred and great for us too, and it cannot be all of a sudden entirely forbidden or even considered harmful.” Thus, two popes have established that the TLM can never be abrogated. There is also Canon 13 of Session 7 of the Council of Trent, which says "If anyone says that the received and approved rites of the Catholic Church (which includes the TLM - writer’s note), accustomed to be used in the administration of the sacraments, may be despised or omitted by the ministers without sin and at their pleasure, or may be changed by any pastor of the churches to other new ones, let him be anathema.”

Given all this information, the Catholic priest is faced with a serious dilemma: either submit to the unjust and illegal decree of the pope to appear obedient, or continue to offer the Mass of All Time and risk censure, even though Quo Primum decrees the old missal is “to be followed absolutely, without any scruple of conscience or fear of incurring any penalty, judgment, or censure, and may freely and lawfully be used.” Some priests might even agree that the motu proprio and accompanying dubia are unjust, but feel stuck. The pope is the pope; how can I disobey him and still claim to be Catholic?

The desire to please the pope is a Catholic attitude, but we must understand that the authority of the pope is not absolute; there are times when it is lawful, and even necessary, to disobey the pope. St. Robert Bellarmine, a doctor of the Church, teaches in his book De Romano Pontifice that "it is also licit to resist the one (a pope) who aggresses the souls or who disturbs civil order, or, above all, who attempts to destroy the Church. I say that it is licit to resist him by not doing what he orders and preventing his will from being executed...” Therefore, since Pope Francis wishes to deprive souls of the TLM, it is lawful for a priest to resist this motu proprio and say the old mass as he was doing before. Nobody is obliged to follow an order which incurs the wrath of Almighty God!

Not only is the new motu proprio illicit, but it is quite possibly a canonically invalid document. We have already seen that the stated goal of the pope in Traditionis Custodes is to remove the TLM from the Catholic Church. Canon 38 says "An administrative act, even if it is a rescript given motu proprio, lacks effect insofar as it injures the acquired right of another or is contrary to a law or approved custom, unless the competent authority has expressly added a derogating clause.”

The key distinction with Quo Primum is that it clearly forbids any future acts which would overturn it, and it says it can never be abrogated, and no authority has ever denied the validity of the eternal clauses from St. Pius V. So even if Traditionis Custodes has a derogating clause, there is positive doubt about the validity of such a clause. A pope can bind his successors in matters of faith and morals, and the rite of mass is most certainly a matter of faith; lex orandi, lex credendi, meaning the law of prayer is the law of belief. Therefore, considering the probable invalidity of the motu proprio, one is not bound to obey it, and should even ignore it.

While the restrictions on the mass itself are clearly to be resisted, would it be prudent to submit to the other dictates of Traditionis Custodes and the dubia which do not directly help remove the TLM from existence, such as the bulletin restrictions, no traditional confessions, vernacular readings only, etc.? I would respond in the negative. All of these dictates are being put in place with the goal of eradicating the Traditional Latin Mass from Catholicism, which makes the whole thing invalid. We cannot pick and choose more tolerable bits of an unjust and/or invalid document; it must be rejected entirely until it is formally fixed. Canon 28 of the Council of Chalcedon (451) attacked Roman primacy, and therefore none of the other canons could be followed until canon 28 was removed and the whole council was ratified. Likewise, other parts of this motu proprio cannot be followed as long as the intent to disobey Quo Primum remains; following parts legitimizes the whole.

I hope this letter will be of help for you and the parish in this difficult time in our Church’s history. To be clear, I am just a layman, and perhaps some of what I put here is incorrect (which is why I included links to sources), but I earnestly pray that this will aid you in your quest to maintain the Traditional Latin Mass. I hope the meeting goes well, as I was very disappointed that I could not make it. May Our Lady watch over us in this, our time of greatest need!

May God Bless you,

[Comment Guidelines - Click to view]
The Remnant values the comments and input of our visitors. It’s no secret, however, that trolls exist, and trolls can do a lot of damage to a brand. Therefore, our comments are heavily monitored 24/7 by Remnant moderators around the country.  They have been instructed to remove demeaning, hostile, needlessly combative, racist, Christophobic comments, and streams not related to the storyline. Multiple comments from one person under a story are also discouraged. Capitalized sentences or comments will be removed (Internet shouting).
The Remnant comments sections are not designed for frequent personal blogging, on-going debates or theological or other disputes between commenters. Please understand that we pay our writers to defend The Remnant’s editorial positions. We thus acknowledge no moral obligation whatsoever to allow anyone and everyone to try to undermine our editorial policy and create a general nuisance on our website.  Therefore, Remnant moderators reserve the right to edit or remove comments, and comments do not necessarily represent the views of The Remnant.
back to top
Last modified on Monday, January 17, 2022
Tweet
More in this category: « Catholic Priest Stands With Bishop Schneider on Vaccines Why We Can't Skip Ember Days »