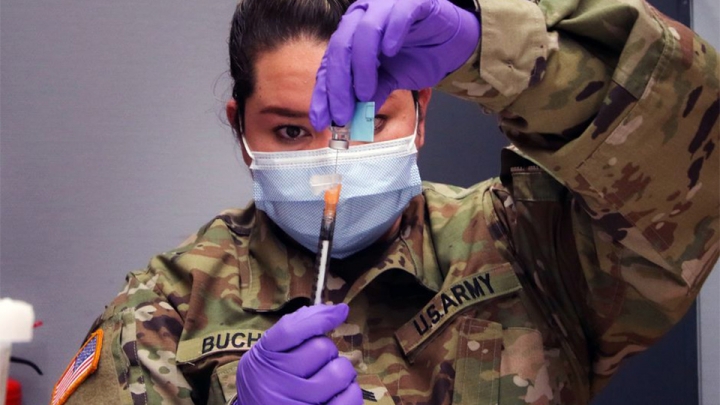 Not one branch of the U.S. military has approved any religious exemptions regarding the COVID jab. As a result, hundreds have already been discharged with plenty more on deck.

The COVID jab mandate went into effect on November 28, 2021 and has been struck down by a number of federal courts. The most recent being the Supreme Court’s decision not to make private employers force the jab upon their employees ruling OSHA was out of bounds pushing forward with such an unconstitutional mandate.

In a lawsuit filed by the First Liberty Institute for Christian Navy SEALS, a federal judge issued a preliminary injunction against the Biden administration’s refusal to grant religious exemptions.

Despite the injunction, a Navy commander was reassigned “for loss of confidence in his abilities to perform his duties.” In other words, his career is all but officially over. The commander highlighted the Navy’s convoluted procedure for exemption.

Some troops believe the refusal of all religious exemptions is nothing but “a political purge” forcing out the military’s “best and brightest over beliefs protected by the Constitution’s First Amendment.”

The judge who issued the initial injunction quoted from the commander’s submission: “The Navy has proven incapable of policing itself. Therefore, I am requesting your involvement to ensure the free exercise of religion in the Navy, and throughout the military.” He continued:

“Please demand accountability of our senior naval leaders for their unlawful actions and join in the call for an immediate end to religious discrimination in our military. The defense of our nation requires that service members are free to serve without fear of discrimination or retaliation for faithfully adhering to the dictates of their conscience.”

Fox News reported some troops believe the refusal of all religious exemptions is nothing but “a political purge” forcing out the military’s “best and brightest over beliefs protected by the Constitution’s First Amendment.”

One major with 17 years of service anonymously expressed to Fox News: “There’s something fundamentally wrong with our nation’s leadership. We are facing an unconstitutional edict that I think is very targeted as a political purge, taking out some of the best and brightest soldiers, sailors, airmen, Marines, and guardians from the Space Force.”

These mandates are an ideal way to thin the military herd of conservatives and independents by ending resistance within the ranks of potential enforcers.

The major is by no means a sole voice sounding off on the military’s dishonest enforcement of the jab and its effects on readiness.

Army veteran and Arkansas Sen. Tom Cotton tweeted: “Kicking thousands of young, healthy troops out of the military over the vaccine mandate hurts our national security.” Texas Sen. Ted Cruz followed: “President Biden is wrong for punishing our servicemembers over their religious freedom. I am pleased to see a judge issued a stay against Biden’s authoritarian vaccine mandate.”

Florida Rep. Brian Mast wrote Marine Corps Commandant Gen. David Berger: “On top of the unconstitutionality of President Biden’s vaccine mandate, this has serious implications for our force readiness. “Separating hundreds – and potentially thousands – of Marines for exercising their rights can put the United States at a huge military disadvantage.”

These mandates are an ideal way to thin the military herd of conservatives and independents by ending resistance within the ranks of potential enforcers. Many commissioned officers left the military during the Obama administration resulting in Austin, Milley and the Berger’s of the general and flag officer corps.

Our military is devolving into more a of social experiment than a fighting force where winning the culture war is priority one.

The military remains the last bastion that the left has not turned into a bureaucratic echo chamber. They are, however, working overtime to make that a reality.

Why are our troops not able to exercise the very freedoms they deploy to protect? Why should anyone risk their lives for a country that discards their faith? These ineffective and irrational mandates have done great harm to millions. Now it is destroying our military piecemeal while endangering the nation as it corrodes our military readiness.

Our military is devolving into more a of social experiment than a fighting force where winning the culture war is priority one.

The left understands their agenda will not succeed until Christians are marginalized.

Not only is religious freedom first in the Bill of Rights but is the freedom that all others are contingent upon. The free exercise of religion is central to and protected by the First Amendment reflecting the calling owed to God, not government.

The left understands their agenda will not succeed until Christians are marginalized.

Provided we collectively fail to defend our fundamental freedoms, we shall lose all of them – no exceptions.

[Comment Guidelines - Click to view]
The Remnant values the comments and input of our visitors. It’s no secret, however, that trolls exist, and trolls can do a lot of damage to a brand. Therefore, our comments are heavily monitored 24/7 by Remnant moderators around the country.  They have been instructed to remove demeaning, hostile, needlessly combative, racist, Christophobic comments, and streams not related to the storyline. Multiple comments from one person under a story are also discouraged. Capitalized sentences or comments will be removed (Internet shouting).
The Remnant comments sections are not designed for frequent personal blogging, on-going debates or theological or other disputes between commenters. Please understand that we pay our writers to defend The Remnant’s editorial positions. We thus acknowledge no moral obligation whatsoever to allow anyone and everyone to try to undermine our editorial policy and create a general nuisance on our website.  Therefore, Remnant moderators reserve the right to edit or remove comments, and comments do not necessarily represent the views of The Remnant.
back to top
Last modified on Monday, January 24, 2022
Tweet

More in this category: « Vatican II in Light of Tradition? Trent’s Tradition Excommunicated by Modernism at Vatican Council II »