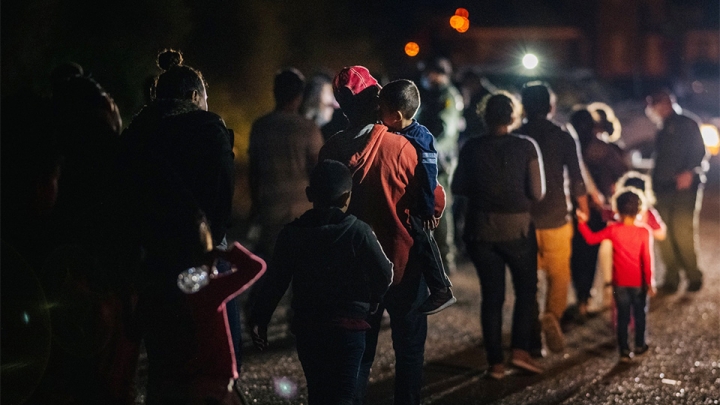 PHOENIX — Ten years ago it already was considered too dangerous for the Border Patrol to venture out at night into some territory in the Vekol Valley, a half-hour drive south of metropolitan Phoenix. This wasn't territory right on the border, but about a two-hour drive north of the border-straddling city of Nogales. The chaos was coming home to us.

The cartels reportedly had more than 100 lookouts on Vekol Valley mountains to direct drug smugglers away from law enforcement.

I visited the Vekol Valley back then, just an hour's drive south of my own Arizona home. Simply turn off I-8 for a few minutes and here amid the scraggly bushes were discarded clothes and carpeted booties, used to minimize footprints, scattered around by illegal aliens as they prepared for the next step of their arranged vehicular journey.

The invasion had come well beyond the border, thanks to complicit bipartisan politicians.

In the distance you could see a high-rise hotel in the town of Casa Grande, Ariz. The invasion had come well beyond the border, thanks to complicit bipartisan politicians who never would tolerate invaders pushing their way into their own cozy living rooms and parlors.

I'm no gun fan, but back then I bought a shotgun after a Phoenix police officer on patrol in his SUV stopped to talk as I pulled weeds in the alley behind my home. He didn't finger any particular suspects, but he mentioned influences that were moving northward in town.

One can only imagine what has happened by 2022, with open-borders bad-Catholic Joe Biden not only welcoming unlimited illegal immigration but even transporting unvetted border-jumpers on secret nighttime flights into U.S. cities thousands of miles away. The flights are treated as hush-hush as if the White House has a secret pedestrian tunnel straight to Beijing. Or at least Hunter Biden does.

Don't want to rouse up any middle-class U.S. peasants seeing their nation being destroyed direct from the White House?

When the barbarians sacked Rome, did the Roman government transport them in on chariots and camels to ease the vandals' task?

The cartels reportedly control both sides of the border, not only the Mexican one.

When the barbarians sacked Rome, did the Roman government transport them in on chariots and camels to ease the vandals' task? Would Biden's bureaucrats object more strenuously to the comparison with vandals than with Biden's blatantly violating the entirety of U.S. immigration law to serve his hyper-partisan purposes? Having seen what Democrat mischief-makers did to the 2020 election, one can only imagine what they're plotting with all these surreptitiously transported newcomers in order to hold onto power in November 2022.

I went down to the border in southeastern Arizona on some organized trips in the pre-Trump era to see what was being passed off as border protection. With the San Pedro River nearby and Mexican mountains in the background beyond Hereford, Ariz., there were some impressive 18-foot-high, vertical metal slats -- which simply came to an end where a scraggly four-strand barbed-wire "fence" began.

We're told there's a rule of law, but the law has a strange way of exploding into surprises when it becomes misaligned with what the powerful want. Democrats claim there's a threat to democracy now, but the fight against what Americans want is a "progressives'" specialty.

But if someone like Donald Trump ever seriously challenges this mummery, hell hath no fury like the political establishment and dominant media.

After the fledgling pro-life movement began to score important victories in the early 1970s after initially being taken aback by pro-abortion radicals, the Supreme Court in January 1973 jumped in to declare a hitherto-unknown basic national right to permissive abortion. After dozens of states' voters rejected "same-sex marriage," the high court in 2015 miraculously discovered, 5-4, another previously unknown constitutional right that conformed to what the elite recently took a liking to.

On marriage, just one Supreme Court justice made the difference between thousands of years of tradition, culture, religion and social arrangement, versus what the trendies demanded to please themselves for the moment.

Border sovereignty is a basic historic concept. Many wars have been fought over it — indeed, Biden currently offers that as a rationale to defend Ukraine against Russia — but U.S. border security long has been regarded from the Olympian heights as a quaint superstition to be ground into powder whenever possible.

As long as we accept the pretense of progressives' overwhelming legitimacy, we're allowed to sip our little cups of tea and obey orders. But if someone like Donald Trump ever seriously challenges this mummery, hell hath no fury like the political establishment and dominant media.

One of the chartered bus trips to the border that I joined up with in 2012 had two heavy topics on riders' minds at the same time, and both of them showed what a fiction "democracy" had become.

A few years ago, the federal government one day simply dropped illegal aliens without resources off on a street about a mile from my current residence, to make do as they could.

It was the end of June 2012. Phoenix-area residents headed southeast to the international line pondered why in the world had Chief Justice John Roberts joined four liberals on the Supreme Court on June 28 to save Obamacare, which had been narrowly approved in Congress amid great controversy in 2010.

When President Barack Obama's mandatory government medical plan had been argued before the high court, opponents were hopeful. The government certainly had no right to order people to buy something.

However, Roberts jumped in to play word-twister and declare that Obamacare was a tax, which Congress had every right to impose, even though Obama and his supporters had declared it wasn't a tax but a fee for services.

Once again big government got what it wanted. Just as it had for years in keeping the U.S. border as porous as possible.

As it happened, the Arizonans on the buses had another recent Supreme Court slap in the face to chew over. On June 25, 2012, majority justices voted against three of the four provisions of Arizona's SB 1070, which the Grand Canyon State's legislature approved in 2010, concerned about lax border security. The Catholic Chief Justice Roberts again was in the majority with justices empowering the establishment. The vote was 5-3 because Associate Justice Elena Kagan recused herself.

Last summer, as Biden's wide arms welcomed countless unauthorized entrants into other people's neighborhoods — but certainly not into his own ill-gotten mansions — his government started depositing them, among various locations, into the little desert town of Gila Bend, Ariz.

SB 1070 had gotten an extra boost toward passage at the copper-domed state capitol in Phoenix after a prominent southeastern Arizona rancher and Catholic, Rob Krentz, was discovered murdered as he drove around his Cochise County ranch with his dog, which also was killed, in 2010. An illegal alien was suspected in the attack but never caught. Trackers managed to follow footprints southward. Cochise County is on the border with Mexico and is trod underfoot by drug smugglers and other lawbreakers.

There was no need for more border enforcement here?

A few years ago, the federal government one day simply dropped illegal aliens without resources off on a street about a mile from my current residence, to make do as they could. It already made a practice of depositing their compadres at the main Phoenix bus station, near the main Phoenix airport.

Last summer, as Biden's wide arms welcomed countless unauthorized entrants into other people's neighborhoods — but certainly not into his own ill-gotten mansions — his government started depositing them, among various locations, into the little desert town of Gila Bend, Ariz., which has only about 2,000 residents, along the road from Phoenix to San Diego.

Gila Bend had no place for this influx, so of course it began motoring them into the vast metropolitan area of Phoenix, whose establishment-blessed liberal Democrat mayor was less likely to feel overburdened by their presence, as long as they stayed out of her own residence, of course.

Typical of Biden's lackluster presidency. If he had wanted crowds, he could have found millions of them a few hours' drive away, besieging the border.

"Even a few short years ago, it would have been unimaginable that the government would allow, and even encourage, millions of foreigners to enter our nation without following the rules, without being vetted, and very possibly without good intentions. Powerful corporations and politicians have turned illegal immigration into an art form, and we are supposed to just nod and go along."

Miele may have forgotten how long this has been encouraged, but is correct about the arrogant assumptions empowering it.

An open-borders Republican lady named Martha McSally lost not one but both of those seats to Democrats. First, to Kyrsten Sinema, then to Mark Kelly.

Here's how. Establishment powerbrokers decided that GOP Rep. McSally, representing a more-liberal southern Arizona congressional district, was the "winner". They needed to keep unpopular U.S. Sen. Jeff Flake's seat in Republican hands. Flake had decided one six-year term in the upper chamber was all he could stand and wouldn't run for re-election.

Conservative Republican activist and former Arizona state Sen. Kelli Ward already was in the race for Flake's seat, but the establishment finally pulled the reluctant McSally onboard and maneuvered her to a primary victory. On the Democratic side for the general election, Sinema outhustled McSally and was declared the Senate winner after a nearly week-long ballot count in November 2018.

Kyl stepped down after only a few months, allowing the governor to make loser McSally, who couldn't hold on to Flake's seat for the GOP, an incumbent senator after all. But when that seat came before the voters in 2020, she lost to Democrat challenger Mark Kelly, giving McSally a record of failing in the races for both of the state's upper chamber spots in two years.

Biden hasn't seen fit to thank McSally by bestowing a job for her ineffectual politics benefitting his party. However, "Catholic Joe" rewarded both Jeff Flake and McCain widow Cindy with ambassadorships after they, as Republicans, endorsed his presidential candidacy during a Phoenix event for the 2020 campaign.

Phoenix viewers may remember the puzzled television reporter out on the street pointing out that a major endorsement was going on inside a museum but it attracted no neck-craners to watch it.

Typical of Biden's lackluster presidency. If he had wanted crowds, he could have found millions of them a few hours' drive away, besieging the border.

[Comment Guidelines - Click to view]
The Remnant values the comments and input of our visitors. It’s no secret, however, that trolls exist, and trolls can do a lot of damage to a brand. Therefore, our comments are heavily monitored 24/7 by Remnant moderators around the country.  They have been instructed to remove demeaning, hostile, needlessly combative, racist, Christophobic comments, and streams not related to the storyline. Multiple comments from one person under a story are also discouraged. Capitalized sentences or comments will be removed (Internet shouting).
The Remnant comments sections are not designed for frequent personal blogging, on-going debates or theological or other disputes between commenters. Please understand that we pay our writers to defend The Remnant’s editorial positions. We thus acknowledge no moral obligation whatsoever to allow anyone and everyone to try to undermine our editorial policy and create a general nuisance on our website.  Therefore, Remnant moderators reserve the right to edit or remove comments, and comments do not necessarily represent the views of The Remnant.
back to top
Last modified on Friday, February 4, 2022
Tweet
More in this category: « Biden’s Briar Patch FREE CATHOLIC ITALY: An Appeal for International Cooperation from the Old World »