Further inconsistencies in the Pell-Becciu Affair 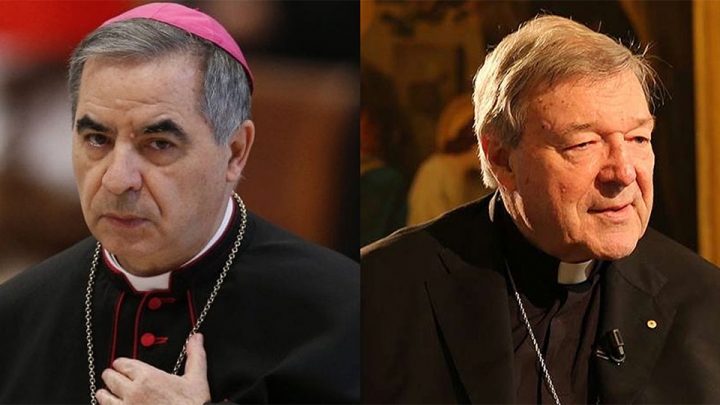 In a story that has more red-herrings than a Poirot novel, the drawn-out saga of Cardinal Becciu’s alleged financial improprieties and their possible influence on the case against Cardinal George Pell recently took another turn.

On April 9th, an Italian news outlet stated that new evidence explains the real reason for secret transfers of over AUS $2 million from the Vatican to Australia around the time of Cardinal Pell’s trial. This development apparently disproves the existing theories about the mysterious transfers, which have perturbed Vaticanistas and Pell-supporters for years.

Writers at Italy’s The Daily Compass claim[1] that the money was sent from the Vatican to the Melbourne office of IT company, Neustar, for the purpose of securing the Top Level Domain name “.catholic”. According to the article, the former Secretary General of the Australian Catholic Bishops Conference, Fr Brian Lucas, wrote to the Pontifical Council for Social Communications in March 2012, asking that it acquire the domain.

The Australian Catholic Bishops Conference was asked to confirm or deny the claim that the secret payments were related to the domain name.

Before looking more closely at this new development, it must be pointed out that the Catholic  Daily Compass is not particularly Pell-friendly, but does seem to be rather Becciu-friendly. This may be of no import, but is something to keep in mind as this particular outlet is the only one reporting what should have been a rather significant update. Other prominent Italian news outlets such as La Repubblica, Corriere Della Serra and L'Avvenire, all of which have taken great interest in the misappropriation of Vatican funds and which continue to report regularly on the trial of Becciu and his part in the Sloane investment scandal, have made no mention of Fr. Lucas and the “.catholic” hypothesis.

One reason for this could be that The Daily Compass story is a rather sloppy piece of reporting which does little to help Becciu’s cause. Details from the article can easily be checked at the website of ICANN, the Internet Corporation for Assigned Names and Numbers, so the truth can be sorted from fantasy.

ICANN regulates internet domain names internationally and one part of its role is to register top level domains: these are the letters such as “.com” or “.net” found at the end of a web address. When a top level domain is not limited to a specific country, it is known as a generic top level domain, or gTLD. “.catholic”, the domain pertinent to our inquiry, is an example of a gTLD.

When the controversial money transfers became known in 2020 via an Italian news article, it was speculated that they were somehow involved in framing Cardinal Pell on charges of child sexual abuse.

Around ten years ago, ICANN introduced a new system for regulating gTLDs and internet operators had to apply or reapply for the gTLD of their choice. In order to strengthen their applications, operators were invited to solicit endorsements from within their communities, and this is where the Australian Catholic Bishops Conference comes into the picture.

The Secretary of the ACBC at that time, Fr Brian Lucas, was one of the “community members” who wrote to the Pontifical Council for Communications in March 2012 to endorse the latter’s application for the gTLD “.catholic.” The Bishops Conferences of the United States and Italy wrote similar endorsements. The three letters were almost identical in form, suggesting that the model came straight from the Pontifical Council’s legal team; all of the documents can be found at the ICANN website.[2]

Also available from ICANN are two letters from the same month from Archbishop Peter Wells, Assessor for General Affairs of the Secretariat of State, authorizing the Pontifical Council for Social Communications to apply for the generic top level domain “.catholic” in two languages. The almost verbatim letters assured the Council of financial and logistical support from The Secretariat of State, the office of the Administration of the Patrimony of the Apostolic See (APSA) and the Prefecture for Economic Affairs of the Holy See.

In reality, we are no closer to knowing the truth.

The application was successful and the Holy See was granted use of the generic domain “.catholic” by ICANN in October 2015. At that time, the company responsible for registering and administering the domain was ARI Registry Services, a subsidiary of Bombora Technologies. In July 2015, Bombora was bought by the US tech-giant Neustar Inc, which had an office in Melbourne. (Since 2020, the domain registry part has belonged to GoDaddy.)

A renewed application was made by the Holy See in 2016, and the registry service was still named as ARI. The address given for ARI was Level 8, 10 Queens Road, Melbourne, with a US office in California. Neustar used the same address and apparently continued to trade under the name ARI until 2019. So despite some inaccuracies in The Daily Compass’ reporting, it is highly likely that legitimate payments were made from the Vatican to the Melbourne office of Neustar during the time period in question.

The Australian Catholic Bishops Conference was asked to confirm or deny the claim that the secret payments were related to the domain name, but at the time this article went to press, there had been no response.

When the controversial money transfers became known in 2020 via an Italian news article, it was speculated that they were somehow involved in framing Cardinal Pell on charges of child sexual abuse[3]. This suggestion was immediately denied by Becciu and his legal team. A second theory quickly arose: a source in Rome told Vatican reporter, Ed Pentin, that the funds were sent to Australia’s Apostolic Nuncio for repairs to a gate. The Nuncio was later summoned to Rome by Pope Francis to give an explanation of the latter allegations, but no official explanation was offered to the public at that time.

He divulged, however, that he had been very well paid to accuse Cardinal Pell.

A third theory was later put forward by Msgr Alberto Perlasca, the former Secretary of State official whose testimony implicated Pope Francis in the shady Sloane Avenue real estate deal. Perlasca claimed that the money went to the Australian Bishops to help pay for Cardinal Pell’s legal expenses, something strenuously denied by both Pell and the ACBC. This should prompt us to ask why Msgr Perlasca would deliberately perjure himself while he was in the midst of trying to clear his name, over a matter which can easily be disproved.  Is it possible that he had been misled by someone within the Secretariat?

The Victorian state police went on to investigate the transfers and found that there was no wrongdoing, also declining to make known the nature of the payments. But that was not the end of the matter.

Several months later, an Australian Senator brought up the issue of the transfers in Federal Parliament, requesting that the Australian Transaction Reports and Analysis Center (AUSTRAC) investigate the mysterious payments. AUSTRAC did investigate but in an embarrassing gaffe, exponentially over-estimated the total amount. The figures were recalculated but no details of the transactions were released.

Sadly, this young man died of a drug overdose at the age of 31, but apparently went to his grave maintaining his story.

An official statement from the Vatican came in January 2021, saying that the sum covered ordinary expenses including “contractual obligations.” However, an initial investigation by the Bank of Italy, the Vatican bank and AUSTRAC had found that only $7 million of the $9.5 million sent from Rome to Australia since 2015 was accounted for, leaving just over $2 million outstanding.

In September last year, The Pillar confirmed[4] that this $2 million had gone to Neustar and that Cardinal Becciu had personally approved two of the four payments. So, while The Daily Compass claims that Becciu has been exonerated because there is now “proof” regarding the transfers, there is no such thing.

In reality, we are no closer to knowing the truth. All we know is that Neustar provided domain registry services for the Holy See from around mid-2015 and that it had to be recompensed for this work. We do not know whether payment for Neustar’s services was part of the approved expenses accounted for above or whether it was confined to the secret ones. As a further complication, Neustar’s pro-Democrat American arm has been implicated in Hillary Clinton’s Russia-hoax operation, which could call the integrity of the entire corporation into question.

The most baffling part about this is that the newly “transparent and accountable” Vatican financial apparatus has not been at all forthcoming about the transfers. Securing the domain “.catholic” is a legitimate expense for the Church and hardly worthy of extreme confidentiality. Likewise, if the claim that the money was spent on maintenance at the Nunciature is true, then there would be no reason to keep that from the public. And it beggars belief that an official such as Monsignor Perlasca would not have known the destination of the funds, had they been sent to pay for a regular on-books expense.

It may be worth calling to mind a couple of details from the L’Espresso article that first broke news of the mysterious transfers. That article mentioned a potential witness from Victoria who claimed to have been abused by a priest - but it was not George Pell. He divulged, however, that he had been very well paid to accuse the Cardinal. Sadly, this young man died of a drug overdose at the age of 31, but apparently went to his grave maintaining his story.

Dead men might tell no tales, but they do occasionally leave a few clues. If nothing else, this latest installment in the Beccui-Pell affair should serve to remind those who know the truth that it is only a matter of time until their parts in the Vatican’s diverse intrigues are brought to light.

[Comment Guidelines - Click to view]
The Remnant values the comments and input of our visitors. It’s no secret, however, that trolls exist, and trolls can do a lot of damage to a brand. Therefore, our comments are heavily monitored 24/7 by Remnant moderators around the country.  They have been instructed to remove demeaning, hostile, needlessly combative, racist, Christophobic comments, and streams not related to the storyline. Multiple comments from one person under a story are also discouraged. Capitalized sentences or comments will be removed (Internet shouting).
The Remnant comments sections are not designed for frequent personal blogging, on-going debates or theological or other disputes between commenters. Please understand that we pay our writers to defend The Remnant’s editorial positions. We thus acknowledge no moral obligation whatsoever to allow anyone and everyone to try to undermine our editorial policy and create a general nuisance on our website.  Therefore, Remnant moderators reserve the right to edit or remove comments, and comments do not necessarily represent the views of The Remnant.
back to top
Last modified on Sunday, April 24, 2022
Tweet

More in this category: « The Politicron Variant of Free ABERRATION INDOCTRINATION »