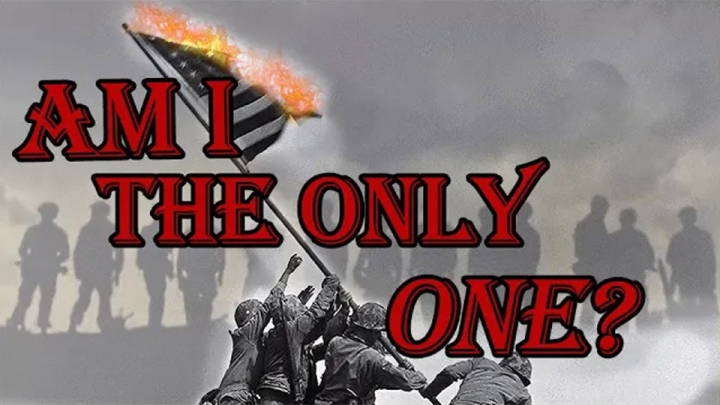 As Team Biden continues to dismantle America and totally corrupt her schools and military, we're left to ask: Just who are the real haters in America today?

This new song by Aaron Lewis has rocketed to the Number One spot on the Billboard chart after debuting within the top 15 of the Hot 100 on July 2, 2021.

Why does this matter? Because Lewis is being panned by the Left for his "controversial" single which they say is "pandering the radical right" in America.

So it's now "controversial" and "radical" to oppose the burning of our flag, resent the simpering leftists like Bruce Springsteen, and honor the fallen who died in the line of duty?

Really? Most Americans are okay with flag burning? I don't think so. It's time to turn the hate train around and point it in the direction it should going, against the radical Left who hate everything from God, to country, and family.

Mr. Lewis is no traditional Catholic, but what he's writing about is the Christophobic attack on everything that came before, including and especially patriotism and love of country. The same globalists who want to destroy America also are trying to destroy Christianity.

So, yes, strange bedfellows indeed. But thank you, Mr. Lewis, for reminding Americans that love of country is not a bad thing, that patriotism is a natural virtue, and that despite America's many sins and flaws she is still worth fighting for.

We honor the memory of the fallen by doing everything we can to deliver our country from evil, and to turn back to God rather than turning our backs on Him.

Using old photographs of his father in World War II, RTV's Michael J. Matt uses this song to urge viewers to not let the globalists and the socialists trash the land of our birth, the land our fathers defended, the land our mothers civilized and the land our children will grow old in.

Stop hating America, and start loving her enough to work to heal her soul... and make her truly great again. Eternal rest grant onto all those who died for the American hearth and home.

May they rest in peace, and may we never forget.

Am I The Only One
by Aaron Lewis

Am I the only one here tonight
Shakin' my head and thinkin' somethin' ain't right
Is it just me? Am I losin' my mind?
Am I standin' on the edge of the end of time?
Am I the only one? Tell me I'm not
Who thinks they're takin' all the good we got
And turnin' it bad, hell, I'll be damned
I think I'm turnin' into my old man

Am I the only one, willin' to fight
For my love of the red and white
And the blue, burnin' on the ground
Another statue comin' down in a town near you
Watchin' the threads of Old Glory come undone

Am I the only one sittin' here
Still holdin' on, holdin' back my tears
For the ones who paid with the lives they gave
God bless the U.S.A
I'm not the only one, willin' to fight
For my love of the red and white
And the blue, burnin' on the ground
Another statue comin' down in a town near you
Watchin' the threads of Old Glory come undone

[Comment Guidelines - Click to view]
The Remnant values the comments and input of our visitors. It’s no secret, however, that trolls exist, and trolls can do a lot of damage to a brand. Therefore, our comments are heavily monitored 24/7 by Remnant moderators around the country.  They have been instructed to remove demeaning, hostile, needlessly combative, racist, Christophobic comments, and streams not related to the storyline. Multiple comments from one person under a story are also discouraged. Capitalized sentences or comments will be removed (Internet shouting).
The Remnant comments sections are not designed for frequent personal blogging, on-going debates or theological or other disputes between commenters. Please understand that we pay our writers to defend The Remnant’s editorial positions. We thus acknowledge no moral obligation whatsoever to allow anyone and everyone to try to undermine our editorial policy and create a general nuisance on our website.  Therefore, Remnant moderators reserve the right to edit or remove comments, and comments do not necessarily represent the views of The Remnant.
Last modified on Monday, July 4, 2022