All Hands on Deck: We Have to Fight Their Demonic Fire with Holy Fire 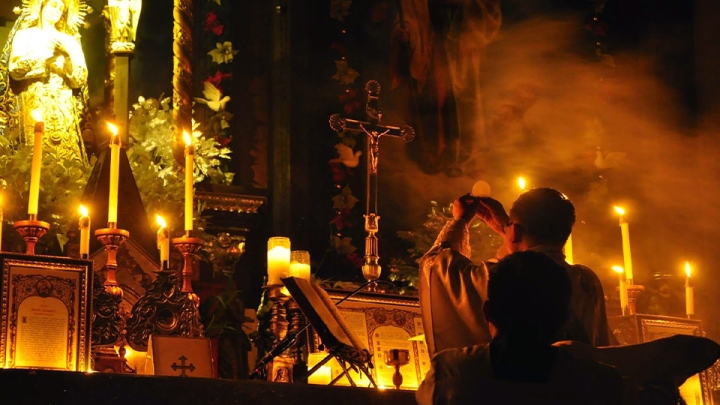 In his July 14, 2022 blog post, Fr. John Zuhlsdorf requested urgent prayers to avert a “serious act of persecution.” The next day, Fr. Zuhlsdorf updated the post to confirm that the request related specifically to Cardinal Blase Cupich’s apparent plans to shut down the Institute of Christ the King’s Chicago apostolate at the end of July. Aside from the refreshing reminder that we should always pray and sacrifice to obtain God’s grace, the series of posts highlighted a striking feature of the current crisis: once we learned of the then unknown “act of persecution,” few of us would have been surprised if it had been tremendously worse than the grave injustice against the Institute of Christ the King.

What is the significance of the fact that most of us are no longer surprised to learn that Rome is attacking traditional Catholics while championing those who make a mockery of the Faith? Almost everything emanating from Francis’s hierarchy is evil and insane, and yet entirely predictable. We know that God permits evil for a reason — for what reason is He is permitting this insanely evil crisis in His Church? More importantly, how does God want us to respond to these evils?

In 1986, traditional Catholics were arguably more persecuted by Rome than they are now and the pope had just signaled (falsely) to the world that the Church accepted all false religions.

As an initial matter, we should recognize that many faithful Catholics have been asking this question for decades, for good reason. Just consider John Paul II’s October 27, 1986 ecumenical prayer meeting at Assisi, as described by Henry Sire in his Phoenix from the Ashes:

“The appeal to the Second Vatican Council was freely made in justifying the prayer meeting at Assisi, and one would like to refute it by saying that nothing in the Council’s documents proposed such an act or authorised Catholics to associate with idolatry. One would say so if the appeal had not been made by Pope John Paul himself. He, who had attended all the sessions of the Council, emphatically asserted that the meeting of Assisi was a fulfilment of the Council’s spirit. There we have it, then, from no less an interpretative source than a pope. . . . However benign John Paul’s intentions were, they were tainted by a humanist philosophy that makes man the reference point of religious expression, and forgets that our duty to the one true God infinitely outweighs all other relations. Let us be clear: the guilt of the prayer meeting at Assisi did not lie in the gathering of non-Christian religions. It lay in the acts of idolatrous worship that the pope caused to be performed as the deliberate component of his gesture. The teaching of the Church for centuries condemned the participation of Christians in the prayers of a false religion, let alone the countenancing of idolatrous worship.”

In 1986, traditional Catholics were arguably more persecuted by Rome than they are now and the pope had just signaled (falsely) to the world that the Church accepted all false religions. Outsiders might have reasonably concluded that every religion was more pleasing to God than traditional Catholicism. This was 1986, from the man many faithful Catholics now call St. John Paul II.

How much evil in the world today might have been avoided if Rome had cared more about forming good Catholics than it cared about opening its doors to the hostile world?

Since then we have seen scandal after scandal building up to the evil insanity we see today. How many souls have gone to hell because of these scandals? How many Catholic institutions have been destroyed or, even worse, repurposed to advance evil? How much grace have we forfeited because priests and religious have abandoned the Faith and others have rejected their vocations? How much evil in the world today might have been avoided if Rome had cared more about forming good Catholics than it cared about opening its doors to the hostile world?

Some may argue that the great changes in the world have rendered it impossible for the Church to go on as it had prior to Vatican II. This might make sense were it not for the rather obvious refutation: those Catholics who have retained the traditional Catholic beliefs and practices have generally thrived despite the persecution from Rome. Traditional Catholics are the control group that prove that the post-Vatican II reforms have caused the great crisis in the Church and have contributed immeasurably to the increasing crisis in the world.

This fight for the true Faith has led many of us to appreciate it much more than we would have if we found a Tridentine Mass on every corner, Deo Gratias! As a result, it seems rather certain that we will find that many traditional Catholics have earned high places in Heaven by fighting valiantly for the Faith since Vatican II.

Even if we were agnostics, we would find it fascinating that the greatest secular villains in the world have teamed up with the apparent leaders of the Catholic Church to persecute Catholics who simply want to attend the Tridentine Mass.

Yet the fact remains that the situation in the Church is getting significantly worse, even if we have become inured to the evils from Rome. And, as Michael Matt’s recent talk on the so-called Catacombs Pact illustrates, the contagion within the Church has contributed significantly to the evils perpetrated in the name of the Great Reset. Even if we were agnostics, we would find it fascinating that the greatest secular villains in the world have teamed up with the apparent leaders of the Catholic Church to persecute Catholics who simply want to attend the Tridentine Mass and teach their children what Catholics had learned for almost two-thousand years.

If God is permitting the evils in the Church and world to threaten us more and more, we have to ask a rather uncomfortable question: could it be that God expects us to do even more to fight the growing cancer within the Mystical Body of Christ? In this regard we can consider Fr. Zuhlsdorf’s initial prayer request for the situation in Chicago:

“… get down on your knees and say, at least, a Memorare – which I advise in my 'Custos Traditionis' invitation.

If you can do this several times a day.  Do it.

If you can offer a few days of fasting.  Do it.

If you can spend time in front of the Blessed Sacrament. Do it.

If you can fortify your prayer with a good confession.  Do it.

This is ALL HANDS ON DECK.”

As Catholics, how could we argue against this? And if it is “ALL HANDS ON DECK” to fight the suppression of the Institute of Christ the King in Chicago — which it should be — what is the proper response to the broader crisis in the Church and world?

We know how the saints would respond: they would do all they could to cooperate with God’s grace; they would fight like their lives depended upon it.

God is permitting all of this for a reason. We know how the saints would respond: they would do all they could to cooperate with God’s grace; they would fight like their lives depended upon it; they would trust that they could do all things through Christ, their King, if only they put themselves entirely at His disposal; that is how they became saints. May the Blessed Virgin Mary help us learn, and never again forget, what she told the servants at the wedding feast in Cana: “Whatsoever He shall say to you, do ye” (John 2:5). We know what to do, now is the time to do it.

Our Lady, Queen of the Most Holy Rosary, pray for us!

[Comment Guidelines - Click to view]
The Remnant values the comments and input of our visitors. It’s no secret, however, that trolls exist, and trolls can do a lot of damage to a brand. Therefore, our comments are heavily monitored 24/7 by Remnant moderators around the country.  They have been instructed to remove demeaning, hostile, needlessly combative, racist, Christophobic comments, and streams not related to the storyline. Multiple comments from one person under a story are also discouraged. Capitalized sentences or comments will be removed (Internet shouting).
The Remnant comments sections are not designed for frequent personal blogging, on-going debates or theological or other disputes between commenters. Please understand that we pay our writers to defend The Remnant’s editorial positions. We thus acknowledge no moral obligation whatsoever to allow anyone and everyone to try to undermine our editorial policy and create a general nuisance on our website.  Therefore, Remnant moderators reserve the right to edit or remove comments, and comments do not necessarily represent the views of The Remnant.
back to top
Last modified on Wednesday, July 20, 2022
Tweet

More in this category: « The Democrat’s Alamo Things That Make You Go Hmmm »