Neo-Catholic Fantasies Exposed: A Powerful Wake-up Call from 'The Week' 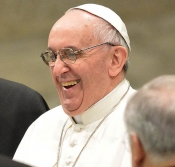 "During the post-Vatican II upheavals in the 1970s, 80s, and 90s, conservative Catholics developed a mental architecture that told them that even if their parish priest or local bishop was lax, immoral, or even vaguely heretical, there was practically a living saint in Rome, whose unassailable orthodoxy, personal charisma, and good works were taken as the living sign of the indefectibility of the Church."

Catholics must learn to resist their popes — even Pope Francis

Too many are becoming party apparatchicks

(Founder and editor of The Slurve, a newsletter about baseball. His work has appeared in The New York Times Magazine, ESPN Magazine, Slate and The American Conservative.)

Pope Francis has a funny way of naming and shaming certain tendencies in the Church, using insults that are inventive, apposite, and confounding. His ear is finely tuned for the way the Catholic faith can be distorted by ideology. And I'd like to imitate his example when I say this: Most Catholics are completely unprepared for a wicked pope. And they may not be prepared for Pope Francis either. They are more loyal to an imagined Catholic party than to the Catholic faith or the Church.

Between Pentecost and the launch of Vatican.va, most Catholics did not have access to the day to day musings of their pope. The Roman pontiff's theological speculations have been of almost no interest to Catholics throughout history, and never became so unless he was a great theologian already, or there was a great controversy which the authority of the Roman church might settle. To the average Catholic living hundreds of miles from Rome the Faith was the Faith, whether the pope was zealously orthodox like St. Benedict II or a sex-criminal like Pope John XII.

MJM: One highlight among too many to count...

"Let me suggest that these two good Catholic men [Phil Lawler and Jimmy Akin] are acting not as church men but as party men, and falling into what Hillary Jane White aptly diagnosed as "papal positivism." Lawler and Akin are not alone. The bulk of Catholic media is devoted to moon-faced speculation about how the discreet governing decisions, words, and gestures of the pope are accomplishing some larger goal that we further speculate must be in the pope's head or heart. It's very easy to make the pope into a saintly super-hero when you act as his ventriloquist."

MJM: To read this outstanding article click here but then come on back and let us know what you think of the increasingly bizarre game of "Let's Pretend" going on in the neo-Catholic establishment.

Published in Fetzen Fliegen
back to top
Last modified on Tuesday, May 6, 2014
Tweet

More in this category: « St. Pius V: The Pope of Quo Primum Secretary General of Synod on the Family: “The Church is not Timeless” »