Francis’s Prayer for Peace Highlights Why We Will Have None 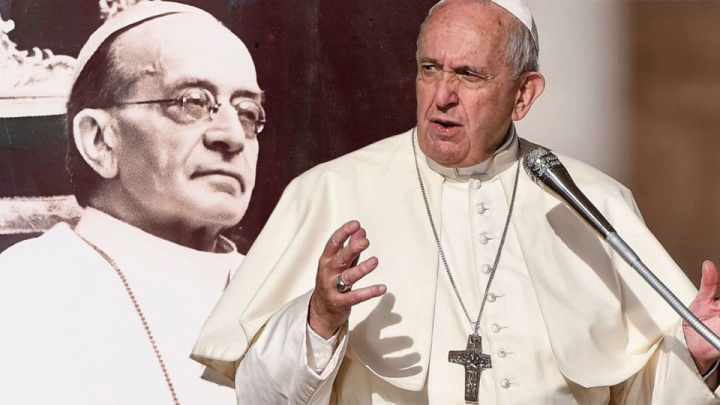 In his October 25, 2022 speech as part of the three-day prayer for peace at the Colosseum, Francis paid homage to the inter-religious dialogue championed by each of his recent predecessors:

“I thank each of you who are taking part in this meeting of prayer for peace. In a special way, I thank the Christian leaders and those of other religions, who have joined us in the same spirit of fraternity that inspired the first historic convocation willed by Saint John Paul II in Assisi, thirty-six years ago.”

As we have come to expect, he did not refer to Jesus or the Catholic Church that He established for the salvation of all people. Instead, Francis seeks peace through a process by which Christ is merely one committee member among the gods of the various religions, each chipping in to help solve the world’s problems.

Francis seeks peace through a process by which Christ is merely one committee member among the gods of the various religions, each chipping in to help solve the world’s problems.

Almost one hundred years ago, a true Vicar of Christ wrote of the actual connection between Jesus Christ and true peace. In his December 23, 1922 encyclical on the Peace of Christ in the Kingdom of Christ, Ubi Arcano Dei Consilio, Pope Pius XI began by describing the world he saw in terms which we could easily apply to our own time:

“Public life is so enveloped, even at the present hour, by the dense fog of mutual hatreds and grievances that it is almost impossible for the common people so much as freely to breathe therein.”

“A much more serious and lamentable evil than these threats of external aggression is the internal discord which menaces the welfare not only of nations but of human society itself.”

“To these evils we must add the contests between political parties, many of which struggles do not originate in a real difference of opinion concerning the public good or in a laudable and disinterested search for what would best promote the common welfare, but in the desire for power and for the protection of some private interest which inevitably result in injury to the citizens as a whole.“

“It is most sad to see how this revolutionary spirit has penetrated into that sanctuary of peace and love, the family, the original nucleus of human society. “

“We cannot but grieve over the great increase in the number of what might be called social misfits who almost inevitably end by joining the ranks of those malcontents who continually agitate against all order, be it public or private.”

“Men today do not act as Christians, as brothers, but as strangers, and even enemies. The sense of man's personal dignity and of the value of human life has been lost in the brutal domination begotten of might and mere superiority in numbers.”

Although we could apply these same words to our world today, we all know that the situation is now much worse than it was one hundred years ago. When we read the primary reason Pius XI provided for the evils of his own time, we can understand why we have reached the extraordinarily wicked condition we experience today:

“There is over and above the absence of peace and the evils attendant on this absence, another deeper and more profound cause for present-day conditions. This cause was even beginning to show its head before the War and the terrible calamities consequent on that cataclysm should have proven a remedy for them if mankind had only taken the trouble to understand the real meaning of those terrible events. In the Holy Scriptures we read: ‘They that have forsaken the Lord, shall be consumed.’ (Isaias i, 28) No less well known are the words of the Divine Teacher, Jesus Christ, Who said: ‘Without me you can do nothing’ (John xv, 5) and again, ‘He that gathereth not with me, scattereth.’ (Luke xi, 23) These words of the Holy Bible have been fulfilled and are now at this very moment being fulfilled before our very eyes. Because men have forsaken God and Jesus Christ, they have sunk to the depths of evil.”

Not only has most of the world abandoned God today, the vast majority of those identifying as Catholic have forsaken God. If Pius XI was correct, we would expect precisely what we see today — unchecked evil that threatens to consume the entire world.

Not only has most of the world abandoned God today, the vast majority of those identifying as Catholic have forsaken God.

Three years after Pius XI wrote Ubi Arcano Dei Consilio, he wrote Quas Primas, establishing the feast of the Kingship of Our Lord Jesus Christ to help remedy the evils he had seen in 1922. Among the many holy truths he presents in the encyclical, Pius XI wrote of the sin of placing Catholicism on the level of other religions:

“If We ordain that the whole Catholic world shall revere Christ as King, We shall minister to the need of the present day, and at the same time provide an excellent remedy for the plague which now infects society. We refer to the plague of anti-clericalism, its errors and impious activities. This evil spirit, as you are well aware, Venerable Brethren, has not come into being in one day; it has long lurked beneath the surface. The empire of Christ over all nations was rejected. The right which the Church has from Christ himself, to teach mankind, to make laws, to govern peoples in all that pertains to their eternal salvation, that right was denied. Then gradually the religion of Christ came to be likened to false religions and to be placed ignominiously on the same level with them.”

Pius XI intended the Feast of Christ the King to remedy the plague of anti-clericalism that attacked the Church, but today we have the man reputed to be his successor committing even worse sins against Christ and His Church than those perpetrated by the worst enemies of God one hundred years ago.

One cannot place the Church among other religions in the “pluralist world” without uncrowning Christ as King.

As Francis said, though, it was John Paul II who initiated the unholy fraternity with non-Catholic religions thirty-six years ago. And, as John Paul II explained so well, he was simply being faithful to the letter and spirit of Vatican II when he placed the Catholic religion “ignominiously on the same level” as false religions. Apologists for Vatican II rage against such assertions, but Yves Congar himself admitted as much:

“The Church of Vatican II, by the declaration on religious liberty, by Gaudium et spes — The Church in the modern world: significant title! — has been clearly situated in the pluralist world of today, and without abjuring the greatness it has had, had cut the chains that had kept it on the shores of the Middle Ages. One cannot remain fixed on one moment in history!” (cited in Archbishop Marcel Lefebvre’s They Have Uncrowned Him, p. 133)

One cannot place the Church among other religions in the “pluralist world” without uncrowning Christ as King. It is of course an offense even if a pagan does not recognize Christ as King, but for Catholics to insult Christ by placing Him among false gods is an abomination! And yet uncrowning Christ, through the promotion of religious liberty and false ecumenism, is the most important legacy of Vatican II.

As the world drifts away from Christ, we encounter worsening evils. Today even the apparent hierarchy of the Catholic Church has rejected Christ. As such, we are seeing unprecedented evils.

If we understand all of this, we can readily grasp much of what we see today. There is no peace without Christ. As the world drifts away from Christ, we encounter worsening evils. Today even the apparent hierarchy of the Catholic Church has rejected Christ. As such, we are seeing unprecedented evils. It is as if Christ is allowing us to experience the evil consequences of abandoning Him so that faithful souls will truly turn to Him as saints.

And indeed, as Pius XI knew, the only remedy for the evils of the world is to recognize Christ as King, with all that implies. Only to the extent that people and nations do that can they ever find true peace:

As Archbishop Marcel Lefebvre wrote at the end of his They Have Uncrowned Him, this is our task until we see the Blessed Virgin Mary triumph:

“The Holy Virgin will have the victory. She will triumph over the great apostasy, the fruit of Liberalism . . . We have to fight more than ever for the social Reign of Our Lord Jesus Christ. In this battle, we are not alone: we have with us all the Popes up through Pius XII inclusively. . . We have to hold on. We have to build, while the others are demolishing. . . . All that I know, the faith teaches us; it is that Our Lord Jesus Christ must reign here below, now, and not only at the end of the world, as the Liberals would have it!”

May the Blessed Virgin Mary always assist us in this battle, so that we never stop fighting for the reign of Christ the King. Immaculate Heart of Mary, pray for us!

More in this category: « UK Cardiologist on COVID Vax Mandates: Doctors and citizens have a "moral obligation to disobey" Bless Me, Father, For I Am Going Trick-or-Treating »