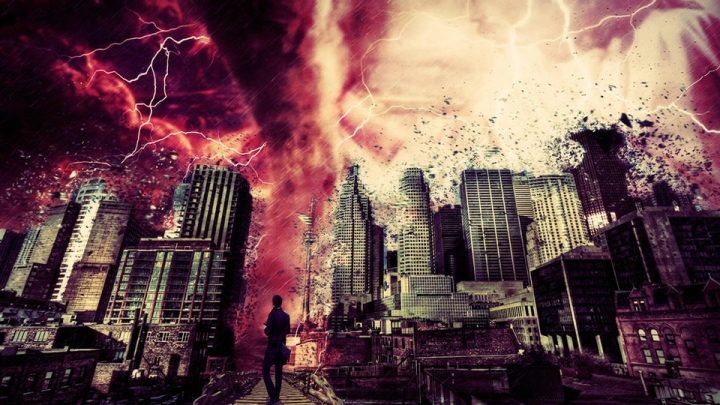 “Young and old, if we do not go toward the Savior and His grace, we have nothing left. It is always an error to cling to human values, but today it is fatal because these are crumbling.” (The Courage to be Afraid, p. 162)

As discussed in a previous article, when Fr. Marie-Dominique Molinié, O.P. preached the 1953 retreat (to Dominican nuns) that forms the basis for his recently translated The Courage to Be Afraid, he could not have known how truly prophetic and important certain portions of the book would be to those of us fighting the spiritual war in 2022. His discussion of the choice between humanism (taken to an almost demonic extreme) on the one hand, and the supernatural remedy that only God can provide on the other, is especially vital now — indeed, this may be the single most important lesson for us to learn today.

Fr. Molinié began with a picture of the traumatic shocks his generation had faced:

“We are a generation traumatized by so many shocks: those who lived before these shocks would not be able to understand us, and neither could we understand them. Those who cling to human nature, expecting renewal from the remnants of goodness or stability in man, are building a house on sand, in my opinion. The floor has fallen out from under the feet of the current generation; they suffer such a void of understanding, such a calling into question of what was supposedly a foundation, that humanly speaking, there is no saving the situation. Our nervous balance is too out of whack, we don’t even know what fidelity to our given word means anymore, or what it means to keep a promise.” (pp. 161-162)

“The floor has fallen out from under the feet of the current generation” — “humanly speaking, there is no saving the situation.”

If he could say this truthfully in 1953, how much more so we can say this about our own time! As he wrote, “the floor has fallen out from under the feet of the current generation” — “humanly speaking, there is no saving the situation.” Not only do those controlling the world today freely propagate the most obviously diabolical lies with impunity, almost all of the “good guys” within the Church and society scarcely seem to notice, let alone respond appropriately.

But, Fr. Molinié wrote, we should lament over this if we love Jesus:

“It is sterile to lament over that. If we truly love Jesus Christ, we will rejoice that there is no solution, there is nothing left but Him, the Savior. This is the right way of being ‘modern,’ and the only way. Even if they let themselves be taken in by mirages, what young people demand is realities. The only one we can give them is the love of God. When humanly there is nothing left we can do, this is the only thing that we can give: if we do not have it, we have nothing; we are good for nothing but being swept outside and trodden underfoot. This is true when we are in front of the dying, the sick, prisoners who have lost everything, or generally speaking anyone in despair. Ultimately, it is true for the current generation. God has allowed this to be so, and maybe He willed it, in answer to the Tower of Babel dreams of the 19th century. If we want to be modern, we cannot attach ourselves to human values, however good they are, because these are crumbling.” (p. 162)

We can meditate seriously over all of this, but Fr. Molinié’s suggestion that God may will this situation in answer to what he referred to as the “Tower of Babel dreams of the 19th century,” is especially stunning. The world has turned away from God so profoundly — and so much more since Fr. Molinié wrote these words — that God appears to be mercifully allowing everything to fall apart so that we will recognize our great need to look to Him, and Him alone, for the solution.

Fr. Molinié then discussed the humanists of his time, who of course would play such a tremendous role at Vatican II:

“The worst way to be ‘up with the times’ is to be a humanist. There were ages in which it was possible to be one, or at least not catastrophic. After all, it is a good approach to begin by loving man as he truly is, and from there to rise gradually toward the Kingdom. But today it is perhaps a dangerous illusion, because it dispenses us from looking for the true remedy. The unbalanced generation of today will not be ‘human’: it will be divine or demonic, supernatural or corrupt.” (p. 163)

When we look to Klaus Schwab and his fellow globalist lunatics — including those at the Vatican — we hear this suggestion that “God is dead” and we must reimagine a world based solely on human intuition, imagination, and talents.

This is what we see now, as the world, and even the Church, is increasingly divided among those who wish to be saints and those who follow the father of lies. When we look to Klaus Schwab and his fellow globalist lunatics — including those at the Vatican — we hear this suggestion that “God is dead” and we must reimagine a world based solely on human intuition, imagination, and talents. The Great Reset Tower of Babel covers almost the entire world, and increasingly looks to block out every bit of God’s goodness.

In his study of the way in which humanism played the dominant role at Vatican II, Prometheus: The Religion of Man, Fr. Alvaro Calderon echoed the dichotomy that Fr. Molinié described:

“If the hearts of men are not elevated to God by truth, upheld by the Magisterium, and by grace, infused by the sacraments of the Church, they necessarily fall into selfishness and are ruled by Satan. And what is true for the individual is also true for society.” (Prometheus, p. 178)

This is what we see today, perhaps more so than any time in human history. Satan’s domination, with the accompanying horror for mankind, will only increase until we turn to God.

But, as Fr. Molinié wrote, this is not cause for despair; rather, God permits it for our good if we will simply do what all souls have always been called to do, which is commit to Him with every fiber of our being:

“So we commit ourselves and we say ‘yes’ to God. Allow me to insist on this point: before our efforts, before our fidelity in detail, and before our initiatives, the first thing God asks us to say is ‘yes.’ This is not an ordinary act of virtue because it depends on the theological virtues alone . . . and the victory they obtain is rather a defeat, a surrender. What is going to happen afterwards? We do not know anything. Will we manage to hold on? We do not know that either, nor do we have to know: it is enough to trust, to give our trust. This little word fiat — this very simple and imperceptible act, by which we give ourselves into the hands of another — is the only collaboration that we can offer God: to say ‘yes’ to an action which is not ours.” (p. 163)

This commitment to God has always been a daunting task, but in our own time it is actually becoming easier as we see the demonic globalists demanding that we surrender to them instead. Will we give everything to God, Who will defeat His enemies and reward our faithful service; or will we enlist in the losing army, where the trials are infinitely worse and the reward is hell? The choice has perhaps never been easier to make.

Satan appears to have more power than ever today, and his globalists have committed themselves to tapping into it, even if they do so without full knowledge of its origin.

All of this talk of surrender to God’s will is consistent with what Jesus and all the saints tell us. Unfortunately, though, it can be so grating to our desire to exercise our “manly” virtues. But even if we fought the demonic globalists with all the heroic natural virtues of all the men who have ever lived, it would be like bringing a dull plastic knife to a gun fight in this current phase of the spiritual war. Satan appears to have more power than ever today, and his globalists have committed themselves to tapping into it, even if they do so without full knowledge of its origin. These are our enemies — if we do not completely surrender to God, we will ultimately surrender to these demonic globalists.

So we commit now, and then, as Fr. Molinié wrote, we continuously renew our fidelity to this commitment to God:

“In one sense, that’s all. Then we just have to be faithful to that movement once it is done: to ask ourselves if we are betraying our love by doing this or that thing. From time to time we have to say ‘yes’ to something new which we had not foreseen, to accept the crisis I have described — always in view of staying faithful to the surrender we already signed (at each new crisis, we hand over a few more weapons to the Conqueror). All of this without taking it lightly, but also without worrying. It is obvious that once we have signed a commitment, we can no longer act as if we had not signed anything — but we also should not be constantly asking ourselves, ‘Am I being faithful?’ No, God asks us to be as vigilant and attentive as possible, while staying peaceful and confident.” (p. 164)

When we do this, everything important in our lives will begin to head in the right direction. We will honor God, progress toward sanctity and salvation, and do as much as we can to cooperate with God’s grace in this fight against the globalist Tower of Babel. Every moment we delay simply gives Satan and the globalists more time and space to destroy all that is good in this world.

Latest from RTV — WHAT’S NEXT? (The G20 Summit & Future Lockdowns)

[Comment Guidelines - Click to view]
The Remnant values the comments and input of our visitors. It’s no secret, however, that trolls exist, and trolls can do a lot of damage to a brand. Therefore, our comments are heavily monitored 24/7 by Remnant moderators around the country.  They have been instructed to remove demeaning, hostile, needlessly combative, racist, Christophobic comments, and streams not related to the storyline. Multiple comments from one person under a story are also discouraged. Capitalized sentences or comments will be removed (Internet shouting).
The Remnant comments sections are not designed for frequent personal blogging, on-going debates or theological or other disputes between commenters. Please understand that we pay our writers to defend The Remnant’s editorial positions. We thus acknowledge no moral obligation whatsoever to allow anyone and everyone to try to undermine our editorial policy and create a general nuisance on our website.  Therefore, Remnant moderators reserve the right to edit or remove comments, and comments do not necessarily represent the views of The Remnant.
back to top
Last modified on Thursday, December 1, 2022
Tweet

More in this category: « The Mystery and Meaning of the Eucharist, as seen in the visions of Anne Catherine Emmerich THE CHURCH & STATE OF TYRANNY: Father Mawdsley Interviewed »