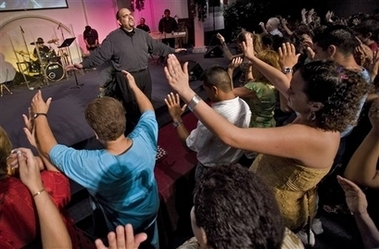 An article in the New York Times recently noted the sobering results of a Pew Research poll:

“It’s surprising partly because of the size of the decline in a short period,” said Cary Funk, a senior researcher at Pew. “We’re seeing an increase in religious pluralism among Hispanics, and also greater polarization on the religious spectrum.”…

Asked why they left their childhood faith, the two most often-cited responses were that they just “drifted away,” or that they stopped believing in church teachings.

This is the case despite the constant efforts of the Conciliar Church in the U.S. to appeal to Hispanics:

The Catholic Church has been working for years to increase its ministry to Hispanics. In a blog post this week, Sister Mary Ann Walsh, the spokeswoman for the U.S. Conference of Catholic Bishops, noted that the church is now requiring many seminarians to learn Spanish, that there has been an increase in the number of Hispanic deacons, and that ​​there are Hispanic bishops heading several large dioceses, including in Los Angeles, San Antonio, Sacramento and San Diego.​

But she acknowledged the challenge.

​Everyone, including Hispanics, and especially young ones, can fall prey to what has become a new American problem, religious relativism, where, perhaps inspired by exciting music or a rousing preacher, you move from your parents’ church to another to no church at all,” she wrote. She added, “It is scary to consider that religious relativism may be the greatest threat that exists to the increasingly important Hispanic Catholic community.”

Hmmm…let’s see if we can put two and two together here for a second and solve this conundrum for our friends at the USCCB.

First, what do we know? We know that the Church in the U.S. has been working “for years to increase its ministry to Hispanics.” It has also been providing countless Spanish Masses, Hispanic deacons, and the Pope has been appointing Hispanic bishops for large Hispanic dioceses.

We also know that despite these efforts Hispanic Catholics have been leaving the Conciliar Church in droves. Why? Sister Mary Ann Walsh says it’s because of religious relativism!

Could Pope Francis sending a video message to a Protestant televangelist calling him a “brother bishop” have given them this idea?” Maybe Cardinal O’Malley getting anointed by a Methodist minister? Maybe Cardinal DiNardo allowing his Co-Cathedral to be used for a Methodist “ordination” ceremony?

What about Vatican II? We hear a lot about that. Isn’t that being preached in the pulpits? What does it have to say about members of non-Catholic Christian denominations?

…For there are many who honor Sacred Scripture, taking it as a norm of belief and a pattern of life, and who show a sincere zeal. They lovingly believe in God the Father Almighty and in Christ, the Son of God and Savior. They are consecrated by baptism, in which they are united with Christ. They also recognize and accept other sacraments within their own Churches or ecclesiastical communities. Many of them rejoice in the episcopate, celebrate the Holy Eucharist and cultivate devotion toward the Virgin Mother of God.(16*) They also share with us in prayer and other spiritual benefits. Likewise we can say that in some real way they are joined with us in the Holy Spirit, for to them too He gives His gifts and graces whereby He is operative among them with His sanctifying power. Some indeed He has strengthened to the extent of the shedding of their blood…

Hmmm. What else does Vatican II have to say about Protestant denominations?

Moreover, some and even very many of the significant elements and endowments which together go to build up and give life to the Church itself, can exist outside the visible boundaries of the Catholic Church: the written word of God; the life of grace; faith, hope and charity, with the other interior gifts of the Holy Spirit, and visible elements too…

The brethren divided from us also use many liturgical actions of the Christian religion. These most certainly can truly engender a life of grace in ways that vary according to the condition of each Church or Community. These liturgical actions must be regarded as capable of giving access to the community of salvation.

It follows that the separated Churches and Communities as such, though we believe them to be deficient in some respects, have been by no means deprived of significance and importance in the mystery of salvation. For the Spirit of Christ has not refrained from using them as means of salvation which derive their efficacy from the very fullness of grace and truth entrusted to the Church.

Interesting. So if one works off the assumption that it makes no difference what religion one belongs to, how in the world do we keep Hispanic Catholics in the Church? Well, we can try to provide Masses in Spanish, give them Hispanic deacons, and appoint Hispanic bishops. Wait a second, we’re already doing that. It isn’t working.

Well, millions of Latin American Catholics are leaving the Church for the Protestant Charismatic movement. Let’s give them some “exciting” praise and worship through some “Charismatic Masses.” Also let’s add in some “rousing preachers” if that’s what they are leaving for.

But wait. Can’t they always get better Charismatic services and music and rousing preaching from the Protestants? Isn’t that what the Protestants specialize in?

Ok, I’m thinking outside the box here and I know this is going to sound crazy. But didn’t the Jesuits convert the entire populous of Latin America from the 1500’s on? Yes! So how did they do it? Well…they had the Council of Trent and the Traditional Latin Mass. Hmmm, fascinating! You mean the natives gave up their pagan practices and rituals and converted to Catholicism en masse through these missionary efforts? Yes. And they didn’t even have Mass in their native language? No.

Wow! This must mean that the natives were looking for something no other religion could provide. They were looking for the one true Church founded by God Himself to bring salvation to mankind. They were looking to participate in the redemptive act of Christ in the most intimate way possible through His Holy Mass. And to do this, they did not have to understand a single word of the Missal. And once converted they would never think to leave such a treasure of sanctifying grace for the showmanship of false sects.

A very interesting concept indeed and what fruits! However, as we know, this would never work in our modern age. Surely we can’t expect our Hispanic brothers and sisters in 2014 to be attracted to the Truth in our doctrine and reverence in our Masses. Surely it is not ecumenical to tell them that they cannot save their soul in any religion but the true religion. This would be most uncharitable.

Luckily we have one last recourse. No matter what nationality one is, one has to like mariachi music. After all, whenever one goes to a Mexican restaurant, who can resist being happy when the mariachi band plays! And in this my dear USCCB, we have the answer: Mariachi Masses! If we simply provide more mariachi music there is no possible way our Hispanic brothers and sisters will leave the Church.

Blessed Miguel Pro, Pray for Us!

Published in Fetzen Fliegen
back to top
Last modified on Tuesday, May 20, 2014
Tweet