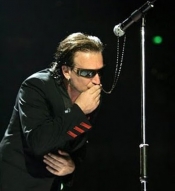 If even a worldly man  like Bono is given the grace to live long enough to see the folly of his youth it seems he still has a fairly good chance of drifting back in the direction of truth before he grows old. After all, what else is there?! Trouble is, he must first overcome the cocaine-like addiction to being worshipped by the world.  Would Bono have said anything like this when he was uber cool and U2 rocked the world?  Probably not in a month of bloody Sundays.

Obviously, his theology is flawed and he's not a Catholic.  But the Pope gave Bono a rosary once and the man never quite got over it (still wears it, in fact). It didn’t take much of the old Catholic thing, in other words, to really move this guy--- leaving one with the impression that had the human element of the Catholic Church remained what it was supposed to be, rather than trying to "get all cool" with the world, lots of these guys would likely have never fallen as far or as hard as they did, and many more would likely still be practicing Catholics today.

Springsteen, Sting, Bono and so many others--they're all supposed to be Catholic. But the Church of Vatican II became so ridiculous that they all just walked away instead.  Do you blame them? Really?

Published in Fetzen Fliegen
back to top
Last modified on Friday, July 18, 2014
Tweet

More in this category: « Up and Down, Up and Down: Follow the Bouncing Scalfari Interview, and More about that “Celestine” Jubilee Year Michael Matt to Debate Creighton University's Dr. Todd Salzman Tuesday October 13 in St. Paul, Minnesota »