As the whole world now knows, Robin Williams is dead. The comic actor allegedly took his own life after years of suffering from substance abuse and depression. The Vatican newspaper, L'Osservatore Romano, published a brief Aug. 12 article on the death of Robin Williams, calling the comedian/actor an “unforgettable clown with a heart of gold.” (I assume that was intended as a compliment)

I’ve never been a fan of the late Robin Williams. If I wanted Jonathan Winters I’d watch Jonathan Winters. That is not his fault, of course-- I just never got his humor. In fact, I remember feeling sorry for him the few times I saw him interviewed on TV. To me he seemed paralyzingly insecure, as though he suffered from some debilitating need to be accepted at every moment because he lived in constant fear that, for him, acceptance was always temporary. The incessant conversational jokes, harmless little cries for help, always to be met with howls of laughter, made me feel sad for him. Maybe that’s what depression looks like. I don’t know. Poor man!


It’s a tragedy all around whenever anyone takes his own life, or at least it used to be. In this case Williams left behind his own corpse for his wife to find and a beautiful 25-year-old daughter to fend for herself. His friends theorize that he suffered from “survivor’s guilt” because his close friends Belushi, Kaufman and Christopher Reeve had died young. But I don’t quite understand how, if that’s true, Williams’ way of dealing with it would be to leave everyone who would survive him (and who loved him) anguishing for the rest of their lives over the fact that they’d failed to save him. Talk about survivor’s guilt! On one level it’s comforting to think of him as mentally ill, for surely the alternative is monstrous.

Even though I didn't watch his movies, my heart goes out to Robin Williams. After all, superstardom is no way to live. Being worshipped like a god when you know you’re a sinner and a bum like everyone else must indeed be impossible to live with. News reports claim that he was very depressed because his TV series was cancelled, his last film 'The Angriest Man in Brooklyn' hardly opened and “he was in a funk." Life for a fallen superstar is evidently pointless--thus the tragedy.

Pretty much shockproof like everyone else is these days, it’s no surprise to this writer that Robin Williams’ suicide presents no obstacles to his being declared a national hero and role model. When I was a kid it was different. People whispered about those who’d “committed” suicide. A Catholic didn’t necessarily even get a Requiem Mass if he killed himself, such was the moral stigma attached to the mortal sin of suicide. It used to be against the law in every state in the union, too-- probably still is, at least technically.

Not so anymore. If killing an unwanted baby is okay for Mom, why shouldn’t Dad get to kill himself when the chips are down! Isn’t that the way it is in this God-free Utopia of ours?

Still, I’m just old-fashioned enough to wonder if maybe the anonymous blogger below might not be raising a valid point about Robin Williams' tragic suicide:

“Suicide is not OK. In the last 24 hours, even I, accustomed as I am to the boundless energy of the idiots and morlocks inhabiting Internet Space, have been shocked at the speed with which we have gone from lionizing Robin Williams to blanket condemnations of anyone who might be tempted to say that suicide is a bad thing to do. How dedicated and vigilant the Death Peddlers are who took up his death as a rallying point can be seen in the lightning-fast typing fingers of Dean Burnett who wags those fingers in our faces and warns us that saying suicide is so much as "selfish" is mean, nasty and "stigmatizing the mentally ill."

“We are, apparently, displaying, ‘a staggering ignorance of mental health problems.’

“There is a rush all over the internet to be the first and loudest to call for greater “awareness” of the agony of mental illness, drug abuse and alcoholism and their potentially devastating effect on the mind. Nearly all of them are predicated with some declaration that Robin Williams, because he was depressed, must be absolutely innocent of any wrongdoing in his decision to take his own life. I have been informed all day that “depression kills” in exactly the same tone of dire warning as those old seat belt ads from the 70s. The internet is awash today in lachrymose warnings against “blaming” those tempted by depressive illness to commit suicide.

“Do you think we rather enjoy feeling good about ourselves for being angry at people who say he did wrong? It feeds our egos to be angry at injustice. Isn’t there just the tiniest voice under the anger that whispers, barely audible, “What a good chap I am, how forgiving of Robin! How commendable it is to be angry with such unpleasant people!”

“I've spent most of the day today reading all the tidal wave of apologetics for suicide that this has sponsored. Even in the feeds of people, pro-life activists, who should decidedly know better. I'm more than ready to give Robin the benefit of the doubt. The guy was clearly troubled, and it's not up to me to decide who's in hell. But Catholics need to understand that they also don't get to decide who isn't." 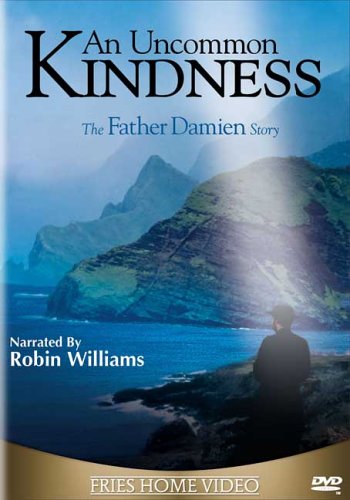 Indeed. One of our confreres posted on Facebook a clip of some Robin Williams' film that featured every other sentence heavily laden down with the F-word. The poster said it was the most powerful scene in movie history or some such thing, and that we needed to drop everything and watch it. He claims to be a big Latin Mass guy, too.

I’m no prude…or at least I didn’t used to be… but this sort of surprised me, not because Robin Williams accepted roles whose characters used that sort of language, but rather because a conservative Catholic thought nothing of posting it  in front of God and everybody on Facebook. I guess I just don’t quite get it anymore.

Well, God help Robin Williams—the latest in a long line of tragic lives cut short that prove money and fame are to happiness what water is to fire.

On a more positive note, here’s a little-remembered thing Robin Williams did that provides a ray of hope. It is a wonderful documentary about St. Damien of Molikai that was beautifully and emotionally narrated by Robin Williams. May God have mercy on his soul and on a society whose heroes are so fatally flawed. May he rest in peace.

Published in Fetzen Fliegen
back to top
Last modified on Thursday, August 14, 2014
Tweet

More in this category: « A Religious Order for Women with Down syndrome! The Papal Trip to Korea: An Anguished Catholic’s Perspective »