Karl Keating and the Lawyer’s Chisel 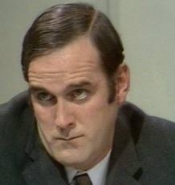 Karl Keating is alarmed. “That way madness lies,” shouts the title of one of his recent Facebook posts in a borrowing from King Lear.

What madness does Keating have in view? Could it be the madness at work in the “destruction of the Roman Rite” (Monsignor Gamber) or the “continuing of process of decay” (Cardinal Ratzinger) that has afflicted the Church since Vatican II? Could it be the madness at work in Cardinal Kasper’s insane proposal, praised by Pope Francis, to admit divorced and “remarried” Catholics to Holy Communion in defiance of the constant teaching of the Church, affirmed by John Paul II, that couples in such adulterous unions must commit to continence? Or could it be the madness that has swept the Church at large over the past fifty years, breeding homosexual predators in the priesthood, the “collapse of the liturgy (Cardinal Ratzinger), “silent apostasy” (John Paul II) and “diabolical disorientation” (Sister Lucia of Fatima) among the hierarchy.

No, it is none of these things. Keating has something much more alarming in view—indeed, an immediate threat that “will lead many readers into confusion and may lead some right out of the Church.” What could this menace to the faithful be that Keating would focus upon it in the midst of what would appear to be the greatest general crisis of faith and discipline in the Church since the time of the Arian heresy.

Hear ye! Hear ye! I will tell you: It is an article in The Remnant by Robert Siscoe, speculating on the theological implications of a study by the canonist Stefano Violi, “who argues that Pope Benedict did not intend to renounce the whole papal office but only its administrative aspects. Benedict’s intent ‘was essentially to split the papacy in two, thereby transforming the papal monarchy into a papal diarchy.’”

What? Siscoe has dared to speculate­ on Violi’s speculations about what the Italian press, led by Vito Messori, now refers to matter-of-factly as the quite unprecedented “two Popes scenario”?

No wonder Keating is so alarmed! Some might think that Siscoe’s piece is a rather ironic take on the latest novelty in the Church. No, no, no! This threat must be taken literally! For what could be a clearer and more present danger to the Faith than an article of this sort in The Remnant?

Why are so many prominent neo-Catholics all hot and bothered over the lil' ol' Remnant?
Subscribe today to find out!  Right now our e-edition is available for just $25!
Order your e-subscription today and see what gets
Karl Keating so worked up every two weeks!

Alright, Karl. Really? You once referred to yourself as a “recovering lawyer,” but it seems you never really recovered. A cunning lawyer, confronted with an opposing position that appears to be rock solid, will look for any little chink in which to drive his lawyer’s wedge in the hope of producing a crack and then an opening to victory. Keating has no serious argument against the Remnant’s ongoing coverage of the unfolding Bergoglian disaster, which even many of his neo-Catholic associates find appalling and frightening, but here he thinks he has found his little chink.

And so tap, tap, tap goes Keating with his little chisel, while the Church continues on its path of auto-demolition under a Pope who condemns proselytism, calls Protestant televangelist sheep-stealers his brothers, assures atheists that they can be saved by doing good, tells us that the Virgin Mary might have felt tricked by God and that Christ only pretended to be angry with his disciples, and telephones a woman in Argentina to advise her, speaking as “Father Bergoglio,” that she can receive Holy Communion even though she is living in adultery with a divorced man she “married” in a civil ceremony.

By the way, Keating’s loud alarum was featured by Mark Shea on his bloviating blogsite, where this overgrown child engages in high-school-level taunting of traditionalists, mocking them as “the greatest Catholics of all time.” Such is the caliber of the neo-Catholic polemic today, whose desperation increases with the rising level of awareness among serious, thinking Catholics that, as Dietrich von Hildebrand said in 1978: “The poison of our epoch is slowly seeping into the Church herself, and many have failed to see the apocalyptic decline of our time.”

Published in Fetzen Fliegen
back to top
Last modified on Friday, August 22, 2014
Tweet