Re: the SSPX 'Schism': Who's On First and What's on Second...I think 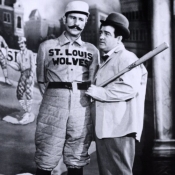 By the gracious permission of the higher direction of the Papal Basilica of Saint Peter in the Vatican, the faithful of the church of Saint-Martin-des-Gaules, Noisy-le-Grand (near Paris) -- who were in Rome for a summer vacation pilgrimage led by Father Michel de Sivry, of the Society of Saint Pius X (SSPX) -- were able to attend a Mass at the Altar of Saint Pius X, where the saintly Pope's body reposes. The Mass in the Vatican Basilica was celebrated by Fr. de Sivry on August 9, 2014, during this special centennial year of the dies natalis of Saint Pius X.Video: http://rorate-caeli.blogspot.com/2014/08/sspx-priest-celebrates-mass-in-saint.html

Published in Fetzen Fliegen
back to top
Last modified on Friday, August 29, 2014
Tweet