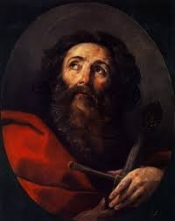 St. Paul Boasted of his Sins?

One commenter concerning my last blog post expressed dismay that The Remnant engages in so much criticism of the pronouncements of Pope Francis. But when a Pope who obdurately insists on improvising his homilies says one thing after another that any well-catechized ten-year old can see is wrong or highly dubious, every Catholic in a position to do so has an obligation to object.

Thus, when Francis—speaking, as always, off-the-cuff—says that Mary might have felt deceived by God, that Christ only pretended to be angry with His disciples, that Our Lord rebuked the Pharisees for their rigorist view of the marriage bond rather than their lax view of it, that Matthew clung to his money instead of following Our Lord’s call immediately, and that Jesus “had” a “Christian identity” when He was Christ Himself and the Word Incarnate, we cannot be silent lest our silence be viewed as consent. Just as John XXII (r. 1316-1334) met a firestorm of public opposition to his erring sermons denying the immediacy of the beatific vision, so must any modern Pope encounter loyal opposition when his erring opinions are instantly broadcast to the whole world.

Indeed it does, for Saint Paul said no such thing. What he actually said is: “Gladly therefore will I glory in my infirmities, that the power of Christ may dwell in me.” (2 Cor 12:9). As the Italian traditional Catholic blogsite chiesaepostconcilio points out, the underlying Greek word is ἀσθένεια (asthéneia) which, according to Strong’s Concordance, signifies “want of strength, weakness, illness,” not sin, ἁμαρτία, (hamartia). Not a single Bible translation, Catholic or Protestant, has Paul boasting of his sins as opposed to his “weaknesses,” “infirmities,” or “sufferings.”

No, Saint Paul was not boasting of his sins like Martin Luther, but rather proposing the typically Pauline paradox of glorying in our human weaknesses because they are repaired by the grace of Christ—precisely so that Christians can rise above sin rather than boasting of it. And this we are enabled to do by the grace of the Sacraments of Confession and Holy Communion, not merely by a vaguely defined “encounter with Christ” to which Francis refers at least a dozen times in the same homily, without ever mentioning the Sacraments as the divinely appointed means by which we encounter, receive, and sustain His sanctifying grace.

Furthermore, while we ordinary Catholics commonly sin, at least venially, even with the help of the Sacraments, it is gravely offensive to piety to suggest that we—much less Saint Paul, for Heaven’s sake—are not true Christians unless we “boast of our sins” (even ironically or paradoxically). Whatever Francis meant to say, the objective signification of his words gravely misrepresents the authentic teaching of Saint Paul, twisting it to suit what our Italian friends call “the very personal reading of the Gospel of Pope Bergoglio.” And we can only agree with their assessment that during this pontificate we are witnessing “things never seen, nor heard, from the throne of Peter.” That is saying a lot, given all that we have seen and heard since Vatican II. But it does no good to deny the obvious, nor can we allow the “normalists” to continue to insist that everything is fine, that all the doctrines are still on paper in the Catechism, when the Faith of our fathers is being undermined almost daily by a pseudo-Magisterium of Bergoglian improvisation.

More in this category: « God Help Us, I Fear They May Be Serious! Go Irish? Puh-leese! »