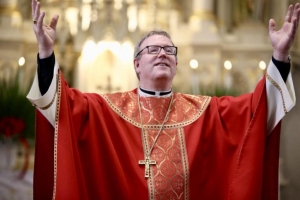 When he is not busy denying Adam was a “literal figure,” claiming there is “reasonable hope” no souls are in Hell, and assuring Ben Shapiro that Christ is merely the “priveleged route” to salvation, it seems Bishop Robert Barron likes to spend his free time attacking Traditional Catholics.

In an August 3 National “Catholic” Distorter piece, author Christopher White informs us that Barron hosted an “invite-only” Zoom meeting on July 29. Was this meeting to discuss Pope Francis’ troubling July 26 tweet that, on the memorial of Saints Joachim and Anne, referred to them as Jesus’ “grandparents” in quotation marks?

Was it to discuss what should be done about Vatican II and the New Mass as they continue to speed up the decline and fall of the Faith around the globe?

Was it to finally condemn the promotion of the pagan Pachamama idol at the Amazon synod?